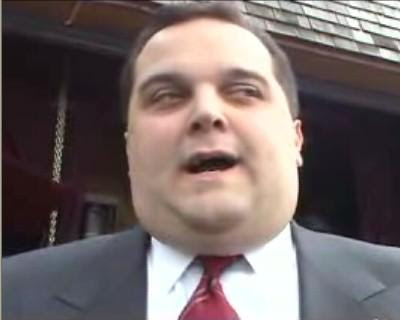 A former Queens Republican councilman is in line to be appointed by Mayor Bloomberg as a $172,311 commissioner at the Housing Authority -- considered a prime patronage post -- just weeks after the county's GOP endorsed the mayor's re-election bid, The Post has learned.

Sources said Anthony Como, ousted from his council seat last year by Democrat Elizabeth Crowley, is the leading contender to succeed Earl Andrews Jr. as one of the authority's three commissioners.

"I would say it's one of the best patronage plums in town," said a former official, expressing a widely held view about the high-paying post with few defined responsibilities.

Maybe he'll be able to pay off his fines and legalize his McMansion now...
Posted by Queens Crapper at 6:36 AM

Appointing this bloated, lawbreaking incompetent would be just one more proof of the Commissar's loathing of the people who live in public housing and for honest government.

Has this gelatinous mass ever spent - say, 5 minutes - on the matter of public housing?

Well, anyway, let's shorten his tenure and use of our tax money by dumping the Commissar on November 3.

The money will likely be spent on his McMansion.

Why is Ragusa or anyone in the Republican party pushing for Como, who has shown little ability and is entirely unimpressive, to get a plum patronage spot?

Can this be illegal in any way?

You know this is clearly political favor that he is getting this position. How the hell can this happen without any public input on this? He clearly has no regard for the housing in Middle Village which is evidenced by his own actions or inactions and amassing his own pile of fines and violations.

Someone with this kind of personal housing background should not be allowed the position of Housing Authority commissioner.

I am so sick of these politicians/Mayor thinking they can do whatever the F@#$K they want for their own agenda!!!!

Well, its yet another example that the community preservation people have their head up their arse ... and had better watch what is happening in (as they term it) Archie Bunker land.

The two bit bums out here are in position to really screw them.

housing? what the hell does he know about housing!!

he lives in a mcmansion so how is he going to help housing. god knows he doesn't need more money to eat.

Did it ever occur to you that he may have a thyroid condition??

come on italian girl it's the food. was married to an italian and i know we love to eat. i don't see how he's going to help housing, does he have any experience, living in a mansion doubt it.

I know that Linda. Just being an instigator.

ALL I CAN SAY IS WTF?

That poor man's shirt is choking him!

$172G for Anthony Como is a bargain! NY City Government is making out like a bandit, only having to pay $172G for this bright, young, vibrant, genius!

But now we may add Anthony Como to this illustrious list!

He will definitely work wonders for our housing market! I'm sure he'll solve the problem of affordable housing for all of New York City's residents, young and old, rich and poor, black and white!

And when he's done - he'll probably get hired by MTA, and he'll make the trains run on time, just like Mussolini!

One hand washes the other.

One of the best essays that captures better than anything the spirit of this place:

I hate the borough of Queens.

It's an unsightly place, full of the pollution that the rest of New York City won't tolerate being produced in its backyard.

It's full of immigrants who may or may not take their new country seriously.

It's full of longtime United States citizens, who decided decades ago that with as little learning and bravery and creativity as possible they could just about avoid any progress.

It's decorated in cheap wrought iron and gaudy fake-gold appliqué, like a prize out of a 25 cent machine in a grocery store.

Buildings keep going up all over the place as rents in Manhattan become too severe and people move east towards Queens and Long Island.

And that construction is of the poorest quality possible because the entire borough has been put up for sale by the smalltime crooks who are elected to run it.

Families hand down run-down diner or restaurant dynasties to their offspring.

Newspapers are bought out by the advertisers or the politicians who pay for their printing.

The old ladies, Italian or Greek or German, sit on their front porches and are very sure they know exactly the way life should be and why you are not acceptable.

The men make a lot of talk about what they won't tolerate and how they're not afraid to stand up to so and so and then quietly, with harsh lined faces, let themselves be hoodwinked again and again.

It's a place of sit down and shut up and don't you dare talk back you'd better like what's coming to you.

This must be part of Bloomberg's responsible economic plan.

Not that this stuff doesn't always happen, but Bloomberg just doen't give a sht and rubs it right in your face. He quite literally thinks he can do whatever he wants.

Unfortunately I don't think people care enought to vote him out.

I Told you so. Smart more. It's a better position than being council member. He played his cards the smart way and WON. He's the real winner of the council race.
Now he doesn't have to put up with all those morons in the council and gets more $$$$$.I actually like him, although his taste in homes is poor.
NEXT:Tony Avella . Trust me , he'll be the next one to play.
LETS MAKE A DEAL : NEW YORK STYLE
Come on down.
Elvis please save me.
Have a nice day.

Voiding the Void...
Care to finish the essay?

"I am leaving New York City within the next couple of months to seek out adventure in other parts of the globe. I made the decision last week. I will most definitely miss being a daily part of this crazy, mile-a-minute town, which I truly love. Maybe when I visit again I’ll put some time aside to make a special trip to Queens. I imagine then, I’ll see something quite different."

Call in the Feds!!! as someone on this site likes to say, and is 100% correct. This is our money! And what favors will he do while in that position?

Isn't this fat cock sucker one of the main council members that was strongly against the mayor during the term limits shit fest? Talking a lot of smack about him and what not? Now he's most likely gobblin up that little grinch dick with pleasure....

i wonder if Como can do anything about illegal basement apartments...uh oh Mr. Holden.

Hard working Queens families deserve better than this. We are being bled by these corrupt bastards. They should all look at that man who was sentenced to ten years yesterday!!! Wheelin', dealin' SOBs.

Now I'll get the commission to design every new housing project when this fat fu..uh ..I mean my good ole friend Anthony is running the show.

Anthony, let now that you're getting even more money for doin' not'in, let me design you a new house. We can convert your old MV house into a five family Section 8!

Councilman Ognibene will love that!

WELL SINCE THIS GUY IS MAKING THE BIG BUCKS NOW, forget with the mansion and he can afford a personal trainer. maybe he can help out the people in housing with food...god knows he could use less.

Hey, get a load of fatso.

And the icing on the cake is that the Housing Authority has three commissioners! Who are they? Moe, Larry, and Curly?!!!

leave my pal anthony alone, my job is to wipe the lint from the folds under his chin.

and while you're at it, please leave jake alone too. he can't help it if he stutters. it's an affliction. he's going thru a tough time.