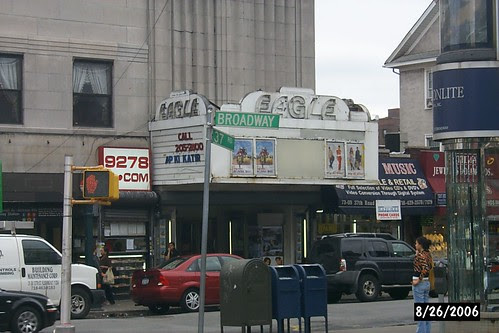 NEW YORK - (AP) -- A film industry strike in India is having an effect half a world away. A New York City movie theater has temporarily closed because of the Bollywood crisis.

In Mumbai, a seven-week-old strike by film producers over profits has brought India's film industry to a stop.

The 500-seat Eagle is in an ethnically Indian neighborhood. It is expected to reopen as soon as the strike in India ends.

Photo from butch stroll on Flickr
Posted by Queens Crapper at 12:15 AM

I'm sari to hear this.

..and like the rest of that part of Jackson Heights, it was remodeled into Calcutta slum style in the late 80's.

I'm sari to hear that too.

Oh you haven't been to Calcutta ol' buddy!

JH is paradise compared to it!