Riis Park: How the other half lives 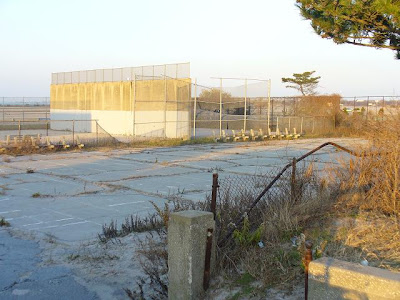 From the NY Times in 1988: "Jacob Riis Park...badly needs rehabilitation...neither of New York's powerful Senators seems to be powerful or interested enough to obtain the Federal funds required for this totally nonpolitical purpose..."

Sure, Chuck and Hillary got funds to restore the bathhouse, but what about the things you pass on the way there? 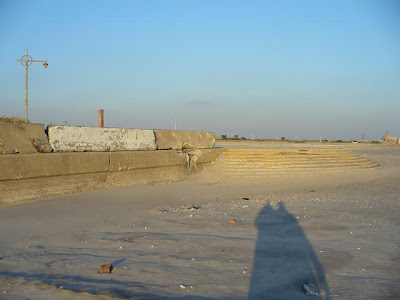 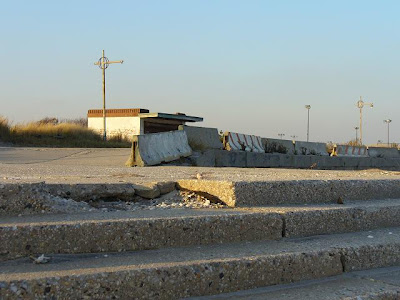 Planters would look much nicer and still be functional. 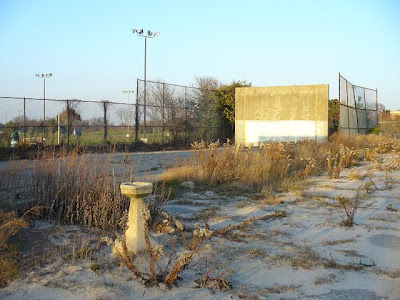 Having steps and handrails repaired and pulling weeds isn't too much to ask for, is it? 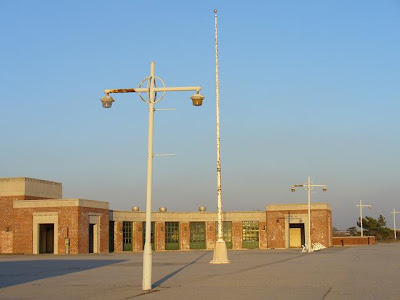 The decision to not fly an American flag here is, I believe, a wise one. 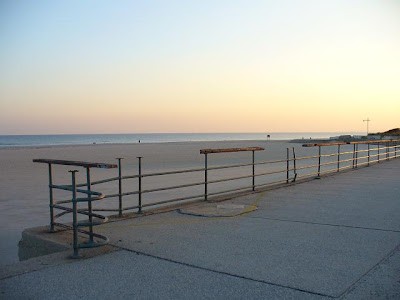 Riis shore is in sorry state 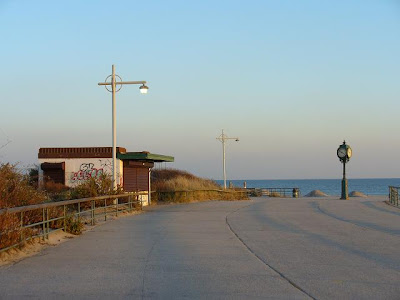 The drinking fountains look like Roman ruins, the railings seem to have been fashioned out of driftwood, the tennis courts and basketball hoops may or may not have nets, and the baseball-diamond infields are overrun with grass. 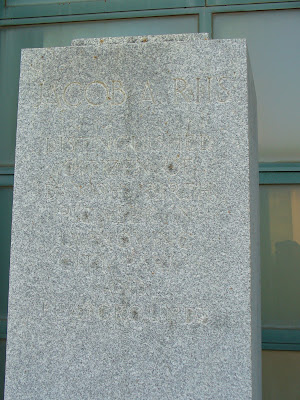 The barely legible inscription on this monument reads: "Jacob A. Riis. Distinguished citizen of Danish birth. Pioneer in improving city parks and playgrounds." It's too bad he isn't alive today. Maybe he could have fixed this mess. 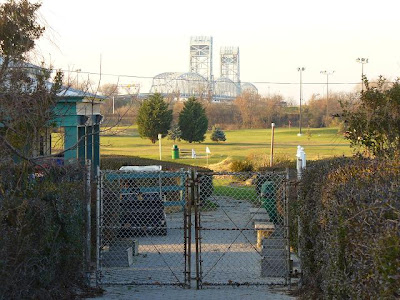 Hey this looks kind of nice. That's because it's a golf course. Yep, I believe I just heard ol' Jake roll over.

This is posted in honor of Mr. Riis, a pioneer in muckraking photography who showed the world just before the turn of the 20th century that the poor people of NYC were getting a raw deal. In the 21st century, it's now the poor AND the middle class.
Posted by Queens Crapper at 12:00 AM

Once again, good work crappy! You continue to expose the criminal neglect of this Parks Administration.
And we thought Flushing Meadows was in bad shape!

Riis Park is under the jurisdiction of the National Parks Service. Can't blame Adrian and company for this one.

if Rudy or Hil become Prez maybe federally funded projects like this park will fare better as both of these politicians have ties to New York.

Congressman Meeks has been approached with regard to the Riis park mess as well as Charles Park in Howard Beach. He seems to have been ineffective in both cases. When the feds took over both venues including Fort Tilden as part of Gateway National Park, the first item on the agenda was to but up fences and barricades to restrict access. Seems to me it should have been the other way around.The national park system is as broken as the the city system.

Riis Park used to be one of NYC's prime "cruising" meccas in the 1970s.

Maybe David Geffen can throw in some money to rehab the area.....h-m-m-m ?

It may have been a "cruising" location for those of an..ahem..."alternate" lifestyle but it was also a fully legal nude beach where a young and curious guy could meet very willing women...Women who are called "cougars" today...Oh ya, very fond memories of Riis.

Supposedly there are already funds in place for the rehab of Riis park in its entirety beginning after Labor Day weekend of 2008 and following through until a completion date for Memorial Day weekend 2011.
But we have heard this time and time again. The problem is monies are continuosly allocated for the rehab of Riis park by New York politicians (both Republican and Democrat) and then re-allocated by the "Parks Service" as the result of back room dealing when pork barrel agenda's are exchanged.
I.E. If you want proper funding for this (say Jamaica Bay) then we have to take from that (say Riis Park)
In the end, not enough people make their voices heard on this issue during campaign time to make these funds stick.
But I have selfish feelings regarding this issue. Riis Park has turned into a diamond in the rough. The water is cleaner then it has ever been in my lifetime and the cleanliness of the beach itself is near immaculate yet when you compare it to other beaches throughout the city it is not over crowded.
If Riis Park gets rehabbed we risk the chance of it becoming overcrowded like Coney Island or ghettofied like beach 116.
My point is be carefull what you wish for.

"the decision to not fly an American flag," at the decrepit site was "a wise one," to be sure.

Maybe the NPS should fly a white flag there instead -- to signify surrender and defeat.

Bay 1 was the place for that. The handball club started there was awesome. Rain, snow or sun dedicated to play, born to play.