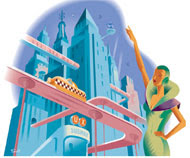 Predictions about the future were a staple of New York journalism in the early 20th century. Newspapers, including this one, frequently solicited prominent citizens for their thoughts on the future of the world, of America and, most urgent, of New York.

The World of Tomorrow

“When the expectations of wireless experts are realized, everyone will have his own pocket telephone and may be called wherever he happens to be,” one magazine predicted in 1908. Equally farsighted was a prediction made by Dr. Simon Flexner, the first director of the Rockefeller Institute. The same New Year’s Day that The World was conjuring gyroscopic trains, Dr. Flexner declared that human organ transplants would someday be common.

Some of the 2108 predictions printed in this article are already happening.
Posted by Queens Crapper at 12:04 AM

by the year 2050, I predict that toilets will be invented which will enable people to take a s*** while standing up.

Hi...who really knows what will happen in 2050. I'll be happy if I can just poop, let alone poop standing up.