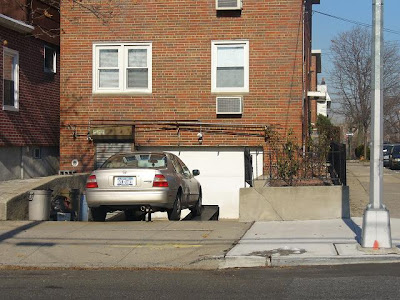 You never know what you're going to come across when you walk around in Queens. This get up, located at 56-64 60 Street is waiting patiently for someone to make a sudden steering wheel shift. It's hard to believe that something like this is not considered a public safety hazard. Actually, it is. Let's take a look at the garage. Hmmm....it seems to be sealed off, and that is because the owner applied to turn it into a "rec room". Meanwhile, he's accused of making 3 illegal curb cuts around the property; some of these complaints date back to 1996. The room conversion permit was revoked, but how much do you want to bet that it's already been completed? Does it look like DOB made an impact at this location?

Meanwhile, across the street.... 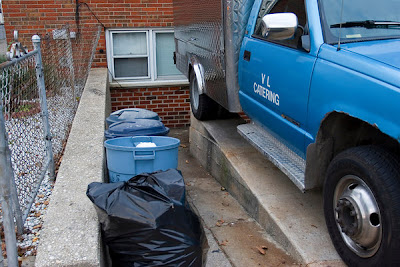 A permanent concrete ramp instead of a removable metal one. Genius! Also appears to be the same owner with the work done around the same time. DOB certainly has him quaking in his boots.
Posted by Queens Crapper at 12:00 AM

You know, I've always wanted to have a "Rec" Room...Billiards, Ping-Pong, and Foosball. Doncha all just love Foosball?

Lothario: "Hey, Sweetheart. Why don't we blow this joint and go back to my place?"

Actually, I kind of like that! It'd make a nice easy way to change the oil on my car.

There should be a law that limits the angle of these driveways.

Also, DOB should ensure that there really is a garage behind those doors or fine the owners a fee that ... hmmm ... equals the rent of a basement apartment.

Is it not sad that places like Pratt and Columbia and Hunter spend their time doing studies for the developers rather than doing studies to stop people from being exploited. These were principals that were estabislished by Riis and the Reformers A HUNDRED YEARS AGO FOR HEAVENS SAKE!!

Absolutely scandalous, don't you think? Who will take up the story and expose this inexcusable betrayal of the public?

it's got to be really nerve wracking to park a car up on that thing. Imagine trying it at night.

It's not that difficult to park on such a ramp. And it's also easier and safer to work under the car that way...