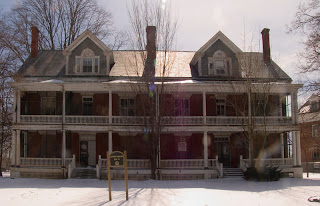 After a four-year battle, the Parks Department has agreed to allow the Center for the Women of New York to use one of its buildings as headquarters at Fort Totten.

The brick building — the former bachelor officers’ residence — was built in 1905 and is located next to the Bayside Historical Society headquarters (the former officers’ club). The interior contains 10 apartment-style units without electricity, running water or heat. The front porch is collapsing.

Once the agreement with the city is officially signed, the women’s group will begin restoration, which is expected to take a few months before the building is habitable. The facility is part of a landmarked district and the exterior has to remain intact.

See previous post about this building: The Fort Totten Historic District, part 3
Posted by Queens Crapper at 12:40 AM

a woman could really play a number on her husband when going to this Center by telling him she's going to be spending time in a Bachelors Quarters. :-o

Cheepskate Jawin has for years had a bug up her ass for this site. Why? It is totally inaccessible for the clientele that needs it. You wanna schlepp with public transportation for 2 hours from certain parts of the city to get there?

That old battle axe
tried to run for city council way back
but lost !