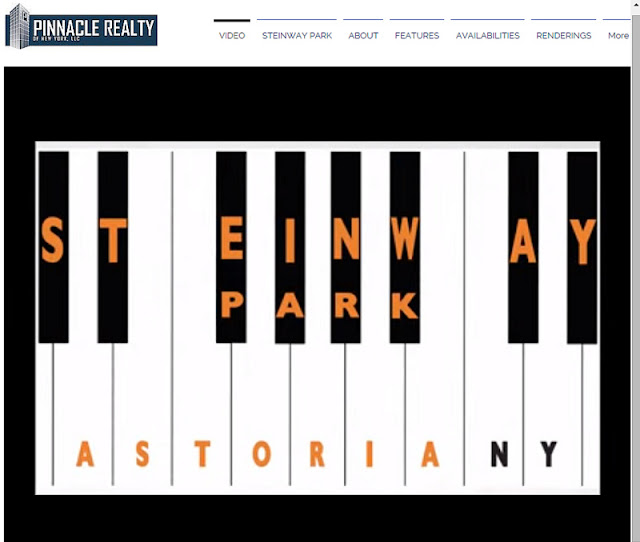 From George the Atheist 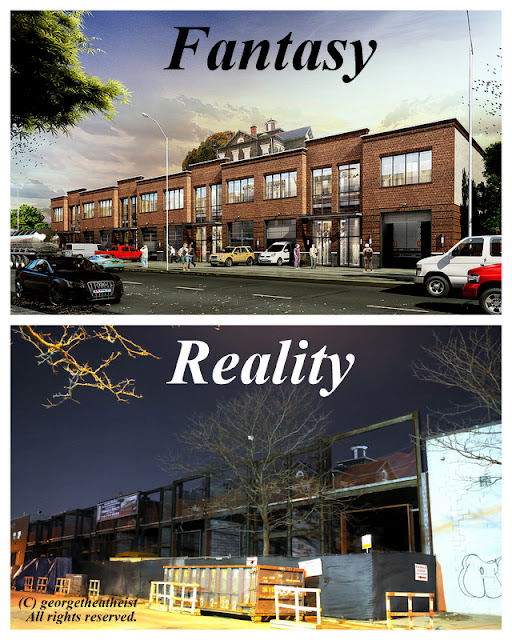 Posted by Queens Crapper at 7:43 AM

The developer assholes use a piano motif for their graphic logo and then promote the property with guitar music on the video. What do you expect? It's the ignorant Queens mentality displayed in all its "glory".

Will Steinway&Sons, with the factory a stone's throw from this disgrace, explore legal action? Using the piano in the logo and the prominent positioning of the name Steinway thereon?

Sitting outside the Mansion last night, in the pouring rain, looking up at the poetic beauty of the building, surrounded by the ugliness of the warehouse site. Contemplating the stupidity of those responsible. Check it out yourselves below:

It was a dark and stormy night.

Yes, Steinway & Sons owner, Queens-born and bred billionaire and philanthropist John Paulson (He-enamored-of-the-Steinway-name). I guess your forte is indeed the financial market and not the real estate one. There sits the near-to-the-factory dwelling of the forebears of your illustrious enterprise. Was on the market by the Halberian family for 5 million dollars and sold for 2.6 Million. That's the mansion and ALL the property that is now being developed with warehouses. And the total asking price for these 11 monstrosities? Over 22 million dollars.

LOL, what a joke. Unless the mansion get put on stilts, it will never be seen.

Also, i noticed how BOTH sides of the new building are seemingly woodlands, but in reality, warehouse walls.

Um, What park? More liberal use of erroneous titling and locale rebranding. The Piano District (South Bronx) comes to mind.

This is going to be devoted to pretentious and very bad art collectives or a We Work type of space. Note the indie rock music to grab the attention of the hipshits (kind of reminds me of Uncle tupelo or drive by truckers, but it almost sounds like the Outlaws "green grass and high tides")

Sick. These people are sick. The mansion looks like it's some sort of pigeon coop in that video.

A slick, stupid video about an ugly destruction of the area. Complete with a picture of 4 young douchebag reps and annoying harsh music. Includes a distortion of how convenient it is to get to---notice the N and R signs on their map, like it's a short walk.
A bunch of shit from the idea through the execution through the promotion.
Welcome to the new Astoria

The problem is the Halberians Landmarked the buildings. Everyone in Astoria knows that is the worst thing you can do to property - it takes away your control of the building and hurts property values.

Everyone in Astoria agrees with Costa that there is no crime here. As a matter of fact, we are all looking forward to what is going in here - a craft beer place, a few bars, a performance space, business jobs. Astorians think these buildings are perfect for the location and setting. There is little doubt they will sell like hotcakes.

Who needs weeds and wasted space. That mansion is a eyesore and white elephant. No wanted anything to do with it - now maybe it will be a bed and breakfast.

This place will make our community proud. When you say Astoria people will think of Astoria Park!

Next is 41 Street will be leveled prompting the destruction of the Steinway Stable and the mansion's caretaker house leaving the mansion all but inaccessible.

Why "Steinway PARK"? Because the morons responsible for this read Queens Crap and know that an actual park was proposed for this site. If you look carefully at the artist's rendering, you see trees to the right and left of the warehouses - where of course, none exist. Just other up-close warehouse walls. The illusion of the mansion high above the roofline of the warehouses subliminally suggests with the depicted bordering trees that there is indeed a park behind the warehouses. The tree foliage in the upper left foreground continues the illusion.

The Vallones seeme to have wanted the city to take it over, and if the script be followed, that would prompt millions of dollars and decades of studies ensuring that a small city of the well connected is subsidized for a long time.

So lets pull the rug out from under anyone else's feet so the second best thing happens - Vallone connected real estate guy sells the house to this. And they can still call it Steinway Park.

Heard the mansion may have been painted by a Vallone neighbor. Anything about that?

Yo, yo, my man. The artist left out the power plant smoke stacks and the stench of the sewage treatment plant. Whazzup wid dat?

Yo, yo, my man. The artist left out the power plant smoke stacks and the stench of the sewage treatment plant. Whazzup wid dat?
++++
Thai noodles, taco trucks, craft beer, bike lanes, and picture after picture of anthropomorphic kittens and puppies should make the Steinway Park a breathless destination for post after post on the community blogs (you know, the ones that have been studiously ignoring this from day one)

i hope the Steinway Park has a dog run. and a good one, like a million dollar one. only the best for the animals of the animals who destroyed the neighborhood.

Hey, at least they're offering "25 years ICAP tax abatment", whatever abatment really is. Abatement must be too mainstream...

The place is crawling with rats and has flooding issues big time. Like the roof top terraces providing easy access to the mansion. May be the only way to reach the mansion when they cut down 41st Street.

Katz? Crowley? somewhere there must be an adult.

By staying out all they do is make Astoria and Queens - as well as themselves - look bad.

Let up on Durst and Paulson - no one wants to deal with Looney Tunes.

But stay in your seats kiddies. Mack Sennett always delivers twists and turns. This one, 'Queens Tourism,' is a good laugh.

What the hell is going on over their? Makes no dam sense. I get a good laugh every time there is a update. This is just plain stupid.

Get over it! It's gone!
Next debacle!

Get over calling your native Queensite John Paulson angel to the rescue.
He is an ice cold hedge funder. He made his multi millions betting on poor peoples' losses.
He opted to give $100,000,000 to Central Park, which really deserves it and shunned Queens.
Why should he spend money caring about Queens , where its crooked politicians
would wind up squandering it for their own personal advancement?
This is the boondocks. Nobody comes here , whilst Central Park is one of the most visited tourist attractions in NYC!
Capeesh?

Astoria needs cleaned up. It is one of the things holding Queens back.

Costa troll. If the Steinway mansion weren't landmarked, this unique architectural gem would have been obliterated too.
Bend over . Suck your own. Get off of my dick! Go kiss the ass of your employer.

Steinway...an embarrassment?
Queens is an embarrassment!
Manhattan is king. Brooklyn has guts. Don't mess with "Da Bronx". Staten Island really belongs to Jersey.
That leaves mild mannered Queens, the laughing stock of NYC.
Roll over and bark for the biscuit!

Something's rotten in the state of Astoria said...

"Wait a minute, Mister Real Estate Salesman. You mean to tell me if I cough up 2 million dollars for one of these warehouses that there's no park there?! That when I park my car across the street and head into the warehouse, I won't be able to see the mansion and that your architect's rendering is not true to the facts?! You mean to tell me that there are other warehouse properties butted right up against what you're trying to foist onto me?!

Seems like, Mister Real Estate Salesman, that this "Steinway Park" is a lie and a scam."

Why in the presentation does it say ST EINW AY?


Who's St. Einw Ay? And what significance does he have with pianos and rapacious developers?

I don't think any mark gives a shit if the mansion is visible.

The whole point of all this hyper development, and it's not even subtle if you just look up, is to wipe out anything historic and co-opt and crop a bit of its legacy to promote their brand and profit from it's slight reference, like a leech , and claim the landmark status for their establishments.

Look at the manhattan skyline from a distance like from coney and jamaica bay, the empire state and chrysler buildings don't even register compared to other obscene behemoths south and north of them. Especially that cancerous growth on 57th and park, which isn't even finished.

You mentioned that the Friends of Steinway Mansion "could" not raise the money. That is not true.

This was to be a public/private partnership with elected officials playing an active role. News articles at the time had everything in place - from fund raising events to pledges of support from elected officials to help form the preservation community.

When the community's initial fund raising efforts started, Astoria's elected officials disappeared. They did not return phone calls nor showed up for events as promised. They went into hiding.

This hostile environment was not conducive to fund raising. For the record, the Friends "would" not raise the money unless the local elected officials honored their pledge to support the community.

If they did the mansion would have been purchased and would be well on the way to being restored.