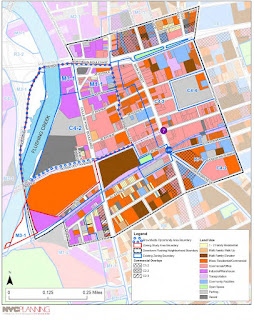 Two years ago, Mayor Bill de Blasio chose this unusual area named Flushing West as one of the first three neighborhoods (along with Brooklyn's East New York and the Jerome Avenue corridor in the Bronx) to undergo comprehensive studies for likely rezonings under his affordable housing plan.

Like other neighborhoods that are set to be rezoned, the proposal for Flushing has drawn some criticism—although there are also forces in Flushing that support a redrawing of the map for the area.

Before a rezoning could be contemplated, a study of the area was needed first, and the Department of City Planning’s Queens Borough Office began one last year. It focused on an areas below Northern Boulevard (on its north side) running west from Prince Street to Flushing Creek north of Roosevelt Avenue, and from College Point Boulevard west to the creek from Roosevelt down to 40th Road and the LIRR tracks. A sliver of undeveloped land on the west side of the creek, pinched between the water and the Van Wyck Expressway, is also included.

The DCP is not the first to study the area. The Flushing – Willets Point – Corona Local Development Corporation, led by former Queens Borough President Claire Shulman, received a $1.5 million grant from the state’s Department of State to redevelop the waterfront. The area is a brownfield site, one of many contaminated areas the city noted for redevelopment in 2011.

There are so many conflicts of interest here, and so little time to expose them all... Suffice it to say that all the usual suspects have their fingers in this pie.
Posted by Queens Crapper at 12:06 AM

Another study?
And which one of Wellington Chen's or Claire Shulman's friends will be conducting that study for mucho bucks?
When will granny Shulman be issued her orange jump suit?
"Former beep in prison"! That's the headline I long to read someday soon.

>There are so many conflicts of interest here, and so little time to expose them all...

Some details would be nice.