Underwater homes that have nothing to do with climate change 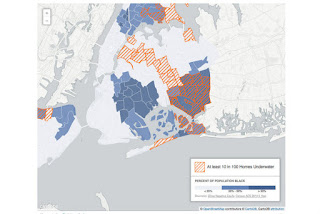 While much of the city has recovered from the 2008 housing crisis, a disproportionate number black homeowners in southeast Queens are still struggling, according to data analyzed by the Center for New York City Neighborhoods.

“Black homeowners in particular are facing a crushing reality: many often owe more on their mortgages than their property is worth,” the report said.

"For home-owners who bought in the early 2000s, white home values have recovered while black home-owners have lost net wealth in that time," said Leo Goldberg, a senior policy analyst at the Center for New York City Neighborhoods.

The hardest hit area of all is southeast Queens, particularly Jamaica.

“Jamaica is one of the only parts of the city where home values are lower than they were before the recession,” Goldberg said.

The data focuses on areas of the city where the majority of homeowners are black and where more than 10 percent of homes with a mortgage are underwater, meaning value of the loan exceeds the market value of the house. Large swaths of the Bronx and Queens, as well as parts of Staten Island are highlighted.
Posted by Queens Crapper at 6:49 AM

Just wait until the chinese run out of room in flushing and bayside....they will soon be there to turn jamaica into china too. It will soon happen probably in about 20 years or so. For now, they will just keep building illegal conversions until there is no room left in bayside.

Let's celebrate "Black History Month" (sarc).
Is it just a recurring coincidence that , during the subprime mortgage scandal collapse,
many "Black" or "people of (darker) color (ghetto, if you will permit the crude reference) neighborhoods were hit much harder than others?
Whether it was predatory lenders who screwed a lot of homeowners or the NYC Department of City Plotting etc. , a lot of these folks got screwed, and royally!
Call me what you will...but there appears to be an (unofficial, of course) ethnic cleansing process going on in high real estate value NYC.
Am I living in a fantasy world of my own creation? I don't think so.
NYC has seen a lot of nasty social engineering going on.
Face it. We are running out of "good" neighborhoods in the real estate market, so new ones have to be created.
Let's turn lead into gold. Let's gentrify areas like southeast Queens (south Jamaica, etc.) or East New York.
But, first you have to clear out it's "ghetto" population.
This can be done by mortgage forclosure. It is legal and appears , on the surface, not to be a discriminatory practice.
Now, kick me in the ass. I say that the subprime collapse was perpetrated by the banks and got a stamp of approval from our own government.
The United States of America cannot throw "undesirables" into concentration camps, but we can certainly approve shoddy mortgages.
Then when some poor dude loses his home, who was there to buy the foreclosed property for maybe half of what it was worth?
Bingo!
Assemble enough foreclosed properties in a "ghetto" then develop it into a new up coming nabe!
Luxury housing coming soon to south Jamaica. It's "troublesome" minorities have been removed.
We did the same to native Americans during our westward expansion.
No, I'm not a socialist. I am an observant truthful speaker.
Show me where a lot of so called "White" nabes have been similarly cleared for "luxury development" and I might agree with anybody who thinks I'm a crazy kook.
Further south..."Black" New Orleans neighborhoods have still not recovered from hurricane Katrina.
Just follow the minority foreclose or neglect map.

It's already happening in Forest Hills and Kew Gardens.

Regarding your "ethnic cleansing" or "social engineering" theories:...farfetched as they might seem:
There are many ways to legally "cleanse" a neighborhood.

In the 1960s it was "urban renewal and Black removal". The "slums" (affordable housing) went, and so did the people.
(Actually, Columbia University is still using the same crude tactics in Harlem).

i.e.
The newer Asian settlement in Flushing , in the late 1970s through early 1980s, was welcomed by its politicians.

Fine....terrific...nothing wrong with that.....
but....when you hear with your own ears.....former assemblyman, Morton C. Hillman (1987) state, "Thank God for the Asians. We did not want Flushing to become another south Jamaica"....one has to wonder about hidden racism that exists right here in the cradle of religious freedom.

Then we have some troublesome references by the late Senator Leonard P. Stavisky...appearing in the media...worrying about Flushing going down hill like the Grand Concourse in the Bronx.
It might appear that the local community board was also on board with these views.

The fear of "Blacks" and Latinos expanding into Flushing is now , pretty much, extinguished.
Flushing real estate has been boosted in value....inflated into the stratosphere and everyone in power seems to be happy.

This is only one example of such "social engineering" as you put it, in which I have great experience.

In Flushing, we give great hoopla to our "diversity and tolerance" but I'm afraid that there also is an underlying
hypocrisy beneath the surface.

Yes, let us all celebrate "Black History Month" , in its few remaing days!

The Chinese will never move into Jamaica until it's Blacks are first forced out.
They are the worst anti African American bigots ever created. Most Asians are.
There are documented examples of blacks being locked into a shop owned by Asians and the police called.
Why?
They were suspected of stealing!
The shop owners were immediately sued, I believe, successfully!

Worked in DC. That's exactly what they did.

All those sub prime mortgages the government under slick Willie forced banks to make are now coming home to roost? Who couldanode?

You are spot on. If I remember correctly, this was done in the 1950s and was called "block busting". Neighborhoods were decimated with the threat of having Blacks moved into the neighborhood. The rotten thing is now that Blacks have attained a modicum of property and respect the developers (REBNY) and our thieving polic-rats led by Dumblasio want that property too.

So much greed and to what end? How much money can you spend in a lifetime taken from those who are barely squeaking by?

All this is done deliberately. It's so unfair and is tied in with income inequality.

Predictably, it will only get worse.

The Community Reinvestment Act (CRA, P.L. 95-128, 91 Stat. 1147, title VIII of the Housing and Community Development Act of 1977, 12 U.S.C. § 2901 et seq.) is a United States federal law designed to encourage commercial banks and savings associations to help meet the needs of borrowers in all segments of their communities, including LOW- and moderate-income neighborhoods.

Congress passed the Act in 1977 to reduce discriminatory credit practices against low-income neighborhoods, a practice known as redlining.

The original Act was passed by the 95th United States Congress and signed into law by President Jimmy Carter on October 12, 1977.

The Act instructs the appropriate federal financial supervisory agencies to encourage regulated financial institutions to help meet the credit needs of the local communities in which they are chartered, consistent with safe and sound operation. To enforce the statute, federal regulatory agencies examine banking institutions for CRA compliance, and take this information into consideration when approving applications for new bank branches or for mergers or acquisitions.

This is where it all started. What is oft referred to as the "Carter Years".

Inflation and a malaise engulfing the country.

So many issues have arisen since then because the Government forces Legitimate Banking and Lending Institutions to provide credit to those who may not be worthy or qualified, perhaps for only the color of their skin.

We are headed to another meltdown. Fannie Mae (Federal National Mortgage Association) and Freddie Mac (Federal Home Loan Mortgage Corporation) are being held together by another Government Ponzi scheme, for now. Currently Auto Loans are running into much trouble combined with too many non-existent economic growth.

Hold on for quite a bumpy rocky ride again...

The chinese are already moving into jamaica.....one of the developers that put up new apartments there was chinese....I remember reading it a couple of years ago. Also, I seen some chinese in the Marshalls over there on jamaica avenue. So yes, they are slowly going to take over completely. Bayside use to be 25 percent blacks but that is no more.....the chinese took over and bought them all up. It's just a matter of time before they all flood jamaica.

Julia Harrison, who represented Flushing in the city council in the 1980's and observed the changes there first hand said it best, as quoted in the New York Times;

Those new immigrants, she said, were not like her grandfather, who arrived hungry at Ellis Island early in the century from Transylvania. "They did not come because of a potato famine or because some czar was conducting a pogrom," she said. "They were more like colonizers than immigrants. They sure as hell had a lot of money, and they sure as hell knew how to buy property and jack up rents of retail shops and drive people out."

She added, "The money came first. The paupers followed, smuggled in and bilked by their own kind."

The Chinese DEVELOPERS may be moving into Jamaica.
But how many Chinese are flocking there to reside?
Chinese hate Blacks. They fear them. They avoid them!
You are ill informed, brother!
You'll have Chinese landlords and slumlords but you will see precious few Chinese refers or buyers.
The Chinese are land lording Corona where they rent gouge Latinos.

And for Julia Harrison's truthful speaking, she was tarred and feathered as anti Asian.
One who joined the tar and feather Stavisky brigade , was former assemblyman Brian Mc Laughlin who was later put in federal prison for crimes committed. Toby Stavisky has, so far, escaped any indictments.
C'mon Preet, go after this shady dog!