Infrastructure upgrades for the tower people 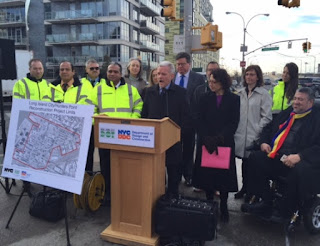 The Long Island City/Hunters Point area is about to get a $40 million infrastructure and roadway upgrade through funding allocated by Mayor Bill de Blasio.

Most of the roadways in the Hunters Point area have not been reconstructed since the beginning of the 20th Century, according to Department of Transportation Commissioner Polly Trottenberg. With Long Island City’s explosion of residential and commercial growth, plus the City’s emphasis on traffic safety stemming from Vision Zero, this area was identified as due for a makeover.

Well this should be applied to the entire borough, if not the city, no? Infrastructure everywhere is shot and overdevelopment is everywhere.

Also, in years long past, the infrastructure upgrades were put in BEFORE upzoning, not as an afterthought.
Posted by Queens Crapper at 8:06 AM

Don't be so snarky, most of the people who live in the area to be fixed are not tower people. Actually the work will be in the older part of the neighborhood not the water front area if you look at the boundaries on the map. There are a lot of residents in Hunters Point who don't live in the towers on the waterfront. I have lived here for 20 years and welcome the work on the roads especially 21street, 23rd street, 11th street and vernon which are major streets that are heavily used by those who are passing through the neighborhood.

I wasn't being snarky. If you think this is being done for the people who have lived in the area for generations, then there's a bridge in Brooklyn I'll sell you.

There is Councilman JVB, elephant ears and all. He's all ears when it comes to listening to the developers that overburdened LIC with overbuilding. Now he wants infrastructure improvements.

You are being snarky, and there's no doubt it's not being done for anyone who has lived here for decades.

Believe it or not some normal working class people live in LIC and are tired of being branded negatively. Boo hoo, the neighborhood changed.

The area needs supermarkets, shops, a movie theater. Why aren't politicians working on bringing that to the area?

They should also be upgrading the roads in jamaica as well. This thing called a road is like pothole city. It is gross and disgusting over there too. Why are the "hipster areas" the ones that the government pays more attention to? As if no other places in nyc need major repair work? I would have liked to see this article talk about throwing some money into working on jamaica but I guess that's a long shot.

That does not go very far.

It now makes for a great political photo-op.

All you get is a few paved streets, fill some potholes, an lot of speed humps, some new "shiny" "SLOW DOWN" signs...

Infrastructure upgrade by DOT = bike lanes, less travel lanes, and more parking restrictions. Be careful what you wish for.

The Tower People. I like that. His does JVB happen to get all of this money for parks, dog runs, libraries, roads, etc when all other Council Districts get crap? What's the deal here? Anybody know the answer?

It's pretty transparent now that selective sectoring is being implemented for funding that is not limited to priority snow removal. Although this has been the status quo for decades, but with the appalling hubris displayed recently by JVB and the newly prosperous hacks in the council it's like they are boasting about flipping off other areas still suffering and under served

As the crapper points out,Look where these improvements are taking place. All along the the areas where the pestilence of hyper-development and the ludicrous speculative pricing has taken place, LIC, greenpoint, williamsburgh, and the outlier towns of high end and frivolous spending of bushwick and astoria. It's become a Manhattan jr. across that strip if not a lame version of Dubai. But the real model may be silicon valley or foxcomm.

What will be interesting is how fast and competent these roads will be constructed. As roads and infrastructure have been languishing for decades and still in the most southern and eastern districts.Some examples I can think of is the recently posted 149st bridge, the neglect by the Howard beach train station, the continuing erosion of 108st and beach channel drive in Rockaway and the moon like terrains of jamaica and liberty avenues. (anyone have other examples, feel free to add on, I can't be everywhere).

JVB is another Faust for the predatory developers and rapacious realtors, just like his whore for Hillary boss Blaz, who has resumed his old campaign manager job (anything to avoid going to Staten Island). This dicknose is surely going to be considered running for mayor amongst his peers and fellow whores.

Maybe it's because JVB is butt buddies with the money guys.
Dog runs 'n dog shit. That's his platform. "Isn't it the greatest", our councilman has said many times.
Great for who Councilman Jimmy?
Jimmy wants to be mayor.

I wish people would stop saying the area "needs a movie theater" because NO IT DOESNT!!!! Go to Steinway if you want to see a damn movie.