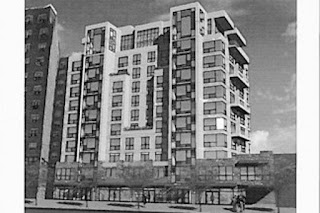 The so called Forest Hills' "Restaurant Row" could soon be demolished in order to make room for a new mixed-use development, a plan that has immediately sparked protests among local residents and business owners.

The new 12-story development is being eyed for a 1-story building at 107-18 70th Road, between Queens Boulevard and Austin Street, which houses several restaurants, including The Grill, Cabana and Moca Asian Cafe. An annual jazz series is also held on that block.

Two restaurants that closed on the block in the past 2 years — Santa Fe and Uno Pizzeria — have since remained vacant.

Currently the developer can build up to seven floors (roughly 70 feet), but according to elected officials they will be seeking a special permit from the city to build higher.

Of course they are!
Posted by Queens Crapper at 12:36 AM

Nobody goes over there, it is too crowded...

All this runaway impunity with the development industrial complex (DIC) has become some kind of 50's sci-fi invasion horror movie. Nowhere is safe. This administration and the DIC plan to poach whatever space, no matter how small or whatever lack of infrastructure that can handle it as long as they can profit. Hamilton Beach even knew it, although REBNY hasn't noticed them yet.

And nobody is going to live in those 80 AAMI (aggregate area median income, that's what it truly is). And has confirmed yesterday here, they are no affordable apartments being designated or even considered. And it won't be affordable to the true average income of the majority of poor people and even the middle class.

There was a protest in the Bronx where Mayor Big Slow DeFaustio was giving his presentation for the property poachers and pimps, of course as per usual involving the citizenry and hearings for THE PUBLIC, they were refused entry. People holding up signs saying "affordable scam". You can't get any more specific, it's a fucking infuriating scam, and it's designed to discourage people from living here.

Impeach or recall Mayor Big Slow, before he decides to finish his term and bail, which I think he will, considering that he did not take the unjustified raise. It was set up for the next neoliberal REBNY patsy (I'm looking at you JVB)

A million dollar apartment around the corner from Value Depot and across from a Target Exoress. LOL No indie restaurant will be able to afford the HIGH rents along Austin St. So get used to eating at chains from now on.

This is Queens with its rampantly crooked politics and a lot of "underutilized" land.
Translation:
A prime target for over development. Now Forest Hills feels the pinch of Flushingization.

Get over it. This isn't sacred land like the Black Hills of Dakota.
This is the same town that borough president Katz , a developers' whore, lives in.
Alley Katz's litter box. You have been betrayed by one of your own.

Who in the hell is going to impeach and try the mayor? city council?

With residents either resigned, clueless, and ready to cut their neighbor's throat if a politician tells them, nothing is going to change . that is until we find like overbuilt Harlem of century ago, 2 or 3 families start to share living space intended for 1 family, no one is going to do anything for quite some time yet.

Let's start voicing our opinions in person to the people making these terrible decisions on behalf of their neighbors and constituents!

Of course it wasn't listed on the CB6 website: http://queenscb6.org/calendar/. I just called and the person who answered will check into it, but this is the 3rd time there's no real information. Frustrating!

another reason why Queens is an eye rolling place for everyone else in NYC.

If you think your dining options are severely curtailed because a few places close off Queens Blvd - and you live in NYC - you must truly be a Queens Hick - or a hack hired to make sure that the last post of any thread here never knocks the culprits of 90% of our problems - city council.

Why would they build a building on a commercial strip that doesn't have stores on the ground floor?

Austin is an outdoor version of Queens Center Mall. Up next, a Hot Topic and a Joes Crab Shack

Once the restaurants are gone there's no reason to schlep out to Austin St. - the entire neighborhood will suffer!

This is densely zoned nabe. The builders will come.
The only high quality low zoned nabes are in north east Queens.

"Forest Hills".....how deceptive.
All I can see is "Brick & Mortar Hills".
And hasn't (excluding The Gardens) pretty much been that way for decades and decades?
Do you see any suburban homes along Queens Blvd?
LOL! See your optometrist!

AUSTIN STREET IS ONE OF THE FEW AREAS IN QUEENS WITH THE EXCEPTION OF BAYSIDE, ASTORIA WHERE THERE WAS ENOUGH VARIETY WHEN IT COMES TO DINING FROM ITALIAN, ASIAN, MEDITERRANEAN, LATIN.

IT'S NOT MANHATTAN BUT IT SURE BEATS A LONG TRAIN RIDE TO MIDTOWN FOR DECENT FOOD...