Boondoggle streetcar line will require that new bridges be built 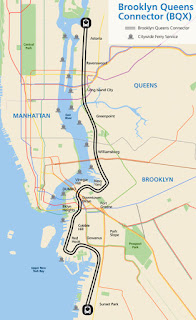 The Brooklyn-Queens streetcar proposed by Mayor Bill de Blasio could require the construction of two new bridges, one over Newtown Creek and a second over the Gowanus Canal, a top administration official said on Friday.

At a briefing for reporters, the official, Deputy Mayor Alicia Glen, and other administration leaders made public new details about the streetcar proposal, with the potential need for the two bridges among the most notable and expensive elements of the planned system, which would run between Sunset Park, Brooklyn, and Astoria, Queens.

While the exact route has not been finalized, Ms. Glen said, planners have determined that the Pulaski Bridge, between Greenpoint, Brooklyn, and Long Island City, Queens, and the bridge that traverses the Gowanus Canal at Hamilton Avenue near Red Hook, Brooklyn, may not be able to accommodate streetcars.

While a developer-driven yuppie connector streetcar is being planned for neighborhoods that already have subway lines running through them, residents of southeastern Queens will still require multiple bus transfers to get to a subway or the LIRR, and no one at City Hall cares.
Posted by Queens Crapper at 6:33 AM

This streetcar is the stupidest plan that I have ever seen in my life. The government doesn't even know how to run a subway system properly but yet they want to run a streetcar! What a freaking waste of money! What a bunch of idiots in office!

If we could make dedicated lanes to them, and figure out what to do with all the displaced parked cars from those land, they would be the perfect solution to a city that can no longer build subways economically.

Don't talk about Vice President elect DuhBlazio like that!!!😜

Streetcars are being successfully reintroduced in cities across the country. Not sure of this exact proposal, but it should be explored for NY.

Forgive them Father for they know not what they do.

And when the floods come or when the ice builds up, you can forget about using it to get to work.

Stupid waster of billions of dollars so that a few hipsters can pretend they are in San Francisco. The money would be much better spent building a new highway between southern Brooklyn and Northern Queens which is desperately needed and would serve much more people than a street car.

Why can't they just run a new bus line?? That would be much much cheaper.

This is to accommodate the waterfront hipsters and open up the East River for further development.
Tsk, tsk, tsk! Look at all of those Queens West yuppies who have to walk a quarter of a mike to the Vernon Blvd. #7 station in freezing weather. That's a twenty five minute jaunt on icy sidewalks, otherwise you break a leg.
LOL! Just wait until the underclass project dwellers in LIC board these white hipster jitneys!

According to a person near death and who once thought that, while running a city, he can relax and unwind by smoking crack and banging a hooker, thought that installing a light rail transit system on the streets of DC was a fucking stupid idea.

But let's put aside that Mayor De Faustio and his succubus wormtoungue underling, former vampire squid banker Ms. Glen are both fucking stupid, blind with ambition, opportunistic, and clearly shamelessly subservient to the development tourism gentrification industrial complex and imbecilic unsatiated billionaires, wasting valuable time trying to fulfill their warped vision of a new new york theme park and playground for frivolous spending idiots with disposable income and enabling another irresponsible investment bubble to grow. And let's look at what they are intentionally overlooking at what that 2.5 (and obviously more, now that bridges are in the picture suddenly) can go to.

Well, essential repair and renovation of the canarsie L tunnel. The way behind schedule of the 2nd avenue line.

And what about fucking shitibike. why not install more stations along the coastline, since riding a frickin' bike is actually faster than sitting on a trolley. And why not a bike lane under the elevated expressway where they plan to lay down track instead (why wasn't there lanes painted already?)

Select Bus service should be considered too.

But no, because that doesn't jibe with the master plan. The blandification and branding of a city. The realization that they want to turn it into a amusement theme park for the stupid rich, the stupid tourist and the stupid hipshit consumer.

This is going on nationwide in major cities and it's pretty much a grand conspiracy. From here to San francisco 2.0, portlandia, seattle and detailed thoroughly in New Orleans.

Sure sounds loony and paranoid (does it really?), but there was a picture in the sports pages a few days ago in the daily news of imbecile billionaire owner of the nets Mikhail Prokhorov (who did not even know who he hired as general manager of his team) inside a brand new facility and practice center for his lousy team in Sunset Park. Literally a playground for the rich. And look who's sitting there in director's chairs, smiling like smug little lapdogs....

And realize that their asinine concept streetcar is going to be ending precisely there.

And also realize that our Mayor is more interested in marketing than governing.

If light rail (trolley) was so great why did we get rid of them years ago?

Why don't they take care of the streets they already have? I have never seen as many potholes, sinkholes, waves, and asphalt so neglected it's actually turned to loose shingles as I do now. There are very few places where you can even drive your car safely at the speed limit, due to the many road problems such as those named above. And how about replacing burnt out street lights? There are sections where burnt out street lights have not been replaced for years, just hanging there dark. Before they start building new stuff whose need is highly questionable, they should take care of what they already have.

Bike lanes and streetcars are the moron's legacy.
The city's roads are falling apart, but hey the bike lanes are fine.
Take the train if you don't like the potholes.
Speed limit down to 25mpg, photo enforced, well on most roads you can't do more than 25mph anyway, because of the road surface.
Vision Zero is an accurate term, because he has no vision.

This line is designed to generate traffic for the benefit of Tower people/developers. Simple as that. It's not inherently a bad thing... many of the subway lines were constructed for the same reason (benefit and spur development) 100 years ago.

However, there are many more routes where a streetcar/light rail/BRT could be placed and actually alleviate traffic, like Utica Avenue, Main Street, and Woodhaven Boulevard to name a few.

Flooding a sewage laden river over a toxic brownfield and then letting the water sit in junior's nursery school and the hipster eating places makes one blanch just thinking about waterfront for anything but a passive park, but, then it couldn't happen to a better group of people.

BTW, what happened to Noguchi's collection during hurricane Sandy?

Let's see...a private, non-MTA linked, battery powered system (no overhead power lines, not that we need those either). My guess is 5 to 7 dollars per fare. Best of luck.

I'm still waiting on an explanation of why they don't use the money for more bus routes.

"I'm still waiting on an explanation of why they don't use the money for more bus routes."

Not enough waste and growth of the Leviathan...

Better off just using elevated double monorail T. Its done by "planting" the same prefab T modules of track & station that can be built in the shipyards on jigs.
Using 1000s of engineers and construction people to deal with all the street logistics will drive the cost insane overbudget and mobbed up if it's ever completed at all.
Not mentioned all the death and traffic accident lawsuits--read the west side railroad and "High Line" history. This mayor is such a jackass it's unfriggan believable !

Bridges? We don't need no steekin bridges!
Have Trump build some walls instead. LOL!