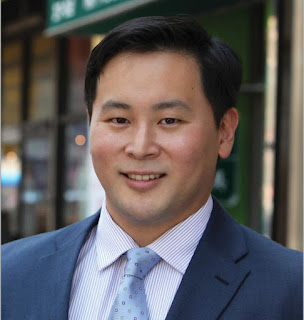 Perpetual Foreign Place Syndrome. That’s the term Assemblyman Ron Kim (D-Flushing) coined in a recent email to his constituents, lamenting that Flushing is not taken seriously by city or state agencies because it is viewed as a foreign place.

“Even despite this unfairness and mistreatment, Flushing continues to stay determined and resilient,“ Kim wrote. “But imagine if we actually overcame the Perpetual Foreign Place Syndrome and realize the return on investment toward Flushing?”

In a later interview, Kim explained the sentiment expands beyond Flushing, to places like Whitestone and Bayside, where middle- and working-class families, regardless of race or ethnicity, feel they’re brushed aside by the city and state governments.

“I think it’s all communities in the outer boroughs feeling like they’re not being heard, like every road leads to Manhattan,” he said.
Posted by Queens Crapper at 7:44 AM

Flushing is not taken seriously by city or state agencies because it is viewed as a foreign place.

Well it is a foreign place.
What is the problem with the truth Kimmy?

It is a "foreign place" ...often called, called "Little Taipei".
Maybe if there was some real assimilation of cultures, old and new, it would not be viewed as such.
Unfortunately there is a self imposed ghetto attitude among new arrivals that make them not considered part of mainstream New York, let alone Queens.
In other words, "Forget it Jake. It's Chinatown"!

That is the attitude that prevails.

It's Asian political representatives really do not care about this foreign factor either.
They are the political warlords. They have made it. They are the ruling class, secure with their place in the pecking order and their government benefits.

Asian pols' attitudes toward their Asian underlings...though not voiced...are, "Coolies, fend for yourselves. I sit upon the golden mountain now"!

So, tell me. Mr. Kim, what have you done about all this besides walk with your nose up the asses of the great Democratic dictatorship of Queens' leaders?
You are a career politician like the rest of these phony liberal-socialists. How much money from developers do you get greased with?
Everybody else gets their share to sell out Queens. Why not you?
YOU are part of the problem if you are not part of its solution. You are a cold cup of tea....a wishey washy follower of clubhouse politics.
Queens is the clubhouse cash cow. They are not reformers. Neither are you. Though you appear as a polite attender at civic meetings,
you have offered no real solutions.

WAKE UP DUDe !! YOU JUST MISSED THE TRAIN...

Why are these asians always playing the race card? Jamaica residents have been begging for funding for many many many years. Jamaica schools are in terrible shape, the court house on sutphin blvd is just really gross, the roads in jamaica are terrible. Flushing has 1/4 of the problems that jamaica has! Staten island as well as most of the bronx also is ignored!! Take a number Ron kim and get in the back of the line!!

Kim was talking about all of Queens, and other outer boroughs. Some of you seem to interpret how you want it to read.

This is Kim's initial statement in full. It's "Flushing" from beginning to end. Looks to me like he walked it back when contacted by the newspaper by claiming it was about all the outer boroughs.

Flushing is my hometown.

It's one of the most diverse places on this planet. More than 130 languages are spoken here. It's economic vitality is unparalleled in our state.

Yet, as I enter my fourth legislative session overseeing a $145 Billion dollar budget, I realize that the reason why top government leaders do not take Flushing seriously is because many see my hometown as a foreign place.

Instead of investing in our economic growth, our political leaders would rather call a state of emergency against our small business owners for six months, leaving hundreds of female immigrant workers out of a job.

Instead of alleviating the most congested intersection in the entire city (Main Street & Roosevelt Avenue) by creating long-term solutions, such as a green bus depot to manage the 14 bus lines, they would rather expand the sidewalk onto vehicular traffic.

Instead of holding the Port Authority accountable for the increasing airplane noise, they would rather undermine public participation while empowering special interest groups to add more airplane routes that will forever damage the quality of life in the Flushing areas.

Even despite the unfairness and mistreatment, Flushing continues to stay determined and resilient:

Of course he was talking about Flushing first, that's the district he represents. Are you trying to say that the rest of Queens has a seat at the table? It doesn't. Kim recognized that. It's a shame some on here would rather jump down his throat for talking about his own district first than agree with him that what is going on sucks for the whole of Queens, including predominantly white and black neighborhoods.

No, I'm not trying to say anything other than that this:

"Kim was talking about all of Queens, and other outer boroughs. Some of you seem to interpret how you want it to read."

is not quite correct, and then I speculated that he broadened it after being contacted by the press. He's had to walk back or amend statements and things he's done before. Nail salon laws and specialized high school admissions come right to mind.

I assume the jumping down his throat part doesn't refer to me, so I won't address that.

He didn't walk anything back here.

That articles about a lot more than Ron Kim.

If the Asian community would assimilate into America and stop building walls that push out and disrespect whites and blacks and start celebrating and embracing their new American culture more , then maybe they would lose that stigma of being foreigners or outsiders.

Queens gets ignored and you see it whenever there is any gathering of city wide groups.

People listen to you politely, then take things no further. It is subtle, but very obvious - and it did not exist even a decade ago.

The boro is stamped with a very bad reputation top to bottom.

Walk around Queens - good nabes and bad. Walk into its cultural institutions, its retail outlets, its institutions as medical care.

Now do the same outside of Queens. The difference in feeling is very distinct - even in chain stores as, for example, a Duane Reed.

Queens is the NYC's answer to the Hermit Kingdom. A place best left alone with the bones of those who tried to change it lining its roads cautioning the intrepid and foolhardy to advance no further.

Queens is invisible because it's voters are relatively invisible.
They vote for the usual machine suspects who have been using them for years....Vallone, Stavisky, Meng, etc.
What is it about Queens that dulls the brains of its residents?
New Yorkers drink the same water, so that can't be the problem.
Is it the air, then?
Could be. Between LGA and JFK, there are enough free floating toxins circulating.
They voted for you, Mr. Kim, a Dem machine pol who follows his marching orders from Virginia Joe Crowley.
With enough , follow the leader, pols like Ron Kim, Queens shall remain the ignored shit hole that it is perceived as by city hall.
There is your answer, Ronny boy. YOU are part of the problem!

If you want something spicy, vote for Kimchee.
If not , vote for the other Kim....Ron.....as dull as dirt.

Look at his mug, the soft boiled smiling visage of mediocrity.
Musta wiped the brown off of his nose for this shot.
Can't wipe off the stink though. Too many clubhouse asses have had Kim's beak inside.

Read the full stories on this in the news weeklies on this.
John Choe surely stuck his two cents in too.
Choe gets two salaries. One from his directorship of "One Flushing".
That's the group he set up.
The other from being leader of "Flushing Chamber of Commerce".
Very ambitious is John Choe.
With all of Choe's enthusiastic zeal,
please tell us, why does Flushing still look like and smell like rotting shit?
Of course , then , there are the usual complaints about the city
imposing too many fines on the poor Asian merchants for violations.

Noditol Choe wants Korea united. Not a bad idea, but what about Flooshing joining the western world instead of being isolationist?
Flooshing is an defacto Oriental province. This is self imposed sequestering. That's why NYC looks the other way.
As far as the rest of Queens is concerned, this borough really isn't mainstream so you can dump all over it. And the developers have!


CB7 chair, Gene Kelty, was quoted in one of the weekly newspapers
noting that if Flushing wants to attract more people shopping
then goods that appeal to more people need to be offered. Right on the money.
Clean up your act too, Dian Yu, Peter Koo, Grace Meng!
Why would the "round eyes" (as Asians refer to white non Asians) want to visit
a seething stinky dump?

LOL!
Kim looks like a Stavisky stooge right out of college...
clean cut but dirty just like the rest of his Democratic machine clubhouse pals.
Do not be fooled by his polite manners.
He is a political social climber. Cordiality and smiles DO NOT equate with action.
He plays follow the leader. Joe Crowley is the leader.