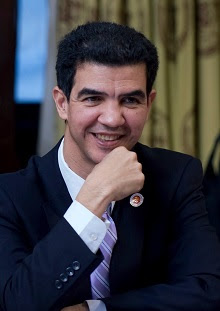 --Ydanis Rodriguez, during the first round of questions, took up his entire allotment yelling at Fritz Schwartz, who headed the Pay Commission. He explained that he loves his job, that he supports the 99%, but that he has to work so hard. He works 60 hours a week! He has to go to community meetings. People talk to him in restaurants. He believes that CMs deserve at least $175,000 per year.

Rodriguez kept coming back to the question of half-time versus full-time. He demanded to know what constitutes full-time, because he puts in so many more hours than that.

It became sadly clear that Ydanis Rodriguez thinks that “full-time” means you work 40 hours and then you go home. If you work more than that, then you deserve overtime. Could it be that he doesn’t understand the difference between an hourly and a salaried employee? Also, does he think that 60 hours a week is an unusual amount of work for a well-paid professional in New York? I know plenty of people who put in those kinds of hours…including Council staffers who make like $30k.

Rodriguez also claimed that some CMs “have Ph.Ds.” Is this true? I’ve never heard that. Unless he is thinking about Eva Moskowitz.

--Inez Dickens was mad that no one is taking into account all the groceries and funerals she pays for, for her needy constituents. She said that unlike other elected officials, CMs “are on the streets!”

--Ben Kallos also said that CMs never have time off. “If it is Christmas Eve and you are locking up your district office, and a resident comes by because he is being evicted, well there is no Christmas Eve dinner for you.” He contrasted this to citywide elected officials who supposedly don’t have to deal with constituents’ needs. Somehow he insinuated that he works harder than Michael Bloomberg ever did, which seems like a weird thing to say given Bloomberg’s reputation for total workaholicism. (Bloomberg once said, "I have nothing in common with people who stand on escalators.") Fritz Schwartz said that, when he was Corporation Counsel, he saw Bloomberg work quite a bit. Kallos sneered, “Um, I don’t weekend in Bermuda.”

Amazingly enough, Lander will not even be present on Friday to vote on the bill. How come? He is going on vacation that day. Sure, just taking off a few days in February when he thought the hearing calendar was clear, two weeks before the whole Council goes on its unofficial mid-Winter break. Doesn’t everybody do that?

The Daily News thinks so, too.
Posted by Queens Crapper at 8:51 AM

Readers: if you haven't read the entire article, you should. City Council Watch is a great website - every post a worthwhile read through its entirety.

"He works 60 hours a week! He has to go to community meetings.."
----------
Does anyone know how often during the week council members are required to attend? How long? All year round?

I AM SPEECHLESS...
IF YOU HATE YOUR JOB THEN DO SOMETHING ELSE !!

I saw on ny1 a great quote I wish I could find.basically it said that most of the Council were aids to previous councilmembers,community organizers or labor advocates and they'd have no income potential outside council.

My city councilman, Paul Vallone,
is a part time council member. He works the other part of his day in his law practice lobbying for developers.
He rarely works at all for his constituents.

FU!
The city council is a part time job.
They don't deserve half of e pay check they're getting.
Then you have those community board district managers.
CB7's get about $90,000 a year!

And some CMs have only a high school diploma. The question arises as to qualifications for these positions. Who will set the required qualifications and required experience to be a CM?

You want a raise?
Here, sit on this!

You forget to mention that Councilman Peter Koo owns "Starside Drugs" chain.
You voters must be on drugs to elect such shady pol's.

You work too long and don't make enough?

How about you take your 'talents' to the private sector!

What a bunch of f'ing lowlives.

When City Council Speaker Melissa Mark-Viverito spreads her legs and opens up her pussy and crook Ruben Wills spread his asshole open for dick, then maybe we can talk pay raise, otherwise City Council Member can all go fuck themselves.

They do shit, they cheat, they steal and yet they want a raise for what amounts to a part-time job. Many say they put in 60 hours or more a week by attending meetings, street naming ceremonies and other bullshit, but putting in all those hours and actually working are two different things. Wills put lots of hours in, but the majority of it was corruption bullshit.

There is something called ACCOUNTABILITY and JOB PERFORMANCE and most of you fuck heads fail in that department.

Im so glad Charles Baron isn't a councilmember anymore.
He was fucking annoying as hell.
He'll be missing out on the pay raise.

"You forget to mention that Councilman Peter Koo owns "Starside Drugs" chain.
You voters must be on drugs to elect such shady pol's."

Community meetings? Dizzy Lizzy will not ever attend, someone might ask her a question.

From the NY City Council rules:
"1.00. Stated, Special - The Council shall hold no less than two stated meetings a month, unless otherwise ordered, except during the months of July and August..."
-------
So they only have to attend 2 meetings a month, 10 months a year. No requirements how long each meeting has to last. Yea, they really need a raise!

Well the developers are his paying constituents!

With all the issues how can one have enough time and focus to run both a business and be a Councilman?

Not to mention other little issues like conflict of interest.

"People deserve the government they get, and they deserve to get it good and hard." - H.L Mencken

Some Community Board District Managers make 6 (six) figures! That's an outrage!!! And several don't even live in the CB district they work in!

I respect Ydanis for taking parental leave. What kind of world do we live in when you're considered lazy for spending time with your newborn baby? It should be standard for all Americans because it is in almost every other western country. I can also tell you that it is a lot of work and sleepless nights taking care of a newborn.

Nah, they brought out the orchestra!

I remember Ydanis at OCCUPY taking a few lumps with the protesters. It must have got him some populist cred to relate to the downtrodden and middle class. But I wonder if his baby will have potable water to bathe in, unlike the majority of his constituents who are dealing with and are probably fearful of the water they are consuming, which the local DEP official said in utter crassness that the iron in the water might be supplemental (never mind that he is making a spurious comparison, but how does he know it's iron?)

Lulus may be gone, but they don't give a shit, because they're self-appointed raises is just the last big score. They also don't have any sense of decency or shame of becoming self-parodies with their demented justifications. It doesn't seem to bother them that they will lose the votes of even their most loyal constituents.

These are suppose to be the progressives, the ones that care most about the bullied, the minorities, civil rights and the betterment of the poor.

They are full of lies and shit. These sociopaths are ruining democracy, and they must be defeated then tarred, feathered and shot out of the city via catapult.

His head! His head! Get your pitchfork!

Now I know where I've seen that shaped-head before.

Good for you. Enjoy him as much as you can.
Too bad he does not live in the area he represents.
He also tackles criminals when he has 5 mins.
I'll say multi talented.
Why don't you work improving his English and he can run for POTUS.

Is he even a legal citizen of the U.S.?

I knew I wasn't the only one who thought something odd about his head .

Not only the head put check out the exact positioning of the ears.

If it was Carmen then it was already vacant. Not much of a surprise she's back in the private sector.

Or Flattop from Dick Tracy.

Peter Koo has been MIA since he took office.
A wealthy man with his Starside drug business, who lives in Port Washington, in my book is shady!
A real devoted public servant DOES for his public, not just his wallet.
Thank you Koo troll for opening up the conversation.
Post again if you need further clarification.

I think you meant Kim who tackles criminals not Koo.
Two "Ks" ....different nationalities.
Yeah we know..."They all look alike".
Koo never tackled anything worthwihile.
He just pastes on his beautific smile whenever challenged.
Not to worry. It's Koo's last term.
Then you might get Yen Chow.

Yet another rigged system that, as of today, February 5, 2016, just bumped a hefty raise for all council members who are working part time (not for the incoming members next year, mind you), and all approved by Melissa Mark-Viverito, another criminal sociopath who is holding all taxpayers' hostage!

This latest outrage and flagrant abuse of public trust and integrity, despite that a public hearing was held on Wednesday, February 3, 2016, where the speaking public clearly rejected Mark-Viverito's secret, unnamed commission's raise proposal.

Neo-Feudalism, Neo-Fascism and Neo-Bolshevism are all very hard at work in this intensely incompetent mayor's administration, which should have long ago ordered his impeachment, with the rest of his handpicked, friends and family payroll of epic, public service and humanitarian fail!

There is no democracy left in our Republic, fellow languishing citizens---City Hall just devalued all honesty itself---and, the public be eternally damned!

Que Verguenza...
What A Disgrace!!