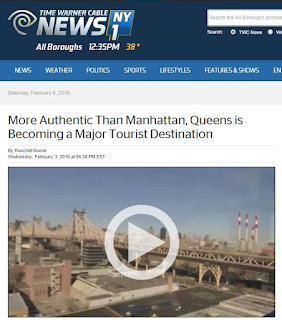 "We get about 20,000 visitors a year here. And 20% or so are international visitors and they come from over 50 countries," said Jennifer Walden Weprin, director of marketing for the museum.

The borough's culture and diversity have become big draws. NYC & Company says more than 12 million people visited Queens in 2014 — with more from foreign countries than the U.S.

The city says tourism is helping to boost the borough’s economy, employing about 50,000 people.
Posted by Queens Crapper at 12:36 PM

There's nothing to see out here. Just a bunch of illegals waiting on the corner for the truck to come by at 6 am. There's nothing interesting to do in queens at all! If I was a tourist, I'd stay in Manhattan and not even bother looking at the other 4 boroughs.

How many of these "tourists" overstayed their visas to become one of our many diverse residents?

So on average, 2.5 Queens tourism job holders serve 1 person a year? I bet Times Square gets more than 20K tourists before lunch on a slow day.

"more than 12 million people visited Queens in 2014 — with more from foreign countries than the U.S." ...I quess flying in to JFK counts as a visit

What is that - one game at Citifield?

I am sure they are not coming out here to see the Cats on the Internet sensation at MOMI or the lets examine the NYC Watershed at the Queens Museum.

And they sure the hell are not walking aimlessly under the Roosevelt Elevated at night with their wheeled luggage in tow looking for that AirBNB above Hoolio's Message.

Just how many tourists do we really see people?

With all the public money poured into the Armstrong House, shouldn't it be drawing in more than 20 thousand?

The Queens Museum recently completed a $90 million renovation. I've been there twice. Once on a weekday and once on a Saturday. There must have been about 20 or so visitors on each day. And I am sure most of them were locals ...not tourists. Not impressed with the museum's layout or programs either. $90 million!!

The public money poured into the Armstrong House helps pay the salaries of do-nothings like Jennifer Walden Weprin. Recognize the last name?

averages out to 64 people per day
(closed on Mondays)

This report is bullshit, Why? Lonely Planet ghost logo on the lower right corner of the screen. This is an advert passing as news. It's going to be hard to take any story they report on seriously now since they are also subservient to the tourism industry in NYC.

it's time to do some digging at the Planet and find out what ties they have in the halls and offices of city council and city hall.

...because people come from all over to shop at Trade Fair...or Key Foods...

Most tourists are white from Europe or other states. Queens has become a cheap tourist hotel spot and they take the 7 train to get into the city. All you have to do is chat with them.

Most of the tourist come for the USTA games in August.

Nothing to see here folks, just keep it moving.

A Weprin family member?
Who the fuck really believes that Queens'....YAWN...."diversity" would ever attract anyone?
How many of these "tourists" are really relatives visiting their U.S. relatives?
There ha go...statistical manipulation...a political card shark's favorite trick.

Although the hype imposed by our electeds in the alleged world's borough, who seem to have become part time tour guides and marketing interns for the lonely planet guide (now there is where they think they deserve 10,000 extra for overtime), it actually is providing a benefit to the borough. Though at the expense of the citizenry who have to live here 24/7/365 with the proliferation of hotels, luxury condos and airbnb and the neglect of mass transit and civic services to pander to outsider frivolous consumerism.

A big example is Rockaway. What used to be the resort of the middle class and working poor every weekend saw a massive influx of newcomers who never gave a shit about it before or maybe never heard of it. And now it's become some sort of hip locale (although it was starting to get hipsters creeping into before Sandy hit, talk about divine intervention, no disrespect people victimized). Even though the boardwalk was not even finished. Although the parts of the boardwalk, in my opinion, seem to be selectively built, to accommodate tourist and hipshit interest. And also there are the tv and movie production studios in LIC like kaufman. But it isn't like it's Malibu or Miami Beach and Universal, Disney or Paramount. Which makes this advert journo piece just fallacious.

NY1 is just another useful idiot for the remaking, remodeling and reconstitution of this boro and the rest of the city.

I was just talking to an 85 year old woman who was praising Theater In The Park.
Without the elderly being bused in , that venue would be practically empty.
As an entertainer, you know youv'e hit rock bottom when you're booed to perform in "Theater in The Dark" in the far end of muggers' park.
Tourism? My ass! Now if a sex tourism junket to Flushing were started, like in Bangkok, you would have tourism.
Other than for a quick fuck, WTF would anyone want to come to Queens for?