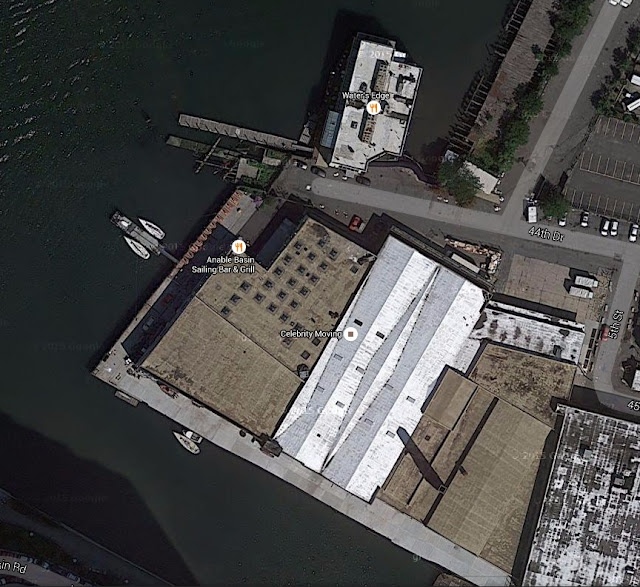 In an effort to spark development along the Queens waterfront, New York City is looking for a developers to build up to 1.2 million square feet of offices, manufacturing space and apartments in Long Island City.

On Thursday morning, the de Blasio administration’s economic development arm will put out to bid two city-owned sites across the inlet from Gantry Plaza State Park.

Right now, they are occupied by a restaurant whose lease expires in 2017 and may or may not be included in the developer's plans, what the request for proposals describes as a "parking lot abutting lands underwater and a dilapidated over-water platform" and a one-story Department of Transportation building that might have to be relocated as part of any project.

The land would also likely have to be rezoned for uses other than manufacturing.

Why do we need to "spark" development along the Queens waterfront? Have they taken a look at what's there now? Why not just put it on the open market?
Posted by Queens Crapper at 7:36 AM

why don't the bastards asked the community what it wants for once, and can the bullshit that anything is fine as long as its development.

I knew this would happen sooner or later. LIC needs goods and services. No more residential development!!!!!!! They don't care what the community wants- why would they? Developers are soulless.

bc the role of the NYCEDC is leverage city owned property for economic development. this is exactly what they are supposed to do. lets attempt to keep these comments a little objective please

Wednesday night the city got hit with winds above 50-70 mph depending where you live.

Even in Hoboken, there is discussion about building a levee to ward off the overflow from the hudson river after this recent storm.

so what the fuck is our supposed climate change conscientious mayor and his overseer predator developers thinking...oh why bother and worry about what's in their warped greedy minds. The bottom line and the free market will always be impervious to such visible and credible threats as long as legacies are fulfilled for our mayor and infinite cash flow for all those involved with the clogging infestation of any square foot of ground or sky.

THEY still don't give a fuck

Economic development is fine but that shouldn't include any more residential. It's not needed. There are crazy amounts of residential already in the pipeline. LIC needs jobs.

Because the community's concern or input is not important.
This is waterfront primo view property (though in a flood plain) to be developed and sold to hipsters whilemega profits are reaped by its developers.
When suddenly in need of a rowboat , during the next hurricane, the hipsters can just call rent-a-row boat for service.
LOL! This is destiny. And there is no stopping it for all of the complaining and posting of comments.
Case closed. Next development site.

LIC NEEDS A MARINA LIKE THE ONE IN BATTERY PARK CITY...

LIC needs a marina?
Just like the one that got flooded in Battery Park.
LOL!
So a few hipsters get washed out to sea. Collateral damage. Who will miss them?
Only the real estate agents.

Go take a look at the topo map in the second New Science floor of Queens college. Seaports in Beechhurst and College Point!?!! Can you find that map online?