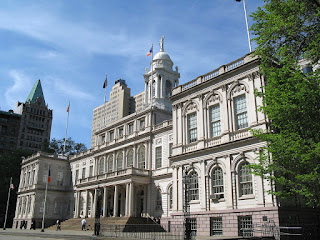 The next ten days are an especially critical period for Mayor Bill de Blasio's housing plan. While negotiations around a new state-level program to incentivize affordable housing production continue and Gov. Andrew Cuomo has promised to soon flesh out general affordable housing plans he announced during his recent State of the State speech, city-level changes being sought by de Blasio are on the move.

On Wednesday morning, the City Planning Commission is expected to vote through two major changes to the city's zoning codes being proposed by de Blasio. These adjustments to city rules for how land can be used are meant to set the stage for what the administration says will be more responsible development than the city has seen in the past, increasing density in neighborhoods across the city through the creation of tens of thousands of units of housing - including market-rate and "affordable" units - and adding community benefits.

Once passed by the Planning Commission, the proposals go to the City Council, which will hold two hearings on them next week.

Mandatory Inclusionary Housing (MIH) and Zoning for Quality and Affordability (ZQA), as the two proposals are known, have been highly scrutinized and received a mixed reaction, including a large dose of negative feedback from many local community boards and praise from some city planners and advocacy groups.

Critics worry about gentrification, landmark preservation, over-development, loss of parking, and whether "affordable" units will be truly so for current residents of neighborhoods that will see major change. Supporters say the administration is taking a measured approach to development, insisting on affordable apartments from developers who benefit from rezonings, protecting tenants from predatory eviction, creating more affordable housing for seniors, and being mindful of community improvement as more housing is created.
Posted by Queens Crapper at 8:43 AM

We are about to be screwed!
REBNY is NYC's sub rosa (not really that sub rosa) government.
So called "affordable housing" is a cloaked sham which will , in the end, benefit them the most and betray the people who really need it.

Let's call this what it really is ZONE BUSTING!
Once done, it will wreak havoc on our neighborhoods.

This move is just a foot In the door. Later on REBNY and their owned politicians will want more .

Since REBNY already owns a majority of out political representives, through their campaign contributions to them....
whore pols, like the Vallone dynasty, will continue to support whatever REBNY wants.

Robert Moses pulled his zone busting feat of magic with the 1961 zoning resolution.
It allowed more dense, abusive development. It ruined neighborhoods throughout NYC.
It took decades to reverse this.

Now a phony liberal mayor, under the guise of doing good, is bending over for REBNY, his major pal.
We will now finally see if community representation, through its community boards or civic associations, have any real power.
Most , so far, do not approve of De Blasio's plans.

In the meantime, keep a careful watch. Become ACTIVE, if you have not been.
Yet remember, NYC is a real esatate industry city. Prepare to take the most painless position you can take,
if "affordable housing" gets rammed home!

Minutes of Community Board #1, Queens

Since our last Board meeting, I attended 2 Borough Board meetings at Borough Hall. On November 16th, we had the Mandatory Inclusionary Housing Text Amendment and the Quality Affordability Text Amendment which was voted on at the Borough President’s Office. Community Board 1 and Community Board 3 were the only 2 Boards that voted in favor of it and I have t say something, I was very proud to represent this board in making a recommendation in favor the extremely well –articulated stipulation the Elizabeth Erion, Gerry Caliendo, John Carusone and the Committee provided. It was an honor and I thank you.

Every neighborhood will eventually be zoned as'GZ', GENTRIFICATION ZONE !!

So will this be passed in the dead of night?

Or just pushed through at the speed of light?

It just sounds so perfect!

The developers get what they want - development.

The mayor gets what he wants - campaign ca$h.

And either way, we will now be bestowed with an UN-measurable amount of "affordable" housing units! That will bring the cost of rent down.
Right?
That is how it is supposed to work.
Right?

And refugees get brand new homes.

Bring in the Syrian refugees...

Lets stay focused people. This will pass because the real culprits are in Queens.

Manhattan and a good portion of Brooklyn are dead set against this.

But here? If you have a community board LAUDING someone like Caliendo as they approve this proposal, what image does this say about Queens?

The fault of all this is ourselves because most of the boro does not have the horsepower to figure out who is really to blame and who we should be stopping. It is one of the reasons that most people in preservation want nothing to do with Queens.

They will make sure that we eat a disproportionate part of the development.

Let me get this straight - Caliendo, who is responsible for those obscene warehouses at Steinway Manson, gets praise from the local community board, of which he is a member?

are those people real?

Do the Vallones still control that board?

what would those dog run hipsters costa and tha boys are pandering to would say if they knew that risi tried to convince the owners of bohemian hall to sell out to developers 20 years ago.

lucky for us the euros had arrived and said are you nuts? if the astoria old guard would have stuck around it would look like old astoria or stienway.

All those years of hard fought down sized zoning shot to hell!

and dizzy lizzy will just do as she's told

It would be most instructive if Crappy tallied the Queens vote on this, and posted something targeted to those communities whose representatives chose career advancement over community.

Sketch a profile of what their communities will look like and list the communities whose representatives (and community boards) betrayed them.

Whatever position CBs take on this , their vote is just a fart in a windstorm, being purely advisory.
It is whatever benefits REBNY the most, that will get passed in the council.
All the civic groups in NYC are nutless when it comes to butting heads with our unofficial governing body...REBNY!
We are going to be getting those awful 1950s housing projects again. Many a nabe will be ruined.

Does YOUR Councilmember support "affordable housing"?
Councilman Vallone, my local chitrool, do you?

All the civic groups in NYC are nutless when it comes to butting heads with our unofficial governing body...REBNY
----
I would not say that at all. You should get on some of those mailings lists for the Manhattan groups. First rate.

And guess where all the crap goes that they fight to keep out of their neighborhood?

To the places that Jerry Caliendo is a hero. They must pee their pants with laughter and delight over that.

A good solid discussion here that everyone interested in strong communities for Queens should read.

Hey Crappy,
Here is a submission you can add to the blog. Staten Island is fed up with crap too. How can this be allowed???