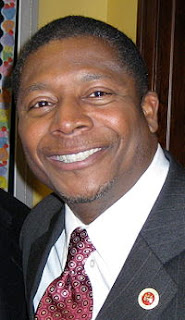 A couple who run a small urban farm said powerful Queens lawmaker James Sanders offered them $1.7 million in taxpayer money to fund their operation — then demanded a $250,000 kickback.

Marion Moses and Malisa Rivera said they refused Sanders, then a city councilman, during a 2012 sit-down. Sanders, now a state senator running for Congress, became irate, and the couple believe their charity has been blacklisted by government officials ever since, they told The Post.

Three weeks ago, Moses filed a civilian crime report with the office of Manhattan US Attorney Preet Bharara. Sources said the feds were already investigating Sanders for steering City Council discretionary funds to other nonprofits.

Mike Duvalle, a former Sanders staffer, told The Post that he met with the FBI last month in connection with that probe.
Posted by Queens Crapper at 6:51 AM

I was looking for info on this 'charity'. Is it a 'farm' or a 'charity'? It sounded like a scam to get government money. Why is the government giving my tax money to charity? I will donate to a charity of MY choice with my money. I don't want these crooked politicians giving away tax money to random groups they can get kickbacks from.

Fortunately they ran into a typical Queens politician: a do nothing until his palm is greased.

Why does the council give money to charities anyway?

STOP SPENDING MONEY. WE ARE BROKE!!!!

Phew, for a second there I was worried that elected representatives from the dirty southeast were starting to get a sense of morality. Thank you Mr. Sanders for keeping the area's sordid tradition of crony political patronage alive and thriving, thus assuring the constituency in the district of being a comparable formidable opponent to the peerless corrupt Meeks.


ON ANOTHER EPISODE OF THE LIFESTYLES OF THE GHETTO FAB CORRUPT SOUTHEAST QUEENS POLITICIANS: SENATOR JAMES SANDERS JR


More shady shit going on with yet another Southeast Queens elected official, this time Senator James Sanders (someone who is already being looked at for other bullshit). This time Sanders attempted to strong arm an urban farming non-profit to the tune of $250,000.

I know the whole “guilty till proven innocent” bit, but let’s face it, when it comes to Southeast Queens politicians, we must just assume they are all corrupt right from the get go. Each one is connected somehow to the other. One leaves office to move into a different position then someone from their office falls right into place, case in point, Leroy Comrie in when Archie Spigner leaves, Donovan Richards in when James Sanders leaves, Alicia Hyndman (the Dem Machine backed) in , when Scarborough goes to jail and on and on and on with the Southeast Queens Political Corrupt Musical Chairs game.

Just the same old bullshit in Southeast Queens, the ghetto of the Worlds “Third World” Borough. Stay tuned for the next episode of THE LIFESTYLES OF THE GHETTO FAB CORRUPT SOUTHEAST QUEENS POLITICIANS.

They ought to be probing the Parkside Group. They were squeezing various not for profit orgs to use their lobbying services in exchange for Parkside (supposedly) being to get them mucho grant money. Start with Flushing Town Hall and Evan Savisky.
We know you sharp FBI folks peep Queens Crap for many a good tip.
Please follow this one and Ned a bunch of crooked fish. C'mon, Preet!

How much money does the pitiful Queens Museum get from our pols?
Isn't it a big tourist Mecca? LOL!

Why are the pols of Western Queens exempt from probes. SE Queens pols should blow the whistle on their gumba buddies out west.

Of course, in Western Queens they don't expect a kickback, but they expect quiet instead. If a campaign donor wants public assets - be it the waterfront, tax subsidies, whatever - and a local complains, then its ignored, funding terminated, what ever.

Why is everyone here being racist?

This is all just a misunderstanding...

They should probe every politician from southerneastern Queens. Once they get elected they become a millionaires within a year

Sanders is your typical crooked lying thuggish jive turkey!
There are quite a few other of his brothers and sisters doing the same.
Maybe you can't blame them. They've been screwed for a few hundred years and now it's their turn to screw back.
In a way, wouldn't you call that justice? LOL!

This public service thug (and voracious thief!), is now my state senator (complements of gerrymandering and systemic, Albany corruption, greed and graft that never ends).

Two years ago, I contacted his office more than five times (and visited the headquarters more than twice), and got the royal runaround (of bullshit and unaccountable bureaucracy, or 'bullshitocracy!'), from an intentionally trained, handpicked, 'friends & family' staff to be as arrogant, dishonest, rude, dismissive, hostile and intensely incompetent as they possibly could (with impunity), and the public be damned!

Maybe the Senate is holding an internal contest to see which publicly elected fool can hold the longest record in dereliction of all public duty! I think we have a winner here!

And, the bigger tragedy here is not only yet another example in grinding 'Taxation Without Representation,' but when publicly elected officials continue to practice 'selective' and 'occasional' representation, then their deprived public constituents naturally resort to quiet desperation that eventually crosses over into vigilantism, social disorder and unrest, and even more heinous crimes of revenge, homicide and full blown anarchy (currently in mid-level progress)!

But, no one in city and state government ever suffer the consequences of their unconscionable depravity, and intentional dereliction of public duty. The savagery, barbarism and false, fake, failed and primitive leadership from within is never ascribed to its rightful blame and punishment (the political SOURCE of all systemic, government fail)---those draconian consequences are always reserved for the victims for whom all help (and taxation without representation) are now a well paid way of life for all New York political scourges of epic, humanitarian fail---where the heavily reinforced mantra from City Hall and Albany are: Delay, Deny---And, Hope That You Die!

And, people already HAVE actually died!

How is this not suspicious even if there was no kickback requested?

Time for the feds to take a really close look at these crooks.

Our own politicos make the Texas politicians look like charity boys.

The savagery, barbarism and false, fake, failed and primitive leadership from within is never ascribed to its rightful blame and punishment (the political SOURCE of all systemic, government fail)---those draconian consequences are always reserved for the victims for whom all help (and taxation without representation) are now a well paid way of life for all New York political scourges of epic, humanitarian fail---where the heavily reinforced mantra from City Hall and Albany are: Delay, Deny---And, Hope That You Die!

Alas. A true pity. And he-Iritano-has such passion that gets buried in unnecessary verbiage such as this.

No, I'm being sarcastic, using 1970's retro lingo.
Learn to read between the lines.

Sustainable gardening is very beneficial, education and health-wise. And if there is anything revelatory about this story is not that another elected from the dirty southeast of queens is a corrupt amateur two-bit hustler that has ties to Shirley Huntley but that these community organizers were able to run a vegetable farm isolated from the virtual gangbanging warzones that surround them in Far Rock. And also they did not sell out and went straight to district court to get him indicted.

Hopefully this honesty will get them a proper donor and maybe, if they don't already, get funds and business from all the artisanal and trendy restaurants that have popped up on the beach, or maybe from a sympathetic vegan celebrity.

This is coming from a devoted red meat eater.

Sarcasm is lost on so many...

Look at the real story. Rockaway Youth Task Force got the bag of dough from Sanders.. It's CE) is a mama's boy who likes to smack women around. Milan Taylor- beat up the other person who started the non profit with him. That happened to be a woman. Nice, right? Milan knows how to do kickbacks.


The other person in the running for the grant was easily knocked out of the box, Robyn Hillman- Harrigan, despite working her ass off making soup after Hurricane Sandy and distributing it for free, when she tried to access a community garden was run off by Sanders. I guess she was too white or something.

There are many angles to this story as illustrated by the above responses. I would like to add a new one---
How stupid do you have to be to engage in this gross corruption when you see state senators, assemblymen and council members being indicted and convicted all around you?
Corrupt pols of the past at least had enough sense to lay low when things got hot around them. Our new breed of political thugs is too stupid to even attempt self preservation. Wow! What morons in the new generation!

Replace him with Al Sharpton. LOL!