Wills a no show council member 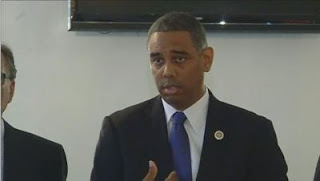 Wills is on medical leave, and that illness is the latest hiccup delaying his corruption trial.

It was nearly two years ago that the Queens Councilman was charged by the state attorney general with grand larceny and filing false business records. He is accused of stealing public tax dollars from a nonprofit group he founded.

"I am not resigning on charges," Wills said in May 2014. "This is America, people. We are presumed innocent before you are proven guilty."

Sounds like he expects to go down. The phrase is "innocent until proven guilty".
Posted by Queens Crapper at 8:18 AM

The longer he is on the City Council the bigger his pension.

He didn't even show up for the reprehensible self-flagellating and appointed monetary raise hearings.

Which only shows how much he wants to avoid going to jail, probably feigning illness like some kid looking to skip school or church. The motherfucker is a goldbricker.

Fucking asshole crook City Councilman makes a million excuses why he does not do his job, why he is brought up on charges, etc, etc. “They are picking on me because I am black”, “This is America, people. We are presumed innocent before you are proven guilty.” (well actually, the phrase is “Innocent Until Proven Guilty”, you idiot.). Now it is some “undisclosed illness”, how convenient. Even if he has 4th stage cancer and has one month to live, he still is a crooked useless asshole elected official who has done shit. And our asshole Mayor just approved clowns like him a 32% raise. YEP, our great Mayor got that in during the long holiday weekend as to not take much notice.

Why is Wills still in office all of this time. He has wasted countless time and tax payers money on his bullshit corruption charges.

The end is coming for Wills, one way or another. RIP.

What's he got?? The Zika virus?? it's probably just the common cold and he needs some time to plan his escape to an island somewhere in the Caribbean that has no extradition treaty with the U.S.

Will he get a bigger pension, or disability pension, if he claims that he was injured in the line of duty? Remember his attempt to get publicity by trying to live as a homeless person a few years ago? It allegedly resulted in pneumonia.