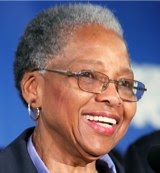 State Assemblywoman Barbara Clark (D-Queens Village), who represented parts of southeast Queens, died at the age of 76 Monday night, a representative from her district office said. The cause of death was not immediately known.

Clark also supported the plaintiff in the Campaign for Fiscal Equity vs. State of New York lawsuit, which resulted in a $5.5 billion increase in funding for city public schools and authored a bill to establish the age of 6 as the statutory age for full-time attendance in school.
Posted by Queens Crapper at 8:42 AM

Just when the raise was due! Too bad.

Condolences to the family and friends of Assembly Member Barbara Clark.

Of course praises are coming in from hacks like Public Advocate Letitia James and Senator Leroy Comrie, both who called her a “mentor”. If this mentor produced hacks like James and Comrie, then that says either much about her mentoring or more about Comerie and James . Remember that Shirley Huntley was a mentor to James Sanders and Ruben Wills. ENOUGH SAID.

Dead or alive, Southeast Queens pols are just hacks in a fucked up corrupted system.

I am sure the hacks are already in line put together by the asshole Democratic machine to fill the position with one of their lackeys.

By the way she was a co-founder of the Community Care Development Project, which got $481,500 in state funding from Clark and a total of nearly $2 million in city and state funding. She allegedly dedicated most of that money to paying salaries for people to perform work similar to services her staffers generally handle.

All though this was pretty much left into limbo, she was still looked at for this. She admitted the charity’s books were in disarray and blamed its former accountant, Jeffrey Richardson of Manhattan. BUT she was the co-founder and as a co-founder it is your job to know all that goes on with a foundation that you fund, sorry no excuses. While she is receiving the typical bullshit praises from her cronies, this is still a stain.

In this day and age of 24/7 news, where what happens today, is forgotten the next day, it is good to bring things like this up.

So Sad...she was a great legislator, friend and woman! May she Rest in Peace!

To the jerk who posted the sarcastic comment about the raise..if you were
half as bright as you are unfeeling you would know it was the City Council Members who received the raise and Barbara Clark was an Assembly Member!

City Council, Assembly, Potato, Potatoe, just another group of lazy layabouts who sit around thinking of ways to spend our tax money and line their pockets. Wouldn't know an honest days work if it ran them over.

Let the next future thief step up and take her place.

According to Joe Moretti it looks like she had her hand in the till as well or at least was ignoring others robbing us blind. I will save my sympathy for those who deserve it.

Don't get nostalgic just because she died. Its unseemly.

“Has this world been so kind to you that you should leave with regret?
There are better things ahead than any we leave behind.” - C.S. Lewis

May she be at peace, additionally, may her family and friends find comfort in her many works...

Out of respect to the deceased, may she rest in peace.
For the ones alive - VOTE THEM OUT!

RIP Barbara Clark. A stellar light, a red giant, in the universe of public servants.

She did her job. Thank you.

Now this is funny