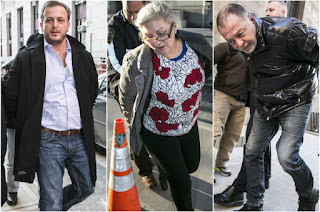 Two building owners and three contractors were arrested Thursday morning on charges including manslaughter​, assault and criminally negligent homicide​ over the East Village blast that destroyed three buildings and killed two people nearly a year ago.

Sharing the blame, officials ​accused, are a penny​-​pinching building landlord, ​her son, ​her contractor, and the contractor’s unlicensed plumber, who installed a tangle of dangerous and illegal gas connections that they hid from Con Ed behind a locked basement door.

And check out this case from Michigan:

Federal officials charged a suburban Detroit restaurant owner and his wife Friday with harboring immigrants who were in the U.S. without legal permission after a fire at a house he owned killed five employees about two weeks earlier.

Roger Tam, 55, was arrested Thursday and appeared Friday in U.S. District Court in Detroit. His wife, Ada Lei, 48, also has been charged, but has not been arrested because she is hospitalized for an undisclosed reason.

Five Mexican nationals lived in the basement of the home owned by Tam in an upper middle-class neighborhood in Novi, northwest of Detroit, while working at Tam's restaurant, Kim's Garden. The Jan. 31 fire has been ruled accidental and possibly caused by smoking; a smoke detector in the basement had been disabled. The basement had stairs to the first floor but windows made of glass block, which would prevent any escape in an emergency.

Illegal conversions and illegal gas hookups kill. It's time to throw the book at these people.
Posted by Queens Crapper at 12:27 AM

Scum. Throw them in the slammer.

It's about time they were locked up. I hope they rot in prison!

I can't think of a better place for these people than the hell they literally created that day.

Really put 'em in tenement building, cuff them to the stairwells, turn on the gas and blammo.

Justice sure grinds slowly.
Let them swallow a hand grenade. That would be real justice!

Why did they take so long to arrest them? This tragedy is unfortunately typical behavior from immigrant property owners who believe that US law does not apply to them. And why should it when they flout all other laws?

Where are the DOB and HPD inspectors? Where are their supervisors? Where there complaints to the City that were never answered? I am curious to find out if there were multiple no access reports from these inspectors.

Immigrant property owners and landlords in all five boroughs proceed in this very same manner -jerry rigging electrical lines, gas lines, refusing to hire licensed professionals as a matter of doing business.They have no concern for tenants, public safety or other property owners. They have disdain for Americans as they think not only are we stupid, naive but that the laws are ridiculous.

There are a lot more parties here that are responsible for these deaths. First the licensed plumber who illegally rented out his license to the unlicensed plumber ( cover up operation), which allowed the gas turn on to be authorized, has only been charged with submitting a false document, not manslaughter or homocide. We can only hope that DOB will at least revoke his license, but I wouldn't count on it. Then there is Con Edison, they found an illegal gas hook up at this property in sept, months before the explosion but never notified the DOB about the illegal work. They simply "inspected" the corrections and turned the gas back on to the restaurant. If they had done what they are required to do (notify DOB) and then broke this contractors balls like they should have this tragedy could have been avoided. It is amazing how the DA's office does not want to indentify or mention Co Ed's culpability here. This is fucking crazy. And now the city council is looking at a stack of new bills to crack down on legitimate licensed plumbers, not the cover up plumbers, but the legitimate plumbers.

I know immigrants who know the law and their rights better than people born and educated here,that's the problem

DILBER KUKIC's license was not renewed (rightfully so) by the NYC DOB. Trombettas' license was revoked.

NOW, the NYC DOI should review all the permits pulled by both individuals ("active" and "closed"). The DOB should be given the authority along with the NYC Fire Department to inspect all permits pulled that involved "gas" plumbing.

Curiously, NO ECB OR DOB VIOLATIONS appear to have been imposed for this FATAL occurrence. ????

It's not just those immigrants you speak of.
Wasn't the famous Carnegie Deli found to have an illegal gas hookup?

Guess who's working at ECB, DOB & HPD? Majority are Caribbean Immigrants. Investigate the entire HPD & DOB. Terminate anyone connected with this tragedy. Give the jobs to Americans. That means people born in NYC.

Because this tragic explosion took place in Manhattan the city took quick action to investigate and prosecute those responsible. If it happened in any other neighborhood in the outer boros it would be a very different outcome.

"Majority are Caribbean Immigrants"
Those jobs at ECB, DOB & HPD are Civil Service jobs that pay shit.
Maybe like our wonderful City Council they need a 30%+ raise to help them perform their jobs better !

These jobs, along with DMV, Meter Maids, etc, are "workfare" jobs. All those people are basically given these government jobs just to keep them off of welfare and out of the homeless shelters, because most are UNEMPLOYABLE in the private sector.

If it happened in any other neighborhood in the outer boros it would be a very different outcome.

Absolutely! In Falasheng they would clear out the rubble and build an even bigger and more illegal building to house half of China!

You guys should look up the requirements to become a licensed plumber before you start insisting on them.

ECB, DOB, HPD, Any city agency job is well paying work. It is a union job with a pension and your salary gets raised every year. You can not get fired from these jobs. After ten years working for the City you get health benefits for life. You get tuition reimbursement, free classes and every known holiday off plus paid vacation and sick days. It is Not workfare. Who made this up? These are decent middle class jobs, come of these city employees are making six figures. The problem is the affirmative action hires who are pushed into managerial positions.

Yes I agree with you,The HPD, DOB inspectors are incompetent hostile Caribbeans who are loyal to their home countries and not the USA. They despise Americans. They do the bare minimum of work thanks to their corrupt unions. Terminate these inspectors who did not cite the problems at this building. Then deport them. Make an example of them.

Reminds me of the 1977 arsons on Main Street, we almost had "Ladies and Gentlemen, not only the Bronx, but the other stadium town, Flushing , is burning, too"