People opposed to corruption in poll 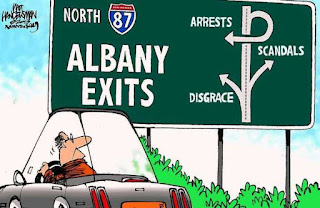 Nearly nine in 10 New Yorkers say corruption in Albany is a serious problem, and 60% believe lawmakers’ jobs should be full time and any outside income banned.

The Siena College poll, released Monday, also found 55% said legislators should not get a bump from their current $79,500 salary even if outside income is outlawed.

And a whopping 84% say lawmakers who are convicted of crimes related to their service should be stripped of their pensions.
Posted by Queens Crapper at 8:08 AM

But will there be any real action taken regarding corruption when the guv, himself, suspended an investigation commission because it came too close to one of his crooked pals? It will wind up to be all show and no blow!

It's worth saying it again: Preeeeeeet---you missed one!

Keep on writing in, all fellow citizens who are fed up and disgusted by all New York State corruption, greed and graft (for whom we all continue to pay a soul crushing price)! Because, the louder that you shout, the more clarity that is delivered to the tone deaf, cradle-to-grave set of useless, corrupt politicians (not public servants), for which the entire Empire State itself is entrenched in the deepest wells of never ending, politically failed leadership---and, getting worse by the hour!

"Because, the louder that you shout, the more clarity that is delivered to the tone deaf, cradle-to-grave set of useless, corrupt politicians (not public servants), for which the entire Empire State itself is entrenched in the deepest wells of never ending, politically failed leadership---and, getting worse by the hour!"

Finally. He came up for air. Had us worried there for awhile.

Do we need to spend $$$ on a poll to determine that the majority of people are against corruption?? Seriously !!

I don't get it. Everyone is so "fed up" but these people keep getting elected by wide margins over and over again.

The only one who can fix this is Trump, but he is quite busy...

Everybody is all for voting everyone else besides their own representatives out of office.

Alas, there is no shortage of compulsive assholes in New York, Skunk & Blight---in particular, Queens County---as evidenced by every pejorative, hostile, off topic, attack that you keep insisting on making against me, as you hide under the safety of online cover, like all cowards and online, loser bullies. So, until you stop hiding behind the Wizard's curtain, I will keep wiping the floor with you, and your sophomoric, impulse control issues that only continues to devalue whatever simple life form that you embody.

We all know what an asshole you are---you don't have to keep reinforcing it---unless, of course you are a masochistic asshole. Then, in that case, fire away!

And you people probably think the cartoon in this ad was an exaggeration!

"It's fun to go into the barn at night and scare the animals." - H.L. Mencken

100% true.
However now we see the Tammany Hall effect nationwide.
Check this out:

"Actual election fraud… Still think you get to choose?

Cruz campaign representatives engage in disinformation campaign. Carson supporters across Iowa were informed by Cruz reps that Carson had suspended his campaign and endorsed Cruz.

Microsoft, Marco Rubio’s biggest donors, counted votes. Rubio finished the caucus in better position than he has ever held throughout his campaign. Microsoft announced that their system wasn’t counting votes properly in many districts.

Hillary won six precincts in a row by coin toss because organizers refused to call for recounts.
Iowa Democratic Party says votes from 90 precincts are unaccounted for.

Still think you get to choose?

Funny how each voter fraud example matches the candidate. Rubio is suppose to be the silicon valley candidate.
Cruz looks like he hired the right scumbags. And Hillary seems like she’s using some old school tactics."

**I don't get it. Everyone is so "fed up" but these people keep getting elected by wide margins over and over again.**

Maybe, just maybe is not the voters, is the vote counters.
Search for Diebold on the Net and see what you come up with.
One famous dictator said, I don't care about the votes, what matters is who is counting the votes.
Seems some politicos are helped big time by the media, no matter what they do!
Now why is that?

We do have the best government money can buy.

Stalin killed about 50 million people in his effort to make communism work.

They also interjected "No DUH". Great investigating again, Daily News. Now go do a poll of firemen who believe fire is bad and zombies who think brains are fortifying.

I just called the # on that billboard and reported DiBozio and his horse carriage bill and the pay raise bill for the council.

I won't hold my breath.

We seem to be much better at all levels than good old Stalin:)

It's weird to think Trump is less dirty and corrupt than his main rivals.

Also, how dumb are Carson voters to believe the Cruz campaign saying he dropped out?

The Founders preferred corruption to dictatorship. It was Mussolini who shut down the Mafia and we who recreated it.

The Founders preferred corruption to dictatorship.

So what do we have today?