He's doing it for his donors 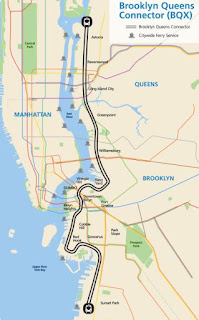 Hundreds of businesses that own land near the proposed Brooklyn-Queens trolley line stand to benefit from the project, but at least 10 have something else in common — they all contributed to a nonprofit promoting Mayor de Blasio’s “progressive” agenda.

The estimated $2.5 billion rail project, which would connect Astoria to Sunset Park and promises to send property values along its route soaring, is being pushed by the Friends of Brooklyn Queens Connector.

Developers such as Two Trees Management, Forest City Ratner and the Durst Organization all have representatives in the group and have either directed money to de Blasio’s re-election campaign or to the Campaign for One New York, which critics have derided as a mayoral slush fund.
Posted by Queens Crapper at 6:55 AM

Of course it's for graft. The whole concept makes no sense-- unless they're doing this to take a loss on purpose. Like the hugely worthless, unused East River Ferries, this will be a 5-dollar fare, and not linked to the MTA metrocard, so no free transfers. Best of luck finding riders.

Let me get this straight, mayor gets elected with the support of donors (big money) who in return get money making projects in return for the support.
Taxpayers getting the shaft and holding the bag with all the debt.

Few make out good though, one gets elected, the rest get to line their pockets.

And not a Dam Thing you can do about it,,to hell with the little people
The King has spoken,as it is said,so shall it be written.

'Tis a pity he's a whore

rephrased from a current song by Bowie.

As much as I hate all those pencil neck geeks in goddamn Brooklyn, this money should go to repairing the canarsie tunnel.

Always some new boondoggle to spend the taxpayer money.

That's a handout to the unions and his buddies.

Preet or the next US Attorney will be seeing a lot of this clown in the years to come. He may end up a 'guest of the state', with a vacation in the 'house with many doors' in the future.

What will Chirlane, Crazy and Fuzzy do then? Hopefully Rachel will take them in. I hear she has an open bedroom! LOL

LOL!
What a "great" idea!
What else is tax payers' money good for?

Do I get a deduction for contributing to wealthy real estate developers's projects?
NO!
Do I get a dividend check instead of writing one?
NO,
Of course not!

Using taxpayer dollars to help fund real estate development has been going on since the 18th century with the founding of the United States of America.
In NYC, it most probably , goes back to the Dutch in New Amsterdam.

Once we accept the principle that REBNY runs New York, and that all politicians are subject to their plans, we can learn to swallow the real truth. As tiny New York City molecules, we are pretty much powerless.

There is only ONE TIME we have some power...in the voting place...if you can find a candidate who is not on a major REBNY dole.

Am I a cynic? Maybe.
I'd like to think that I'm just realistic.

Wake up and do some careful research before you vote.
De Blasio, for example claims to be a peoples' champion (having been the public advocate). In fact he is a two faced liar.
Mayor Bill plans to gentrify ALL of Brooklyn by driving out people from their formerly AFFORDABLE residences.
So, in fact, he is ANTI AFFORDABLE housing!

Now, multiply Mayor "D". By your local crooked politicians who are also owned by REBNY!

We can only all do our best. Vote your local bums OUT,

Bill's meds aren't working so well lately.
He will be more likely seeing a Bellvue doc soon than Preet or a prison cell.
Look at his tired shop worn face and listen to his dull medicated speeding voice.
Der Mayor is poised for a break down.
His mental illness is congenital. It runs in the family.

A surprising intelligent discussion coming out of Astoria on waterfront development - touches on the trolley line.

That trolley line is going in, no matter what clatter arises from the masses.
The developers want it. And big six foot plus Bill is ready to bend way over to suck all of their dicks.
Uh, maybe they'll accommodate him and stand on chairs so Bill won't strain his back.

I gues the communist mayor is more equal than his constituents.

A trolley line in a flood zone?
Hipsters won't mind as long as their coke suppliers keep them happy.
NYC the la la land of the east.
Big Bill will be indicted before he ever sees any blue
prints for a bogus trolley line.