Boats will be needed more than streetcars 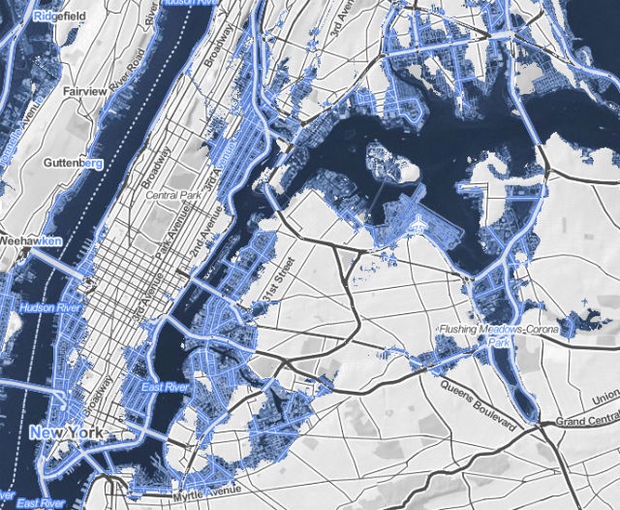 While New Yorkers worry about the ways in which residential and commercial developments, and streetcars, will affect the city's waterfront in the short term, they have rising sea levels to obsess about over the next few decades.

Oceans around the globe will rise as much as 4.3 feet by 2100, at a rate faster than they have in the past 2,800 years, according to two different studies published Monday in the journal Proceedings of the National Academy of Sciences. The researchers attribute the increase in sea levels to rising temperatures driven by the burning of fossil fuels, which most scientist agree emits heat-trapping gases.

One study, led by Rutgers earth and planetary sciences professor Robert Kopp, estimated that sea levels will rise 22 to 52 inches by 2100 if they continue at their current rate. A second study, overseen by the Potsdam Institute for Climate Impact Research in Germany, arrived at a similar conclusion: sea levels will climb three to four feet. (Until the world industrialized in the 1880s, oceans rose no more than 1 to 1.5 inches a century, and they would cycle between rising and falling.)

Those estimates aren't quite as extreme as one published last summer by Science Magazine, which examined the impact that 2 degrees of global warming would have on coastlines worldwide. The planet's warming was predicted to raise sea levels by at least 20 feet as early as 2200. Its effect on New York City shores can be seen in a map below, map built by the group Climate Control.
Posted by Queens Crapper at 7:05 AM

So does that mean that waterfront living hipsters' dreams of living in paradise won't hold water?
Just ignore the "illusion" of hurricane Sandy and enjoy the view. Global warming does not really exist.

And when the planet cyclically turns chilly in a couple of years the hipsters won't need streetcars. They'll just exit their ticky-tacky high rises and stroll across the frozen East River to Manhattan.

Developers could market the area as a Venetian-like setting, complete with gondolas.

If we are to believe that modern human activity is causing the ice caps and glaciers to melt at an unnaturally accelerated rate now then we must ask what caused the 2 mile high ice cap that covered Manhattan island and most of the northern states to melt approximately 11,000 years ago. I do not think there were any evil American capitalists burning fossil fuels in their cars, homes or factories back then.
So what caused the melting then and why is it our activity that is allegedly causing it now?

The media did a scary thing in self censorship by suppressing the flooding along the East River during Sandy. The water went up to the Astoria Houses front door, into the Sohmer lobby, as well as the Penna Power Plant lobby, the Waterfront Crab House (would you make a guess if the wood soaked decor could ever be decontaminated?) , and the lobbies of several buildings in Hunters Point. Especially poignant was the sheet rock from the nursery schools ripped out after getting soaked by the sewage laden water. To ally parent fears, Jimmy No Brainer like a Pied-Piper led the children's Halloween Parade the next day.

If I were parents, I would check the health of their kids as well as others in your building and community if I lived on the waterfront. The East River, under the tender mercies of Queens politics for a century which has always looked the other way when it came to following rule$ and regulation$, has become one of the most polluted brown fields anywhere. The carcinogens in the soil is matched only the the fecal content of the water.

Cheap building construction, careless zoning, a few more floods, coupled with Queens being one of the best governed areas this side of Pyongyang, will make the hipsters welcome worn out before long. The first extended 3rd world family moving into an apartment, the first Verve homeless shelter, and the area will empty of quality people faster than you can say 'Bed-Sty in the 50s'

Bad investment people. Think of your kids health. Now look at the political and real estate shills. Is this a risk you want to take? How lucky do those people make you feel?

That Carbon footprint thingy again ?
Bring in more hipsters and 3rd world ers and tell them
DRINK MORE WATER,YOUR LIFE DEPENDS ON IT !!

So if cemeteries go under water does that mean you were buried at sea ?

The toxic sewage was there yesterday, is there today, and will be there tomorrow.

The water table was always just inches below ground as it was once a marsh filled in with God only knows what the 19th century thought was 'good' landfill.

But the killer will be the endless stream of poor decisions that will make tomorrow's bust.

YES this was said here on this web-sight FOR YEARS

Reading the article would impress the readers who choose to live in denial would blow this off thinking "I'll be dead by then, so it's no biggie. Now I am going to wait on line for a rainbow bagel". And most certainly, " That's not going to stop us from developing a 1000 ft. tower for our cunning investors and those stupid hipster demo money." and " The demand of affordable housing is much too great to pass along to the next electeds."

But these prognostications are manifesting now. I can think of various incidents this year. The bulkheads collapsing at Newton creek, the flash floods in towns by Jamaica Bay from Atlantic Beach to the Rockaways and even in Broad Channel and Howard Beach. And for crying out loud, wasn't Sandy convincing enough 5 fucking years ago?

And this collective of lobotomized braniacs consisting of oblivious city planners, borough chamber of commerce heads, hedge fund vultures, predatory developers,and Mayor Big Slow De Faustio with his fiendish wormtongue deputy mayors and his non-elected in-house special needs cabal of advisers will not let this report or even the voices and presence of the citizens deter them from making their "Campaign for One New york" an ugly reality (note the caps).

Here we go with the Global Warming crowd again.
Fix the overcrowded unsafe streets and hoods you 2 bit jerks and stop scaring people with this nonsense.
The weather is constantly changing is spite of what Al Gore and his mentor Maurice Strong (inventor of global warming) are saying and is perfectly normal.
Tying this fake science to human behavior that in turn can be taxed which is what they want is CRIMINAL!

It's not nice to fool Mother Nature.

"Here we go with the Global Warming crowd again."

Maybe you should know, that the people that are responsible for all this current irresponsible utopian planning and development and the hipshits who reside and indulge in them are people who supposedly subscribe to global warming and climate change facts or theories if you prefer.

More BS from the usual suspects. Wasn't the world supposed to have ended already? It's shocking how people just accept this crap.

Oops, I should have not mentioned global warming, even though I meant it in jest.
Now we have to listen to miles of counter arguments when that is not the main point of the posting.
This is still a flood plain location.

Global warming has nothing to do with raising your kid on a superfund site that the likes of Crowley (who moved his kids to VA) or Van Bramer (who has no kids) think is fine.

Cancer is no picnic and that is what you are exposing your kids to - for not thinking or accepting every piece of bullshit people tell you.

The waterfront should be a passive park with a monthly time limit for participants. Yea, people, its that bad.

I remember being in the Phelps-Dodge site when a cloudburst forced us to seek shelter in its ruins. The water coursed through the building with the color of anti-freeze.

Disagree with the issue of LIC/Western Queens flooding?

Go argue with the government. THEY published those maps.

Now go over to the "Pinnacle Group" and let them sell you the Steinway 'park' next to a sewage plant and power plant with brown fields and rats.

What are your elected's doing while distracting you with this junk science?

"This is still a flood plain location."

Exactly. It's like this proposal was presented by either Neptune or Aquaman. Or maybe that broad who appeared before King Arthur.

This plan could make sense if one day dolphins and sharks will learn to walk up-right.

I am not responsible for any counter evolution arguments.

I should have been more specific:

Maurice Strong invented the Global Warming SCAM which is tied to human activity which in turn can be taxed.
Has nothing to do with mother nature.

Still, it's so nice to see LaGuardia underwater and unusable. God, what a dream.

"What are your elected's doing while distracting you with this junk science?"

You really want to know?

My 60 year old house is worth almost a cool million of course with matching taxes.
FEDERAL INVESTIGATION NOW to these ripoff scams with ever increasing taxes and "average home value in your neighborhood is..." counting all the ILLEGAL CONVERSION HOMES and ILLEGAL MCMANSIONS when assessing home values.

There is a 98% consensus rate amongst Ph.D. level scientists that our current warming trend is real and man-made.

Oh if only there was some alternative source that takes the complicated issue and dissects it for idiots like me to make an educated choice.

cheers and kudos to previous anon with clarification.

Ten years ago AlGore said the entire city would be under water now...

Global warmimng = scam intended to extract even more money from your wallet. Only Kool-Aid drinkers believe it.

Stop wasting time with arguing over how many angels can dance on the head of a pin.

The place HAS flooded, the web is filled with photos of areas getting downed by raising seas. The area is a toxic brownfield with fecal and polluted water.

As for the advocates for building, when you move you and your kids into those towers let us know. I would like to hear ONE person that said, knowing the risks, they would do so.

Until you know, just shut the f*k up.

(sarc), how dare you refer to the past comments of the Climate Change Gestapo.

I can't believe how many people still believe the climate alarmists' lies. Sad.

Tide comes in tide goes out