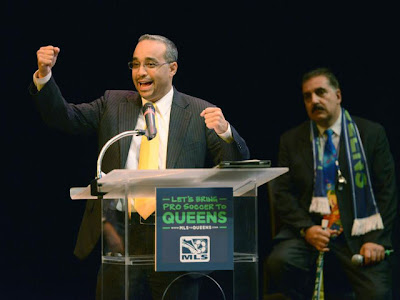 Backing the building of a new Major League Soccer stadium in Flushing Meadows-Corona Park, State Assemblyman Francisco Moya predicted the addition would be successful for a very specific reason — the soccer-mad population.

He said the area has a lot of Hispanic residents, and Hispanic cultures treat soccer "like a religion."

"We live and breathe the sport," Moya said recently. "It becomes a sense of pride for the team and the city, and that's exactly how it would be for Major League Soccer and Queens. That whole surrounding area is just a soccer community."

This has become the prevailing wisdom: Because of the cultural impact of the sport in Spanish-speaking countries, Corona's largely Hispanic, immigrant population will overwhelmingly support a new stadium if it is built in the nearby park.

But the stadium's opponents are disputing this narrative. The truth, they say, is more nuanced.

"This is the storyline they want: 'Latinos want soccer, and [protesters] don't want to give it to them.' That's a false argument," said Will Sweeney of the Jackson Heights Green Alliance, one of the groups opposed to park development.

Exactly. Since MLS and the pols who they bought support them can't justify the alienation of yet more parkland for private business, they have to create the illusion of racial animosity. This is an old trick from the Book of Tweeding. See previously: Ridgewood Reservoir.
Posted by Queens Crapper at 12:26 AM

Unless the tickets will be priced at $10-$20, (which they won't be) I don't see any recently arrived "Hispanic" immigrants spending mucho pesos to attend a match.

This is just a smokescreen to steal more public land.

isn't that State Senator Peralta in the picture?

Oh I see this as a great marketing opportunity to business to get entire blocks of tickets to promote this.

But the big thing is how the ethnic infatuated politicians use the ethnic card to tweed and play us off against each other.

The other is the lack of civic culture in Queens to stop this. Prospect Park and Central Park of their advocacy groups.

We have QCC that thinks the Mayor and Vallones are great, have sessions of political ass kissing, and are very much in to .....

tree pruning of NE Queens and little else.

This is Queens. As long as you keep the streets clear of snow to visit the kids and shop in Nassau no one will complain about anything.

I wager that most of the resistance comes from Citifield (remember John Rocker :

"Imagine having to take the 7 Train to the ballpark looking like you're riding through Beirut next to some kid with purple hair, next to some queer with AIDS, right next to some dude who just got out of jail for the fourth time, right next to some 20-year-old mom with four kids. It's depressing... The biggest thing I don't like about New York are the foreigners....")

Now that is baseball - a blue collar sport.

The Tennis people must be climbing walls over this. What will happen to all those gorgeous USTA fans in from Kansas in their scrubbed whites riding the 7 or sharing the park with 20,000 Central Americans?

How many Hispanic families in corona just cant wait to pay $45 a ticket for nose-bleed seats and $14 for a Danny Meyer cheeseburger?

Typical political tactic; If you oppose the soccer stadium, you hate hispanics.

Maybe it's because of the Fox Soccer Channel, but when I think about soccer fans, I hink about loads of crazy British fans.

Madre de Dios!
You think those suburban Connecticut soccer moms would dare to venture into Corona?

This whole thing is a jerk-off, I tell you!

Here's an interesting story on this from Capital New York:

Use Citifield,the Mets should be defunct in a few years;or maybe Yanqui Stadium............

Bring back the Roman circus to Citi Field!
There's an attraction that tourists would flock to see.

Have any opinions on my suggestion, Terri Osborne?

Then reserve several blocks in downtown Flushing for sex tourism, like Bangkok.

Seems like there are a lot of happy endings in Queens!

And how much of this "Hispanic" community are legal immigrants paying taxes to support this stadium? hhhhmmmmmm?

Build this at Belmont race track - move the park population there too!

That "population" is already there in nearby Elmont!