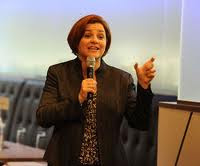 City Council Speaker Christine Quinn announced a fleet of education proposals this morning, including extending the school day and axing textbooks and using tablets instead.

Quinn targeted the education system with her speech at the New School.

The Speaker is battling to be the next mayor, facing an ever-growing list of competitors to replace Mayor Michael Bloomberg when he finishes his term next year.

Her proposals, which she vowed would cost less than $300 million, included appointing a deputy mayor for education and children.

She also wants to make the school day longer, keeping students until 6 p.m. five days a week in schools with the highest percentage of students qualifying for free or reduced-price lunch.

No more textbooks would be needed under her plan – instead, students would use tablets.

I'm sure tablets cost much less than books. And are we also providing free dinner to the children since they'll be there until 6pm? How about another round of school buses?
Posted by Queens Crapper at 12:13 AM

What will they be doing on these tablets? The schools would then need to purchase the downloads of the digital textbooks and workbooks.

So they get rid of what they already might have in order to buy the digital downloads.

" won't cost more than $300 million" who is supposed to believe that?

Let's have them over for dinner and do their homework and tuck the kiddies in bed for the parents. Ugh - save us from Quinny!

Leave it to a childless dyke,
to think she knows what's "best" for kids and parents.

Aren't schools supposed to be for educating the young, so that they can climb up the socioeconomic ladder?

Quinn wants future voters to be as dumb as a post...
child care and minimal education. And who will pay for this? You know who...us taxpayers!

These kids will be too busy when they grow up, holding menial non-skilled jobs, (if there are any).
They'll have no time for making smart political decisions after a long hard day's work.

They'll be wind up becoming great voting fodder for the Democrats!

The reason we have public education is to guarantee an "informed citizenry". The success of our Republic...Democracy...depends on it!

Welcome to the Democratic party Dictatorship of NYC!

Korean churches are really day care and after-school programs. So why not other churches?

Educate 'em, feed 'em, baby-sit 'em, send 'em home to watch TV and sleep then start it up all over again.
The schools are already open during the summer to feed and entertain the kids. When will Quinn demand that schools be open 24/7?
Unfortunately the It Takes A Village crowd is winning because of lazy parents.
And BTW, the kids grades keep getting lower and lower.
The dumbing down of society brought to you by the liberal leftist dems.

Im in no way a supporter of Ms. Quinn, BUT she has a few good points.
1. KIDS SHOULD BE IN SCHOOL LONGER THEN THEY ARE NOW. not so sure about 6pm, but I would say till 5. Take out all the BS, they're not learning for all that much.
2. Textbooks SUCK. Although harder and costlier to implement in the NYCBOD, MANY MANY MANY smaller ed depts are doing this, and realizing so many other benefits.

Books or tablets, what is the difference when they can't even read?

All this for $300 million? The devil is in the details:

Tablets: what model? If its a Nook or , then its feasible. The City can save by picking and updating material more frequently and circumvent Texas influence on education material. Kids will have a library at their fingertips. The challenge is how the City will disburse, maintain and account for these tablets. On the flip side, obese kids could use the exercise from hauling around books.

School till 6PM: It depends on what they'll be doing until 6PM. If Quinn wants to reschedule the school day with recess/mass phys ed periods interspersed, then it might work. Giving teachers time to grade papers during recess is a way to offset increased hrs at school. If they limit this to kids with free/reduce price lunch (low performing schools) This might reduce ADD/ADHD as kids have time to burn off energy.

Both my parents worked and I qualified for free lunch. Most kids on reduced/free lunch have parent who work.

See? THAT's why Quinn is wrong for NYC. She is in too deep with Bloomberg & friends.

I will definitely not teach in such schools. I am not the slave of other people children.

Better not buy iPads. Crime will skyrocket. At least then you can blame Apple for it.

Who is on the hook when the iPad is lost or destroyed? Sure as hell won't be the parents.

And the curriculum software for the tablets will skyrocket in price as the textbook industry sees their orders shrink.

Putting aside the fuzzy math being done to justify spending the books budget on tablets, we are forgetting that our city is going to be facing a massive budgetary crisis soon. There may not even be a big budget for books anymore.

Who would be doing this tax-payer funded babysitting? Teachers sure won't. If they are going to be required to stay even a minute longer than their current schedules all hell will break loose. Mulgrew and the UFT will go nuclear. Who's going to be paying the salaries and employee benefits to the new hires?

Why not. I am working in PS24 and they are doing it now. Tax payer funded daycare. Marvelous.... NOT! Why can't people take care of their kids anymore! So sad....

Ever see a horde of these little savages getting on a train at dismissal?? My favorite is the nice quiet ride on a Flushing bound 7 interrupted at 33/Rawson, where hundreds of school kids suddenly storm the train and run and scream like animals. Do you REALLY want to keep them in school until 6PM and turn them loose on work weary rush hour commuters in already packed rush hour trains??

Why have kids if you're looking to the Dept of Ed to raise them? This woman is completely clueless!

FYI
Regarding "I-phones" and "I-pads":

The "bros" even have a term for stealing these.
It's called "Apple picking".

Quinn is courting the "ghetto vote".

Don't we already have after school programs? And extracurricular clubs and teams? Maybe these existing programs should be provided with more resources instead of a mandatory extended school day. J

Just because you go to a school with a high percentage of poorer students doesn't mean you need more academic attention. It's unfair for those kids who are already meeting standards and have parental support behind them. I used to be one of them.

public school until 6:00PM.....it is just four more hours a day to more completely indoctrinate the skulls of mush with liberal/progressive doctrine.

Excuse me,
do you know any other words besides,
"liberal/progressive"?

Go and crank some other agenda, fella.
You're beginning to bore us with your petty rants.

Duh speaker thinks she a regular stand up comic.

does it still cost $50-75 per public pupil(roundtrip) per day ,for the taxpayer ?

the city council school transportation office must have the total cost for busing MOST of the 1.1. MILLION N.Y.C. public school pupils.

but ,will they make it public ?

when most could walk to their local building free of cost to the taxpayer.

what is in your wallet? after the new property tax increase goes into effect. you pay for these union bus workers and their benefits,(driver /matron).