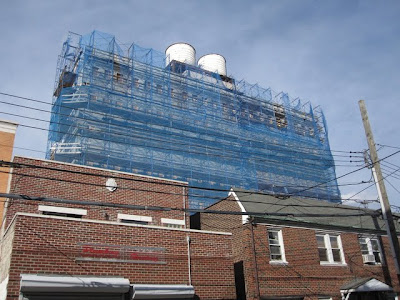 A group of Astoria neighbors says the construction of a massive eight-story medical facility in the neighborhood is putting their buildings on life support and might endanger residents' health.

The 53,993-square foot building at 23-25 31st St. abuts the backyards of several houses on 32nd Street, and a portion of it was mistakenly built 10 feet closer to the properties than zoning regulations allow, according to city records.

For the last several years, residents on 32nd Street have fought against the project, saying construction errors have caused damage to the foundations of their homes, which they say shifted and cracked.

Neighbors say their latest trial is the discovery that the developer, Pali Realty, has confirmed plans to install mechanical equipment — including exhaust vents for a 134-car parking garage — in the space directly behind their backyard patios and gardens.

According to the developer, the building was mistakenly built according to outdated zoning.

The developers are now applying for a special city permit to legalize the rear yard and continue construction of the site, with their application set to be reviewed by the Board of Standards and Appeals in the coming months.

So what does Vallone have to say about this?
Posted by Queens Crapper at 6:37 AM

There is no way that these developers deserve a variance or any other special consideration. Our motto should be: build it wrong and it comes down. Our politicians should be made to see to that.

If these developers don't comply with the building code; zoning regulations and other laws, they should be made to take these illegal buildings down. Pronto.

Until we make an example of a developer such as this, one that can't obey the rules, this will continue.

Our politicians should be made to cough up the monies out of their funds or create a fund to fight these notorious individuals.

Most of us cannot afford to take on developers like these. The Huangs have gotten away with this "crap" for too long. And, our politicians have condone it.

No doubt the owners of the adjacent properties have been harmed physically, mentally and monetarily by these culprits.

Until you have been there, you have no idea how difficult it must be to deal with something like this.

This is total nonsense and it is unbelievable that our politicians condone this behavior. If the politicians don't do the right thing, we should move to remove them from office.

These homeowners should take the Developer to court with the intent of forcing him to buy their properties at a tidy sum.

The owners should take the developer, the surveyor (who did the foundation stake-out), and the Department of Buildings to court. I'll bet that mechanical equipment is not a permitted obstruction; the BSA will allow it, though - after all, that's what they do! The BSA is merely a vehicle for allowing anyone with enough money (costs in the area of $10,000, and up, to bring a case) to do whatever the hell they want.

In tracking stories about property lines and zoning for 30 years, I have never read of an error where the developer mistakenly built 10 feet further in than zoning regulations allow.

Funny how the errors always seem favorable to the developer, isn't it?

The owners should take the developer, the surveyor (who did the foundation stake-out), and the Department of Buildings to court...

NO THEY SHOULD EXPECT THEIR COUNCILMAN TO DO SO AND IF NOT SUE HIM. HE APPOINTED THAT BOARD.

THE GAZETTE IS ALREADY RUNNING ADS FOR THIS PLACE.

WARNING TO QUEENS WHERE EVER THE VALLONES ARE RUNNING: THIS IS YOUR FUTURE.

Have the developer pay damages to to the home owners equivalent to the value of their homes. The city should fine the developer 25% of that value - hit developers where it hurts.

The Vallones are already running to Whitestone and are working hard to do for that community what they have done for Astoria.

There is another new building under construction at 136-68 Roosevelt Ave. in Flushing has exactly the same problem. Seems the people in the DOB are still allowing this kind of crap keep going and going.