Has Bloomberg dropped the education ball? 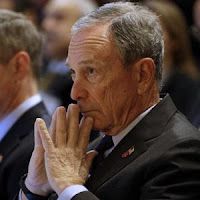 Remember the time Mike Bloomberg jetted off to sunny Bermuda as a monster snowstorm bore down on the five boroughs? Never again, he said afterward, woefully, while the city ever-so-slowly dug itself out of the drifts.

For there he was last week, down in Maryland giving America a firearms intervention while the United Federation of Teachers and his own crack Department of Education negotiators pulled his pants down on teacher-quality reform.

Transforming the city’s public-school system into a national model for quality and effectiveness was once right at the top of Mayor Mike’s personal legacy list.

But then came the third-term blahs, the departure of Joel Klein as schools chancellor, the ensuing Cathy Black debacle, the ascendancy of the thuggish United Federation of Teachers boss Mike Mulgrew — and the now-pervasive sense that Bloomberg no longer much gives a damn about the city’s 1,400 schools.

Fact is, he’s always been long on big ideas and short on follow-through (congestion pricing, anyone?). The schools seem to be no different.
Posted by Queens Crapper at 6:49 AM

In an interview with the Atlantic, Bloomberg said:

"In medicine, or in science, you go down a path and it turns out to be a dead end, you really made a contribution, because we know we don’t have to go down that path again. In the press, they call it failure. And so people are unwilling to innovate, unwilling to take risks in government …"

And so you have essentially an concession form the man himself to what many people have long said about what motivates Bloomberg with regards to education and the city at large. He looks upon NYC as a kind of laboratory for his experiments, admitted to be risky, with the people as subjects. He paints himself as a kind of James Bond villain: hyper-wealthy, bored, and out to satisfy some perverse curiosity.

In medicine and science, there is something called "IRB." Look it up, Bloomberg.

Public education in NYC is run for the sake of the unions and the politicians, which is why the graduates are illiterate.

The bottom like is the Mayor doesn't want educated people around.
Stupid people are easy to manipulate have and low end jobs (if any) they rely on all the "free stuff" and protection the democrats hand out.

Queens has the voters to prove all 3 of the above.
That's what I see anyway, take a walk down Myrtle or Grand ave and have a good look and listen at the majority populate.
---bring an air sickness bag

santa can give the best earner's taxes to the minority population, (now the voting majority), but he can not force them to read, write, and do math.

no NYC mayor in 70 years has accomplished this feat.

He's still trying to run from that testing bubble fiasco (talk about cooked books) and lashing out against the lower paid cogs in the system- be they teachers or bus drivers and matrons gives him a chance to let his chosen ones, the moneyed such as publishers, contractors,consultants ,the metastasizing testing cartel and corrupt bus company owners not only off the hookin terms of blame, but also in on the same profits he skims through the kickbacks channeled into his multitudinous offshore shell corporations as the quid pro quo for contracts let.The trail is obscured, but this will not last forever.Maker this thieving rat bastard's remaining time in this city and particularly in this borough as thoroughly unpleasant as possible, and keep pushing for investigation. There are olks out there wose silence is not bought in perpetuity.

Bumbling Bloomberg
is good at pitching all kinds of pet projects of his--
but he's dropped just about every ball he's tried to throw us, on the pitcher's mound.

It doesn't seem the educational system did anything for you, going by the way that you post things here.

Even if the mayor was shown how to save $300 million a year with the city unions neither he nor anyone else in New York would care.

Teaching children can never be a success without serious parental involvement. It seems to be all the rage today to blame teachers and unions. I taught HS school math for 30 years in the NYC public schools. I went into education after serving in Nam. I found that the children who showed up prepared and ready to learn passed, the rest didn't. Low quality parents produce low quality children. As far as the UFT/AFT well just look at the test scores in the non-union states, they too are horrific. There is no doubt that there are inept teachers, we find that in all professions. Yes the unions protect them too and that's an untenable situation. In my last year of teaching I had 17 students in my pre-calc class. On parent teacher night 6 parents showed up! The rest were AWOL. Long live Queens Crapper! Long live my amazing NYC teacher's pension! Death to Gaza & the Palestinians!

As long as we don't hold all the people involved accountable it won't get better.

It starts with the parents. The kids don't magically materialize out of thin air ready to learn at the start of Kindergarten. Only 20-25% of a kid's awake hours are spent in school. Are the parents on top of things at home? Do they have their act together themselves?

We have the issue with teacher quality and experience. The thought behind Teach for America is great, and all involved have good intentions. However, the current teacher training system leaves the new teachers' performance are on average underwhelming. 5 years in they hit their stride. Unfortunately, most leave right then when they become good to great teachers. New teachers take their place. It becomes a revolving door of inexperienced teachers coming in and good teachers leaving. The DOE does not have a system to capture and disseminate best practices and experiences among the teachers (especially those from retiring and exiting individuals) and administrators/managers. Then there is the issue with teacher evaluations.

We also have the problem of corrupt, wasteful, and outdated practices. We waste billions on overpriced school construction, services and supplies every year. Case in point the school bus contracts.