You can get there from here, but it'll take a while 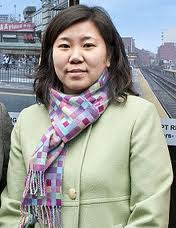 "I think we can sometimes see how interested members of Congress are by judging how accessible they make their district offices.

Congresswoman Grace Meng has opened her district office in Bayside at 218-14 Northern Boulevard. That's six blocks from the eastern edge of the district. It's also an hour and fifteen by perfectly functioning public transportation from Juniper Valley Park (in the district). It's 3 1/2 miles from the nearest subway station (Flushing Main St) and 4 1/2 from 179th Street on the F Line. It's only a half mile from Bayside on the LIRR. There were plenty more centralized options closer to the subway she could have picked, considering the district includes 16 subway stops.

Even Joe Crowley found a way to be more accessible to constituents in both Queens and the Bronx." - anonymous

This was probably done in homage to Gary Ackerman. This is where his office was.
Posted by Queens Crapper at 12:39 AM

Got friends by Queens Blvd. They are way away from her post.

Crowley at least got an office near my place in Queens. Now what can he do about transport funding for better transit to LGA, Queens Blvd subway CBTC, or that proposed Triboro Rx.

Grace Meng has been out to lunch while she was an Assembly member...UNLESS you were a Chinese constituent.

This inscrutable member of Congress cares about nothing but Asian issues (particularly Taiwanese).

As I understand it, they moved into this office as a convenience and are looking for other sites where they can locate an office. Why don't you call her office and speak with a representative?

The late Congressman Jim Scheuer"s office was right next to the Quaker Meeting House: near Main Street and Northern.

"As I understand it, they moved into this office as a convenience and are looking for other sites where they can locate an office. Why don't you call her office and speak with a representative?"

Why doesn't her office communicate with her constituents? Why don't they put out a press release to say where they are looking for space? Why is the public expected to do her work for her?

"As I understand it, they moved into this office as a convenience and are looking for other sites where they can locate an office. Why don't you call her office and speak with a representative?"

She could tell her constituents this on her site, or she could have taken proactive actions.

She could have taken over Bob Turner's office (also out of convenience), as a different temporary space that is more centrally located in the district.

Or she could have done her office shopping while she was a Congresswoman-elect / candidate. It's not like the real estate market wouldn't have been heads over heels to show her or her staff a place. Plenty of other freshman members managed to use the two months between election and inauguration to find a permanent location.

The lease is not up. She could move but we would have to pay for another office and an empty one.
Lets see if she moves after the lease is up.

Interesting. How do you know when the lease is uip?

We get to vote again in 2 years.

anon 4: you're kidding right? guess you don't know what you're dealing with here. no research, just rant!

"The lease is not up. She could move but we would have to pay for another office and an empty one.
Lets see if she moves after the lease is up."

Are you telling me Ackerman made an illegal lease?

Termination date – A lease cannot extend beyond the current Congress. Therefore, the ending date must be on or before January 2 of each concluding Congress.

too busy kissing hillarys toosh at the benghazi hearings

She told the Daily News she was looking for new office space closer to the center of the district three weeks ago.

If she doesn't have a more convenient office later this year, I'll eat crow, but maybe give her a chance to get in office first.

Well this should serve as no surprise to us since we are unfortunate enough to be Mengs' constituents.

Oh wait, Im not asian so that means Meng doesnt count me as being one of her constituents despite the fact I live in "her" district. Ditto for any hispanics in her district because she certainly proved how much she hates them with her out of control diva hissy fit at boston market. I guess she wanted to be closer to her home in eastern long island since she doesnt live where she is registered to vote.

For shame, but atleast her name was further sullied when her mob boss daddy was collared by the feds.

SHAME ON YOU MENG!YOU UGLY DUMPLING! Your A Conniving,Corrupt,Corpulent,Chinese Congresswoman who will end up behind bars just like your daddy,Liu, and his daddy.Cant wait till the federales LOCK YOU UP!!!

It matters little where Meng has her office.

The door will be closed to you,
unless you are offering her majesty a gift.

Wrap it up nice and conceal it in a fruit basket.
That's the way daddy Jimmy received his $80,000.

FYI:
Members of the Old Quaker Meeting House, in Flushing (a National Historic Landmark that is equal in status to the Statue of Liberty)...had tried to contact Assembly Member Meng...regarding illegal encroachment upon their historic graveyard by a developer.

We've heard that she never got back to them.

In addition, we believe that Congressman Ackerman required the Quakers to write to him about the same situation, before he would speak to anyone.

Cross your fingers in hope for prompt service!
Pray for any kind of service.

Not a good start Grace.

Why is she looking for office space elsewhere if the lease isn't up? Shouldn't she say how long she'll be in Bayside?

Who is in Weiner's old office? That would be central.

Here are her press releases. Show me the one about her office opening, it's location, and the plan to seek space elsewhere.

"Why is she looking for office space elsewhere if the lease isn't up? Shouldn't she say how long she'll be in Bayside?"

The lease is up, unless two illegal actions were done and approved by the House of Representatives in Washington.

First, Ackerman would have had to secure a lease that lasted beyond his Congressional term. Members lease until the end of the present term and cannot get a lease approved beyond that. Once re-elected or they become member-elect they can start the process of renewing the lease for up to two more years.

Second, even if they take a lease beyond that period, it's the member who takes the lease and not the district. The lease would have been Gary Ackerman's and the House pays for it until he no longer is a sitting member.

Legally speaking, the only reason she has that as her district office is because she wants it to be her district office. She could very likely have taken Bob Turner's office as a temporary space that better serves her constituents.

Or she could have had her office shopping done while she was campaigning/member-elect and had a new office ready in two months. The day after the election is the first day she could have sent a contract to the House for approval.

I live within a 4 minute walk to her office, but I know she doesn't represent me. It's Koreatown around here so I guess she's comfortable in these surroundings dominated by her preferred constituency. It's also right by the 111th precinct.

It's the voters who belong in jail for electing Meng.
In a way they will be. Isn't Meng their warden now?

But, being Chinese, Grace will always be willing to accept a bribe in exchange for better treatment.

That's the way the system runs
in the family's old homeland, of Taiwan.