Concern over housing for "vulnerable" 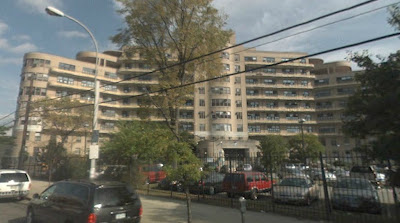 Some civic members are concerned about plans to turn a Queens Hospital Center building into a residence for people with low incomes and chronic conditions, saying they have been told it would house people with mental disabilities and HIV/AIDS.

“There’s a lot of questions about safety,” said Kevin Forrestal, a member of Community Board 8.

Queens Hospital Center recently made a presentation to CB 8 about the project, Forrestal said. Board members are worried because the residence, which would be at the vacant “T Building” on the Queens Hospital Campus, is close to two schools, he said.

The T Building, on Parsons Boulevard between 82nd Drive and Goethals Avenue, is across the street from St. Nicholas of Tolentine Elementary School and around the corner from Queens Gateway to Health Sciences High School.

Though the building would have round-the-clock front desk coverage and security cameras both inside and outside the building, Forrestal said he was not as worried about security on the home’s grounds as he was about what might go on out in the general community.

The plan for the residence, which is still in the preliminary stages, envisions the T Building as 251 units of permanent housing. It would be operated by Comunilife, a city-based nonprofit that provides health and housing services to low-income and vulnerable individuals.

Didn't the former St. Joseph's Hospital down the street become something similar?
Posted by Queens Crapper at 12:06 AM

Just dump it all there...
Jamaica is one of the shit nabes of the borough.

You wouldn't see this happening
in the Whitestone-Malba-Beechurst area.

A crazy use. Why not sell the structure to Queens College or St John's University for Dorms - a need both nearby schools need badly?

who will be lucky enough to live here? registered sex offenders who qualify as depressed since they can't live anywhere else. other convicted felons who will pay off the management company, then sublet the apartment to large illegal immigrant families. There might be 1 or 2 white persons for window dressing . the majority will be black Dominicans, functioning illiterates with hearing problems from being put in jail because they get arrested for all the criminal ways they make money. oh, poor victims. why do you insist they speak English? you bastards!

the security guards will be uneducated black males who can barely speak English from Nigeria & the Caribbean who aid drug dealers in selling crack in the building. Said security guards will have an attitude and chip on their shoulder because the white man expects them to work for money and they have now lost their food stamps and medicaid. how will they pay their child support for the jack pot babies they turn out?

Wow you are quite the educated individual. Clearly sex offenders will not be eligible for housing because of the proximity of the schools. The proposal offers priority housing to former in-patient and out-patient consumers from Queens and Elmhurst Hospital. Since you possess limited knowledge of the mental health field chronic illnesses include schizophrenia, schizoaffective disorder, bipolar disorder, etc. These individuals did not choose to become mentally ill nor was it in their power to prevent it. The fact is that a lot of these individual are lower functioning or their illness impedes their ability to maintain a full-time job. A lot of times they are disowned by their families because of their inability to manage their disorder and stigmatized by individuals like you so they refrain from getting the psychiatric services they need. These individuals already live close by and attend day programs at the hospital thus they are already in the neighborhood everyday. And just for your information out of 20 patients on a unit more than 50% are Caucasian males. Just because people immigrate from Nigeria and the Caribbean doesn't mean they are uneducated they just have to work much harder than you to get where they want to be. Regardless, this is a wonderful opportunity for individuals with chronic illness if it is orchestrated in a organized and caring fashion. It would be ideal if there was on site physician, psychologist, mental health counselor, social worker or other mental health professionals. At the present moment, Building T is not suitable for housing because of the severe deterioration, hopefully this proposal will be considered so people with mental illness don't have to be discharged from the hospital to homeless shelters. I hope in the future you would educate yourself before dishing out such harsh and unsubstantiated claims.

This building is an Art Deco Marvel of Queens, it really needs to be made into a building where people with some class would WANT to live utilizing an 80/20 for those that don't have such high income.
NO NEED for mentally unfit to live here, this is a great neighborhood teetering on average and this "throw THOSE FOLKS over there" attitude would be a complete detriment to the schools, families and overall cohesiveness of this diverse nabe.