Any Italian will do? 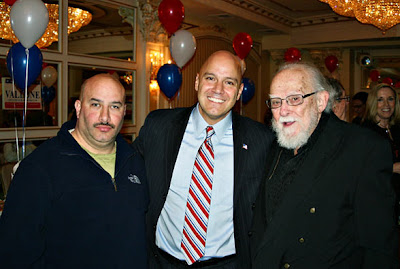 Paul Vallone kicked off his campaign for the City Council seat based in Bayside and Whitestone Tuesday night at Verdi’s of Whitestone.

Vallone is running for the seat currently occupied by Councilman Dan Halloran (R-Whitestone).

“There is really a lot that can be done, primarily for making schools better and safer,” Vallone said, adding that he would like to also tackle quality-of-life issues and overdevelopment in northeast Queens.

More than 200 people attended the event, according to Vallone’s staff, and guests included several members of Community Board 7, on which he serves.

The Council hopeful raked in about $25,000, although he hopes to have about $35,000 total in his coffers by the filing deadline Jan. 15, according to his staff.

Vallone thinks that the area is in need of a change.

“We are going to have to energize the community,” he said. “Dan has been there for four years, but I think we can get someone better.”

Vallone ran for the same seat in 2008, but lost in the Democratic primary. Kevin Kim beat out the rest of the field, but then went on to lose to Halloran in the general election.

According to Vallone’s brother, Councilman Peter Vallone Jr. (D-Astoria), Kim won because there were two Italian Americans in the race.

In addition to Paul Vallone, CB 11 Chairman Jerry Iannece also ran in that race. Each garnered about 2,000 votes, according to Peter Vallone, which if combined would have won the primary.

“The reason why an Italian American wasn’t elected four years ago is because there were two in the race,” Peter Vallone said. “It’s that simple.”

1) The Vallones would have you believe that Iannece and Paulie V. had a "gentlemen's agreement" that Jerry would not run for City Council when, in fact, Jerry and his base were drawn out of CD19.

2) According to Pete, jr.: “The reason why an Italian American wasn’t elected four years ago is because there were two in the race. It’s that simple.” So, his brother won't necessarily win because he is the best candidate, but because he has a vowel at the end of his name. It's not smart to take a certain ethnic vote for granted.

3) He would like to "tackle quality-of-life issues and overdevelopment in northeast Queens." Well then I suppose he should hire a new campaign manager and deny being a lobbyist for developers again.
Posted by Queens Crapper at 12:51 AM

If that's the case I can think two Italian Americans who are in the district that would do a much better job than both Dan and Paul combined.

Just to name a few off the top of my head

I would go with Al first. Better name recognition and no ties to any political group nor special interests.

Driscoll has been telling the little guy where all the bodies are buried.

Has candidate Paul Vallone suddenly found his "true calling" at the 11th hour? Praise be!

Now, as he's running for office, he's discovered that he must tackle (at least give lip service at fundraisers) to the quality-of-life issues and OVER DEVELOPMENT problems facing northeast Queens.

Where has he stood on these most important issues in the past?

Has he been playing the roll of "The Invisible Man"
hiding out in the burbs?
Not exactly . He's been most active!

The Vallone law firm has represented a score of real estate developers. They've served as lobbyists for that industry. Don't believe me. Look up their record.

Let's take just one example.
Paul recently approved of OVERDEVELOPMENT in Whitestone (the White House Restaurant's over-expansion plans). The community was AGAINST it! Yet, as a member of community board 7, he voted in favor of the measure.

I, along with many others, aren't sure they can fully trust Paul Vallone to deliver, on his campaign promises (not that I'm thrilled with Dan Halloran's past performance). There's another rogue for you.

I'm voting VERY CAREFULLY, because the record of the Vallone family, regarding Astoria-LIC, has been abysmal.

Astoria is a mess of mish-mosh, haphazard over building.It's been OVER OVERDEVELOPED with an infrastructure that can't support it.

I fear that Paul will promise us voters the world, gift wrapped with ribbons, but deliver the ills of Astoria-LIC to northeast Queens.

As the signpost reads,
"Proceed with caution, slippery road up ahead".

Voter beware! Do your research and shop wisely!

Here we go again...
another remake of "The Italian Job"...
or should I say hand job?

What ties to "special interests" does Graziano have besides the ties to his community, and CARING enough to ACTUALLY ACCOMPLISH something to improve it?

He's been at the forefront of most of the down zoning measures, that have already gone into effect throughout Queens.

You're talking through your ass, fella!

You'd better consider wearing a hat...to remind you which end you're supposed to be wiping.

How fitting...Verdi's...where the elite meet to eat!

So who is it that's talking out their ass and may need a hat?

Why can't a independent run and win ?
Grassroots efforts have to start somewhere.

I've seen it posted on this site several times in the past with people advocating Al Centola a a write in candidate. Can that really be done in Queens?

Crappy, do you know the answer?

Why not someone from this blog ?
A independent Queens Crap Party.
The QCP party line.
Might need a different name but let's discuss it.

Ass hat...
you CLEARLY more than infer that Graziano is tied to special interests.

Would you like some more toilet paper to wipe with?

P.S.
Learning to read what's between the lines is very important too. BTW,what hat size RU?
I'd like to make a donation to your wardrobe.

After seeing what the Vallones and their appointees on the community board form hell have done to Astoria, and how that community looks after a beaten down public gets apathetic with this 'leadership' the rest of Queens really needs to take a look a the shills for the Vallones and start to ask THEM as to THEIR agenda.

At least "chrome dome"
doesn't wear a sleazy toupee like his daddy Pete does.
Bravo...walk proud!

By "guests" from CB#7
do you mean they attended for free, sans donation?

Were there drinks on the cuff for Gene Kelty?
As if he needed more.

Did Marilyn Bitterman attend...with her hubby Jack in tow?
I've seen Jack Bitterman load up his plate, piled higher than Mt. Everest, making at least 3 trips to the buffet table at other events.

Then we've got "follow the buck" Chuck Apelian.
Did he get a free lunch, or was he promised another Vallone printing contract for donating to the cause?

Yowza, yowza, yowza!
What a day! What a collection of characters!

Paul's only " special interet " is the community I know this. We love him in Bayside and appreciate all he's done and does. I was being sarcastic about the Avella connection didn't mean to hit a nerve.

Go Goomba whoever you are ....

The short list of Italian Americans who should run is accurate, with Alfredo Centola leading the list. However Mr. Centola has not entered with either party and the only way you will get him to serve as elected councilman is to WRITE HIM IN.

The short list of Italian Americans who should run is accurate, with Alfredo Centola leading the list. However Mr. Centola has not entered with either party and the only way you will get him to serve as elected councilman is to WRITE HIM IN.

Ok so lets not just talk about it lets get it done and send these others who are just puppets PACKING!

Based on what I've read about Mr. Centola and what he's written

He has mine and my wife's vote.

The candidate with the deepest pockets and the best pulling operation will win.That's the way it goes.

Al's a great guy...
but Centola hasn't the chance of a snow ball in Hell.

Avella has a very good chance to win,
if votes aren't thrown away on guys like Centola.

Then you could wind up with a vampire like Vallone,
sucking the borough dry.

All this useless talk about throwing away votes! Unless New Yorkers wean themselves off of the garbage that party politics dumps on us every election your just going to get the same results in your neighborhoods. Write in citizens like Centola and you will see positive results.

al centola. won't run. but we need him.

so enough with all this talk lets all just write him in already. maybe we should open up a al centola super pac. then we can finance him. something needs to be done. he is the best talent out there. we need him.

The candidate with the deepest pockets and the best pulling operation will win.That's the way it goes.

Al's a great guy...
but Centola hasn't the chance of a snow ball in Hell.

Avella has a very good chance to win,
if votes aren't thrown away on guys like Centola.

Then you could wind up with a vampire like Vallone,
sucking the borough dry.

I think you're get it mixed up...if Centola (or Graziano) were running for something, it would be for City Council against Paul Vallone.

Avella is running for Borough President against his brother, Peter Vallone.

I would definitely support a Centola/Avella or Graziano/Avella ticket over Vallone/Vallone - no votes thrown away in that race!!

And no! It won't be a wasted vote. Either it will send a message? Or enough of us will do it and he wins

I am going to go on vista and.get a dozen lawn signs or so printed up and give them out to my neighbors. Their cheap enough.

HEY what about Adam Lombardi he's ITALIAN and lives in the district.

Lombardi? Wouldn't that be like voting for a smaller version of Vallone ? Leave Adam the Vallone minion where he is.

The only "write in" that counts, is your signature on a donation check to a candidate that is ELECTABLE!

There are a lot of "well meaners" around.
Few have a chance against the big guys!