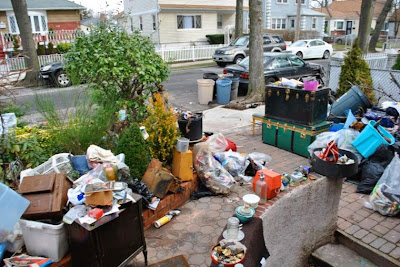 The property at 243-14 132 Road is littered with seemingly worthless items including broken furniture, buckets, pieces of wood, old cosmetics, tools and more.

“They use a U-Haul all the time, and they dump the stuff right on the lawn, and in the middle of the street, and then, I guess, they return the truck,” said neighbor H. Gardner, who asked that her first name not be published because she is embarrassed by the conditions next door. “With the U-Haul and all this garbage, that means they have to drag it up, past my driveway, so I had to get a rake and clean the debris because I need to pull my car out and I’m not sure if there’s nails and stuff.”

The property is an eyesore that neighbors say they are tired of looking at, especially when all the other homes on the street are rubbish-free with finely manicured lawns. They claim the property has always looked that way, ever since homeowner Elaine Ranger moved in about 10 years ago.

When the Chronicle first reported on the house back in April, Ranger and her daughter, who would not give her name, said they were in the process of spring cleaning and maintained that most of the items on the property were useful and the rest was just awaiting pickup by the Department of Sanitation.

Last Thursday, another woman who also claimed to be Ranger’s daughter but would not give her name, said the clutter was scattered about because she had recently emptied a storage unit and needed time to photograph the items as evidence in a pending lawsuit.

“I am not saying it’s excusable, but that’s the reason why it’s here,” she said. But she later noted, “I collect stuff. Things come in and out.”

Ranger faces eight alleged Environmental Control Board violations for construction work without a permit and quality-of-life infractions with fines totaling $6,900, and two Department of Buildings construction violations, just as she had in April, when the Chronicle first reported the story.

The city Department of Health issued a violation to Ranger in 2011 for improper storage of items and harborage conditions conducive to rats, a spokesman for the agency said back in April. The DOH and the Department of Sanitation did not respond to emails requesting information about any new violations.

Click on the DOB link provided. This one is a real doozy...
Posted by Queens Crapper at 12:37 AM

Whatever you do,do not throw gasoline onto those items.

That's where Gary Ackerman
is hiding his Taiwanese payoff gold.
Nobody would ever think of looking there.

Where does Michael Nussbaum hide his
undeclared cash?

Send them back to Creedmore. That's why we got Obamacare.

Look at all that flammable crap and PVC laying around that can light up like a Saturn booster.
Where is the fire Marshall ?

There have been so many calls regarding this property over the years. And it typically takes the DOB three months to get off their asses and attempt to inspect. So by the time they respond, either the violations have ceased (aka the work has been done) or the owner does not allow access.

In any case, why hasn't the Sanitation Dept. gotten involved here? Don't they issue tickets all the time for improper garbage disposal? And if the items are visible from the street, complaints can be made to DSNY as well.

Obsessive compulsive Obamacare ranter...
you could benefit from a little outpatient care yourself at "Creedmore".

They offer a sliding scale of payment.

And please find another tune to play.
You boring us with your repetitive "repertoire".

I'm all stressed from all stupid questions clients ask.