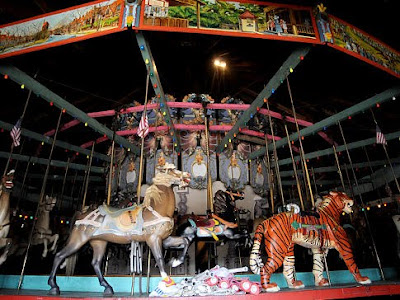 The Forest Park Carousel, which reopened last year after three years out of service, may be spinning into a long future.

Now, the Landmarks Preservation Commission is eyeing the attraction for a potential landmark designation.

“We’re actively considering it as a potential landmark and are working closely with the Parks Department on a timeline for a public hearing,” said Lisi de Bourbon, the spokeswoman for the LPC.

The confirmation from the agency comes after a representative of Councilwoman Elizabeth Crowley (D-Middle Village) told Community Board 9 that the LPC said a landmark designation for the carousel was not on its agenda.

That Liz Crowley is a very effective representative, isn't she? Just so full of accurate information...among other things.
Posted by Queens Crapper at 12:31 AM

That's an easy one. LPC will designate it.
It doesn't stand in the way of any development projects.

The deserving Billy Rose Aquacade Theater in Flushing Meadows Corona Park was in the way of future development, so it's long gone thanks to Claire Shulman!

Borough hall has raped Queens for too damn long.
Vote for Avella for borough president or get stuck with Vallone or Katz.

Don "junior" Pietro will be far worse than Manes or Shulman ever was concerning historic preservation.

Pete and Melinda are real estate lobbyists!
Katz just left the lobbying firm of Traurig & Greenberg to run for beep.

That priceless Muller carousel belongs in a museum and a replica put in its place.

Landmark status cannot protect it from any abuse, vandalism, or fire that might occur in the future.

This is an irreplaceable work of art!
Will there be 24 hour guard service to protect it?

Is the Mona Lisa left at risk in a public park?

Liz Crowley is simply the greatest lawmaker since Hammurabi.

You know it, you just hate to admit.

Do any of our Queens dumb asses even know about Hammurabi's Code?

Hey lay off of Crowley. She heard about Hammurabi and his code and sent him some Kleenex.