It has to be seen to be believed 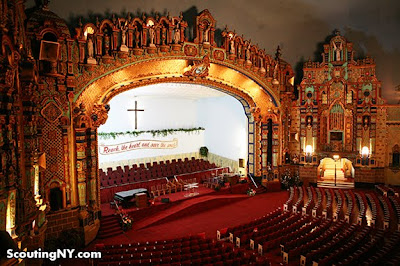 Click photo for story.
Posted by Queens Crapper at 4:55 PM

Lord have mercy...I'm going back to church.

This is truly one of the gems of Jamaica, if not the crown jewel. When I first moved to Jamaica back in November of 2011, I noticed the outside of this gorgeous theatre and told myself I had to go inside. One Sunday morning, while church services were going on, I walked in and asked if I could take a look around and the man sitting at a table said sure, I even when into the the main show room where the service was going on. It was such an amazing experience and I am sure most people in Jamaica, hell most people in New York, have no idea this is here. They actually do tours. Out of all the New York Wonder Loews, this is the only one that is still intact. They have restored the one in New Jersey and they are going to restore the one in Brooklyn. Luckily the church did no changes to it, except for the huge chandelier in the center of the ceiling and they painted it, but it is completely intact. Simply beautiful. Jamaica does so many things wrong, but this, they got right by not destroying this magnificent theatre. Luckily the church took it over as opposed to some low class immigrant developer who would have turned into some huge 99 Cent store or some shitty looking mosque.

Too bad it is surround by shitloads of garbage and shitty looking cheap ass stores.

Thanks much for sharing this amazing piece of history.

I had always heard that the church (Tabernacle of Prayer) had preserved the interior, but I had no idea just how well they had preserved - if not restored - it. Absolutely stunning.

It is what the RKO Keith's used to be back in the day.

If a mostly black church can rescue the Valencia, isn't there an Asian church large enough that can save RKO Keith's? If we must play identity politics, let's put it to the good cause of preservation.

This is nothing short of a miracle. I was skeptical clicking on the link, thinking it might be a story about a church that ruined the theatre with shoddy renovations. I stand corrected. The church leaders and the congregation of the Tabernacle of Prayer need to be held up as an example to one and all about true civic pride and a commitment to our cultural history. It probably isn't cheap or easy to maintain the condition of the theatre, and other organizations or businesses could have decided not to bother.

Now I have something to else to put on my to-visit list! Love it.

It's amazing to see what a motivated private owner can do. Can I hear an "AMEN"?

this post's photos brought back memories of this magnificent theatre.

great job by the church group.

the last movie we saw starred a local gal beauty contest winner from Jamaica, on this stage, Barbara Nichols.

i think the Loews theatre at 96 street/Broadway, Manhattan was similar to the Valencia

When I look at those picttres and I think about hoe the Keith and the Triboro ended up, I want to bitch slap Huang and piss on Donald Manes' grave.

It is absolutely WONDERFUL, glorious and magnificent! It takes your breath away.

Attend services there, and see for yourself.
The congregation is most welcoming to visitors.

I first entered the church in 1987.
It looked just as wonderful back then, as it does today (give or take a few color scheme changes).

FYI:
Only the exterior of the former "'Valencia" theater
has NYC landmark status.

Therefore, BRAVO to the "Tabernacle" church for preserving it's interior, though they weren't required to do so. They are proud of their treasure.
It is truly inspirational.

Note:
Under the law, the sanctuary (interior) of any religious institution, cannot be landmarked.

That would be an intrusion of government into religion.

The Committee to Save The Keith's, had been in touch with the "Tabernacle" about 25 years ago,
to offer preservation advice, etc.

Today it still remains Jamaica's wonder, unlike the Flushing Keiths in its current condition.

You can "thank" Queens' Shul-Manes administration for what happened in Flushing! It was boro hall that bombed the Keith's!

Tommy Huang was simply their bombardier.

If we only had a borough cheer leader like Marty Markowitz for our borough president, instead of the greedy, mediocre, crooks that run Queens.

The restored Loew's Kings Theater (in progress) will be Marty's legacy to Brooklyn. What will "granny" Shulman's be?

Phantom of The Keith's said...

You are forgetting Donald Manes' partner in crime, Claire Shulman.

That Devil's duo was responsible for the Keith's destruction!

I'll be there (Lord willing) to piss on Shulman's grave when she shuffles off her mortal coil!

I believe that the Loew's Corporation donated the "Valencia" to the "Tabernacle" church in the early 1970s.

There is no chance that an Asian church would take on the Keith's in Flushing.

The cost of detoxifying the Keith's would be costly,
even before stabilization and rehabilitation can begin.

The Keith's, as a theater, has dropped its final curtain.

All that can be hoped for at this time, is that the landmark ticket lobby and grand foyer, be incorporated in a worthy project.

Even that doesn't seem likely to happen for a few more years, given our economic slump.

#1. Flip the property to an overseas corporation.
#2. Find investment partners (good luck on that).
#3. Sell it outright (the asking price better be cheap).

If it sits there rotting for 5 more years, it might even wind up being de-landmarked and razed!

There is a hardship clause in the NYC landmarks law
permitting this.

And who will prevent it...
CB#7, boro hall, the mayor?
Start praying now and keep it up!

Amen!
That's as close to church as the Keith's will ever be.

Not really - I'd say that most Chinese follow traditional customs and worship deities that have little if anything to do with Buddhism - some of the deities were ancient Chinese warriors.

However, there is a proliferation of Korean churches, so there's more of a chance of getting a Korean group involved. But as has been noted by other posters, it would be an enormous financial undertaking to take over and maintain the Keith's property. You'd have a better chance of it becoming "The Donald J. Trump Pavilion at the RKO Keith's Theater."

Please...the Koreans are leaving Flushing.
They're being forced out by the Chinese.

Most Korean churches are smaller affairs.

So how come the Chinese Buddhist Association is so prominent in Flushing, if a lot of Chinese aren't Buddhists?

The remaining Korean enclave along Union Street will be gone, if Flushing Commons ever gets built on Muni Parking Lot #1.

Repeat:
You can't have a landmark church.

Ask Michael Nussbaum what's up with the Keith's.

He has "represented" the current owner Patrick Thompson at CB#7, and Queens borough hall.

The news media has noted that Thompson is way behind in his tax payments and is probably scrambling not to lose the building.

How about creating,
The John & Joseph Liu Center For The Performing Arts
in the Keith's?


The Keith's will continue to rot,
until what remains is eventually demolished.

My money would be on moving the landmark lobby to another location....maybe somewhere near the
Museum of The Moving Image.

Floo-shing no longer deserves it.

The Flushing Keith's is the second sacrificial lamb....as in architect, Thomas Lamb's....theater to go in Queens.

Donald Manes saw to it that that Lamb's Triboro Theater on Steinway Street in Astoria, was demolished in the mid 1970s.

He and Claire Shulman (his accomplice) did the same to screw up the Keith's.

Wasn't it the "Jayran" wrecking company that first undertook the demolition job at the Triboro Theater
in 1974?

Borough hall has a long history of hostility toward historic preservation in Queens.

It will get even worse under the real estate developers' favorite candidates for borough president, Melinda Katz and Peter Vallone Jr.

He's our only safeguard against neighborhood intrusion and destruction!