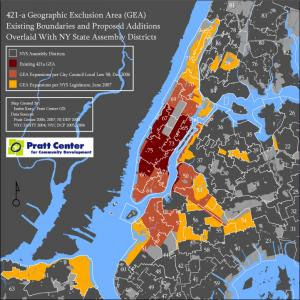 Another group is grumbling about the city's flawed property-tax system -- big-time real-estate developers with close ties to Mayor Bloomberg.

The immediate issue on the table is a request from the Real Estate Board of New York, which represents the city's largest landlords, to add a tax cap when the city asks Albany to renew the 421a program for rental buildings.

The program, which expired last year, grants a 20-year tax abatement if a developer agrees to set aside 20 percent of new units as "affordable," meaning for tenants with limited incomes.

Developers are howling that the city has increased assessments so aggressively in recent years that a third of the revenue of some rental buildings is now going to taxes.

They want taxes capped at 20 percent, warning that otherwise those 421a buildings will convert to condos, and 10,000 subsidized units will be lost.
Posted by Queens Crapper at 7:50 AM

I was told that Christine Quinn dismissed 3/4 billion dollars of DOB and environmental control board finds combined giving developers, contractors, landlords, amnesty. Quinn is trying to smooth Rudin family purchase of St. Vincents and they donated big time to her - see her councilpedia page. Cathie Black while at Hearst brokered big real estate deal sale to Mort Zuckerman, and Mike sold the air rights...Bloomberg Quinn Burden serve developers not the people and belong in jail.

THE LAND OF TAXES
Tax his land, Tax his bed; Tax the table at which he's fed.
Tax his tractor, Tax his mule; teach him Taxes are the rule.
Tax his work, Tax his pay -- he works for peanuts anyway!
Tax his cow, Tax his goat, Tax his pants, and Tax his coat.
Tax his ties, Tax his shirt; Tax his work, Tax his dirt.
Tax his tobacco, Tax his drink; Tax him if he tries to think.
Tax his cigars, Tax his beers, if he blubbers, Tax his tears.
Tax his car, Tax his gas; there’s many ways to Tax his ass!
Tax all he has, then let him know you won't give up till he’s outta dough.
Tax his coffin, Tax his grave; Tax the sod in which he's laid.
Then put these words upon his tomb, “Taxes drove me to my doom...”
And when he's gone, do not relax -- it’s time to apply the inheritance tax!

Next time a politician threatened to close your hospital / senior center ' kid's school / fire house ask them to cut EDC and City Planning.

See what they say and if you are not satisfied, write a letter to your paper and Crappy.

Increased assesments? Not for the owners of the Whitestone Jewels property, They got a 70% reduction.

Too bad, in fact elimination of tax abatements especially for those developers that put a foundation in the ground 3 years ago to beat the clock to earn a tax abatement when the structure is build should have the clock run out.

"Next time a politician threatened to close your hospital / senior center ' kid's school / fire house ask them to cut EDC and City Planning."

The city would fall into a pit of darkness and chaos if the EDC and Planning depts were cut, and king bloomie would drop dead on the spot since his buddies would not have a city agency to support their corrupt activities.