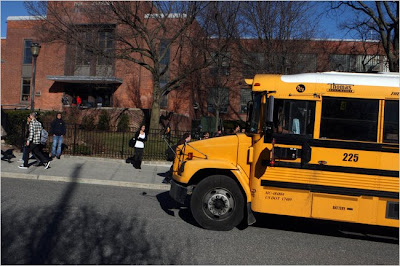 Facing the threat of layoffs and program cuts, financially ailing districts across New York State are re-examining expenditures and increasingly challenging those mandated by state laws and regulations they find burdensome, costly or unnecessary.

By their count, these officials say, they are forced to abide by more than 250 unfunded state mandates a year, many of which can no longer be sustained.

School officials have been complaining about these imposed costs for years, but their protests are now resonating with parents and voters seeking ways to cut school spending. In response, Gov. Andrew M. Cuomo convened a statewide mandate-relief committee, and the Board of Regents has identified laws it considers outdated.

But the clamor for mandate relief has been heightened by the March 31 adoption of a $132.5 billion state budget, one of the leanest in years. The budget reduces education aid by nearly $1.3 billion.

As a result, superintendents and school board members who once focused on big-ticket expenses like pensions and health care are now analyzing smaller mandates, like a 2007 law requiring districts to give employees paid leave for breast cancer and prostate screenings. The mandate cost one district, Croton-Harmon in Westchester County, $3,500 for substitutes for 20 teachers and staff members, and the cost is expected to rise as more staff members learn about the law, district officials say.

Just think how much NYC paid for this stupidity. Paid leave for cancer screenings? Can't you get screened on your days off? During summer break? Why is this the school district's responsibility?
Posted by Queens Crapper at 12:26 AM

is this all the waste there is in the NYS education system?

the savings reduces even more when the rest of the state's districts are included.