The Queens Machine, in about 200 words 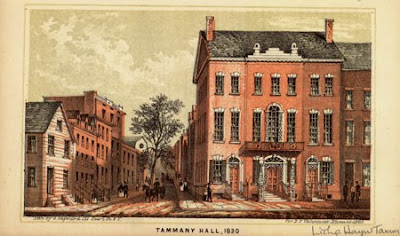 "The Democratic Machine in Queens is liberal in name, conservative in substance.

They pander to gays, minorities, seniors without the spirit of openness and certainly without a trace of the traditional 'good government' that was the providence of liberals.

Hence the gap between their outward pious and inward souls that has spawned the word 'to tweed' - placing it right up there with that other term that Crappy has on his front page describing urban clubhouse politics - 'honest graft.'

They are in politics to make money, to disenfranchise opposition, to marginalize dissenting opinion, to alienate the voting public, to pass offices off on their relatives and the well-connected, to develop communities to maximize the wealth and power of a small group of cohorts, while those that are supposed to benefit from open liberal government - the immigrants, seniors, youth and others - have to deal with broken and overwhelmed services, eroding workplace conditions and hollowed out unions, substandard overpriced housing - and a government increasingly out of touch and self serving and undemocratic - in short, all those things that traditional liberal-reforming-good government Democrats fought against.

Where's Jesus when you need him? Whipping these thieving sons of bitches for once and for all out of our lives?

Bravo! The article is the best description of the modern American political system I have read to date-the Gettysburg Address of political analysis-but you must include the Republicans,they play by the same rules. Now the question is; what do we do?

They used to call those Southern Democrats..."Dixie-crats".

What should we call our ersatz Queens (liberal) Democrats?

And the Queens club's mantle passed from Manton to Crowley.

What is it about the Irish who seem to be always running shady political machines?

Maybe Irish Americans take the same (managerial ?) skills they've acquired over the years through their experiences in the clergy and apply them to politics.

It is quite refreshing to hear someone preach the truth, as bleak and depressing as it may be.

Now the question is; what do we do?

We get up, get out, and vote them out.

I truly believe that if you are an attorney and you run for public office. Be it a full time or part time office, you should shelve your law license until your term is up. Once your term is up and you are no longer in office, you can not, for at least two years, represent, or do any business with any business that does business Government.

Now for those of you that do not like this idea I say to you:

If it is good enough for "Blue Collar" workers such as Plumbers and Electricians when the become City inspectors. It should be good enough for our Elected Officials of the more "Professional" Professions.

Your right, Bishop and Cardinal's are politicians.
Just look at Dolan's savvy TV interviews.
They lobby to get what they want .
Money for their private school's which now cater to more illegal immigrants children and they are able to keep their pedophile priest's from going in front of a public court and face the charges of their crimes.
Instead they get a slap on the wrist and a transfer.
Keep your children safe.

why is one political party's elected going to jail in n.y.c.?

there seems to be no conservative/GOP in Queens serving prison time.

maybe the queens electorate is getting the message.
they need more honest politicians representing them,even if they are PATRIOT TEA PARTY supporters.

they need a chance to put a checks and balances in our local and state system.

do not put equal blame on the opposition,CON./GOP.
the few that are in local government are not able to make their votes count for good and honest legislation.

And you know that DA Brown will not investigate them. Only the Feds go after Dem Party favorites Queens pols.

Yeah, what's with that guy D.A. Brown? "Judge" Brown. "Judge" my ass! That superannuated little dwarf! Hey Brown, do your job already or retire to Florida you incompetent alte kakker.

Imagine having a tough, eyes-wide-open DA instead of this miniscule putz?

anon #4 & #8 : an example of MARXIST distraction from the subject. DISINFORMATION!!!!

"the Queens Machine" has really touched a nerve with the totalitarians.