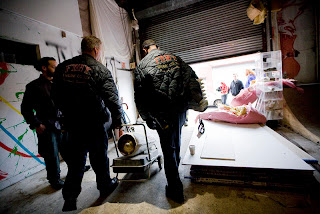 Twenty residents of a Bushwick trailer park were pushed out of their Meserole Street warehouse- and put into the care of the Red Cross.

Van Doren is part of the Brooklyn Project for the Arts, a collective of artists who had lived in trailers behind the warehouse for over a year.

Last month, Long Island Railroad officials ordered their eviction, towing their trailers from the illegally rented lot behind the warehouse.

When the collective moved into the warehouse, the FDNY issued an immediate vacate order citing “conditions imminently perilous to life.”

The NYPD and FDNY were on the scene today to enforce the vacate order and
confiscated several space heaters.
Posted by Queens Crapper at 12:04 AM

So where are the PD & FD evicting illegals from illegal dwellings?

During the "Great Depression" "hobos" lived in clusters of shacks called "Hoovervilles.

Where is our economy improving?

Maybe for the Wall Street "swells" but the unemployment rate hasn't improved...running nationally at (I believe) about %10!

How were these trailer and RV people showering and going to the bathroom ?
These self titled Artists make little or no money, they are people who choose to be broke & live day by day floating.
Many can earn good $$ as professional graphic artists, web-sight construction, professional musicians playing weddings, private partys and stuff but they just wont do it.
These Yahoo's need to go home, I don't feel sorry for them one bit.

"Hipsters"
They aint "Hip" about nothin.

Why cant these bums pick Canada to squat where journalists, liberal arts crackpots & politicians are welcomed with open arms ?

Sounds like sqatters to me. "Evicted", "vacated", they should happy they weren't arrested for trespassing and illegal entry!

--Not if your Black or White

Huh? They were there for a year, after the NYFD "immediately" issued a vacate order?

Minorities have protection from special interest groups, so they don't get touched in this city.

YOUR OWN FAULT ...Your likely playing original music nobody gives a crap about and $$$ paying for your own showcase and production.
I was in a popular 80's band the pay sucked even in those good old days. I got a deal co-writing, playing and producing some BS tunes for a couple of Disney's so called MTV "artists" it got me 2 houses and a couple cars.
Then a brief gig in a NYC TV show

Its not rocket science. I simply gave them what they wanted. Yes it was total teen shit but its what they wanted. I was more then happy to take the money.
Its teenagers between age 10 and 23 that spend money on CD's and the associated clothing and stuff marketed along with all these "manufactured" artists.
Most can not write or play an instrument but they CAN sell music, clothing, sneakers, cellphones.
If you wanna get paid you build whats in demand, nobody gives a dam about your personal music.
To add being a great musician or great singer 2011 doesn't mean anything, Its who is going to $$ buy it that counts ?

The marketing comes first along with being under 30, having good looks and a good Jewish entertainment layer to smooze with the people that run the industry.
I only chose a guitar because I wanted to win a bet with this hippy shit on the stoop with all the girls on my street. It was $25 I could do the same dam thing in 3 months.
I won the bet and got the girls, HIS GIRLS LOL This was 1973
I admit I liked to make noise (July 4th is my favorite day) wanted girls and was dyslexic. A job behind a desk was out of the question.
Today I'm a farmer and restore electronic antiques, I still play once a month, R&B, Beatles & Standard pop dance music etc around Long Island for kicks and $$.

You hipsters better wake up or a good 95% of you are gonna end up aging vagrants with no house deed, teeth or health insurance sucking off my tax $$ ! Just like the dam illegals

Art, beards and Buddy Holly sun glasses alone isn't getting you anyplace.
Artists are not "discovered" anymore guy. They are made to entertain a jackass public.
Don Kirshner is laughing his ass of in hell, perhaps that's why its been a warm spring.

Just yesterday on Vernon B'lvd. in hipsterville...I caught a snatch of cell phone conversation...one hipster to another:

"I think we'll do the Coppola Merlot for our party".

Maybe they shot there $$$$ wad on wine and got evicted...former "Tower folk" now living in trailers.

Yep living in trailers mommy and daddy in Michigan ran out of $$ nor could not land Jr. a scenic artist gig with the local Mafia & Son....burp I mean IATSE (see the wacky Anon musicians post above above who pays OUT $1,000 to play his own music).
The funny thing about that is he or she is likely a native New Yorker "paying to play" because these clueless hipsters spoiled & saturated everything begging to play a gig for free.

Hey, You would think if these hipsters are gonna F_ everything on us they could at least buy local Long Island wine. We have grapes too...fbbblt !