Vito is right to scowl! 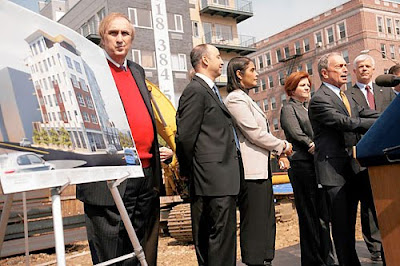 Get a load of Assemblyman Vito Lopez at Mayor Bloomberg’s announcement on Monday that the city is helping a developer convert an old gas station into a new shopping center and luxury apartments!

The Bushwick Democrat is clearly no fan of the proposal for the long-vacant Grand Street lot, thanks to the 50 units of market-rate rentals that it includes.

Babaev said that he’s had interest from a pharmacy, a mobile phone store, and even an International House of Pancakes, but that both Lopez and [Diana] Reyna have lobbied him to include more below-market units.

Well they have a point. Why is the city using our tax money to help a private developer build luxury units and retail? Why are we holding off on hiring cops, but padding the pockets of developers?
Posted by Queens Crapper at 12:28 AM

If you look at the Architects "Rendering" it's more crap for yuppies and hipsters, that should be enough for Vito to Smile about

If the pols are upset about the deal, why did they attend the groundbreaking? Are they that desperate for media attention?

"Are they that desperate for media attention?"