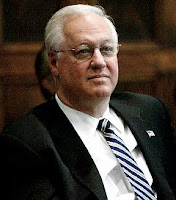 Disgraced former Controller Alan Hevesi will spend up to four years in prison for his role in a massive state pension fund pay-to-play scandal.

Despite his lawyer’s plea for leniency, Hevesi received a 1 to 4 years prison sentence this morning from Manhattan state Supreme Court Judge Michael Obus.

His three children, including Assemblyman Andrew Hevesi (D-Queens) and former state Sen. Dan Hevesi, were in court watching as their father was led away in handcuffs.

"I will never forgive myself,” Hevesi told the judge. “I will live with this shame for the rest of my life."

"I have publicly disgraced myself and caused my family and friends to suffer."

He also apologized to the people of New York.

"I am truly sorry for my illegal conduct,” Hevesi said. “I violated their trust and I take full responsibility for my indiscretion."

The 71-year-old Democrat is believed to be the first statewide elected official to be sentenced to prison for corruption stemming from his job.
Posted by Queens Crapper at 10:54 AM

Too little, too late.

As a dem, after release he'll have the chops to run for governor.

he's not all that sorry Hevesi didn't give up where he hiding the loot.

The un-answered question: "what did Andrew and Dan know, and when did they know it?"

So...he'll probably serve 6 months in jail and get off for good behavior. This is criminal. He should rot in jail for 20 years like the average joe would.

Oh my! With big Al in the slammer, who is going to keep Mrs. Hevesi heavily sedated enough so she won’t talk to the press about big Al’s infidelities?

I wonder what Kruger will get after he's convicted ?

The South Crooklyn electeds should all be investigated , then maybe we'll clean up the City Council & Albany.

Just a slap on the wrist for a slimy politician. They should yank his pension and all the pensions of scummy politicians that are caught fleecing the taxpayers.

Yeah, he sorry, sorry he got caught!

and the beat goes on. who is the next one ?

is not democrat /liberal dictatorship grand ?

Not enough time frankly for the crimes he admitted to. He has to do at least a year in jail minus whatever time he served when he got arrested etc. I hope this experience injects a bit of humility into him for whatever time he has left.

in 1975, A.Hevesi,as well as C.Schumer, was one of the many Queens democrats who voted for N.Y.S.Board of Regents members that advocated the "forced busing "of north queens caucasian residents,8 to 12 th grade children, to Andrw Jackson H.S. in Cambia Hgts.

this was ordered by a federal judge Dooling at the suit filed by the N.A.A.C.P vs. N.Y.C.Bd of Educ.

Dooling ,who dropped dead at a Bklyn corner BUS STOP, was eventually overturned by the Appellate Court.
but the damage in the queens community was already done . many moved and enrolled their child in parochial schools.the cost in American cities was hundreds of millions maybe billions ,wasted.

in, 2007,the U.S.Supreme Court ruled" to bus a pupil because of skin color is UNCONSTITUTIONAL".

social engineering is a crime in my lifetime.

Now wouldn't it be nice if Claire Shulman, Manes' protege, were the next to be indicted and sentenced to a prison term?

Freedom of speech, please ensure that it is upheld.

wonder who in queens is next

"ew-3 said...
As a dem, after release he'll have the chops to run for governor."

As opposed to those "Great Americans" such a Spiro Agnew -who after resigning in disgrace, became a registered Foreign Agent for the Saudis, among others.

He should have stuck to reputable industries..oh, such as tobacco.

Hmm how strange Captain Renault didn't comment on this criminal

Another fine product of the corrupt Queens political machine. Hey, is anyone curious about how his sons were able to leapfrog into high level positions in the senate???

And the death penalty for Anti-Semites like you hateful ARPers.

I had Alan Hevesi as a political science professor in my first year at Queens College in 1993. I can honestly say he was one of the most arrogant, self centered, egotistical men Ive ever met. He wasnt there half the time as he was running in a primary. His Aides who took over the class when he was out were just as arrogant as he was. He was the worst type of public servant, as he expected something in return for whatever good work he did. Justice has been served.

Was Melinda at the sentencing?

Isn't one of Hevesi's sons a cocaine user and Alan used his influence to get sonny boy off?

Yes
Dan. He disappeared suddenly and nobody knew where he went

Is the public that blind? Yet another Queens politician in jail and all we do is bitch on a couple of blogs? Why aren't people lining up at Queens Boro Hall demanding resignations? Vallone for Boro Pres as a Conservative Dem? Have these people seen what his family has done to Astoria? The beat goes on, Pete gets the Boro Presidency, his fathers hand picked person will continue in Astoria, Paulie picks up Hallorans seat and soon all of Northeast Queens will be finished.

Wall Street, which may also explain a few things.

was the Hevesi kid's name "the Pharmacist"?