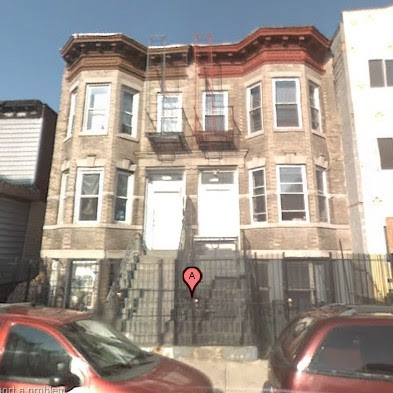 The two-alarm fire broke out on the second floor of 2321 Prospect Ave. in Belmont about 3:30 a.m. and quickly spread to the floor above.

Neighbors said they were awakened by the smell of smoke and that flames soon engulfed the building.

Local residents said the three victims were a family of immigrants from Mexico, a mother, father and their 12-year-old son.

Let's take a look at the complaints about this house:

4/14/11: CLR STS AT THE LOCATION GIVEN 3 FLOOR PROPERTY HAS BEEN CONVERTED ILLEGALLY INTO SINGLE ROOMS (complaint never answered)

11/2/09: NO SECONDARY MEANS OF EGRESS FROM ILLEGAL SRO'S ON 1ST AND 2ND FLOORS. IMPROPER ELECTRICAL WIRING THROUGHOUT BUILDING (LS-4 posted, no other action)

Looks like DOB was on top of this situation...

Stephanie Marsh's family owns the other side of the property, 2319 Prospect Avenue. She heard the family on the third floor screaming.

Marsh's husband, Chancey, told PIX 11 News the property attached to his is owned by the Bank of New York. He said the family was squatting in the apartment and paid rent to a "degenerate man" who was renting units and claimed to be the building superintendent.

Residents told PIX 11 News the two-family house may have been illegally subdivided.

Eduardo Sanchez, a tenant on the second floor of 2321, says so-called landlord has not been seen in at least a month and that just last week, the power to his side of the building had been turned off. He's been using a battery-powered lantern in his apartment since then.
Posted by Queens Crapper at 7:52 AM

I notice the New York Times would never write about these stories. Maybe if they occurred in New Jersey they would, the Bronx doesn't exist in their world.

So what the point maybe of writing on these illegal dwellings that are death sentences for those hiding in them? Where are the Perp walks for the landlord? Where are the community activists and politicians - easting lunch with the owners to discuss campaign contributions???

Welcome to Mike Bloomberg's Sanctuary City. He wants to add a million more people to the population. Where will they live? They will live in places like this.

The 21st, 22nd, and 23rd civilian fatalities since Feb 1st when Mike Bloomberg cut staffing on FDNY Engine companies. Smoke and Mirrors: Same response times but slower water due to less manpower. These are "acceptable" deaths to Bloomberg so he can cut FD overtime. All comes down to the billionaire's dollars.

Schumer, Bloomberg, US Census:
Please tell us whether these people and dwelling were counted in the 2010 US Census.

No enforcement of city rules and regs.

Our taxpayer dollars paying for the illegals hospitalization, education, etc.

The future is here and now.

The response time was quick, but it's never quick enough when apartments are subdivided -- this is the fault of GREEED by landlords and the DOB for not enforcing the law.

No enforcement of city rules and regs.

Really? Can't be true. Cannot think of anyone on city council asked about this in a city of 8 million while the cameras were on.

So it cannot be true.

This situation is due, in part to vacancy decontrol thanks to the gop in the State Senate.

Soaring, unregulated rents since 1997 have squeezed lower income New Yorkers into shit buildings like this.

Even here in Manhattan with two bedrooms going for upwards of 4K/mo 5, 6 or more people are crowding in to afford a place near where they work.

You wanted "Rudy" and those bought and payed-for whores of the real estate industry..this is what you got: Packed-in, bled dry by rent, lax/no enforcement by a deliberately under staffed DOB..and a culture of "go easy' on landlords.

As I have said many times before to friends, this is why we need legal SRO residences again. The NIMBY crowd chased them away and the city was left with a huge population that work, but can't afford a studio apartment.

So how would that have helped a family of 3 living in what would be considered an SRO?