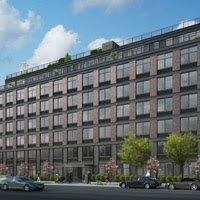 With new developments expected to bring 50,000 residents to Long Island City in the coming years according to the NYCEDC, more retail is soon to follow. King says as the density increases in the neighborhood, the core business districts and surrounding areas will have more shopping options. Currently, Jackson Avenue serves as the main thoroughfare. “When the rezoning went into place and the first projects were built, it was all commercial office space,” he says, describing that little consideration was given to retail because of the area’s largely industrial nature. King adds that other services, such as institutions and schools, are likely to appear as momentum builds.

the only difference in L.I.C. will be the bike lanes. n.y.c.and nys government agencies have moved in already.

Where are they going to put all the cars? I know, let's just make every street a bike lane!