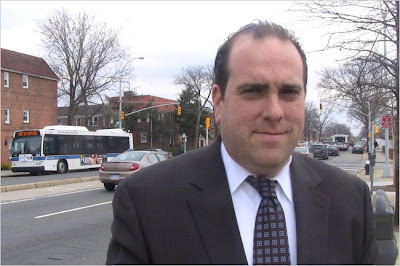 MICHAEL SIMANOWITZ, a longtime aide to Mrs. Mayersohn, wasted no time in publicly saying that he was planning to run for her seat, which would be filled through a special election on a date to be determined by the governor’s office.

Mrs. Mayersohn has denied that her retirement was timed to usher Mr. Simanowitz into her seat, and so did Mr. Simanowitz on Thursday, as he sat in a kosher bakery in Kew Gardens Hills.

He and Mrs. Mayersohn were not “pulling a Manton,” he said, referring to Thomas J. Manton, the late chairman of the Queens County Democratic Organization, who in 1998 announced his retirement in midterm to help his political protégé, Joseph Crowley, win it. Mr. Crowley is now the Democratic Party leader in Queens.

But of course not! NEVER!

From the Jewish Star, by our friend, Sergey:

With state law allowing up to 80 days for an election after a vacancy, Republican and independent candidates have time to establish their names, but are at a disadvantage in comparison to Simanowitz’s Democratic Party support and established ties to local leaders. “I think there are many good candidates possible, but there are not enough troops on the ground. We can win, but we are spread too thin,” said Phil Orenstein, an activist in the local Republican Party.

While no opposing candidates have officially announced their run, Simanowitz promised to make himself known to voters in the largely Jewish district.
Posted by Queens Crapper at 12:14 AM

Shame on Nettie for pulling this - At the age of 87, she knew she was retiring! If she had any sense of integrity, she should have announced her retirement last spring, to allow for an open primary for her seat.
Will we see Toby, in due time, pulling the same trick, with the Party naming Evan to replace her?

But Evan lives in Rockland with his wife who is the Chairman of the Rockland County Democrats. He only uses his phony Queens address to get elected as a Queens District Leader.

Is it illegal to sell Democratic Party endorsements to candidates that hire your consulting firm?

Can someone answer that question for me?

If you don't like Evan as your district leader, you have the right to collect signatures and run against him. Who is stopping you?

oh no I hope netties heir is not put the parkside clients interests over the interests of the district. I hope its not another queens tale.

We need a city wide congress of non-political hacks and their hangers on to build a platform addressing these issues and holding their asses into the fire until they pass bills stopping this abuse.

Until we do so, this will continue unchecked.

Now the the cat is out of the bag it seems that several candidates are mulling the idea of taking on Evan for District Leader and they are planning to make the main issues his residency and his alleged "pay to play" scheme of selling Democratic endorsements.

If nothing else it should bring to light Evan's alleged transgressions.

"Now the the cat is out of the bag it seems that several candidates are mulling the idea of taking on Evan for District Leader and they are planning to make the main issues his residency and his alleged "pay to play" scheme of selling Democratic endorsements."
- - - - - - - - - - -
Good luck! Board of Elections will likely knock any challenger off the ballot . . . .How many challengers will have the $$ to appeal the ruling?

why are no posts about the legitimacy of college point being represented being posted on here??? hmmm.... makes you wonder!!!