What will Christine do? 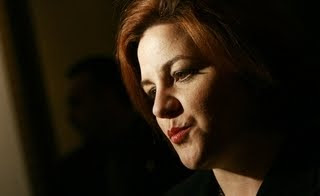 For Ms. Quinn, political calculations can be the toughest part. She's a former tenant activist with a progressive past, but her alliance with the mayor raises questions about what her path to victory might be in 2013.

She enjoys support from the business community, which is largely responsible for the $3.2 million in campaign cash she has collected in the past four years. Mr. Bloomberg is certainly a fan—a Democratic consultant said (disdainfully) that the mayor's team thinks of the speaker as staff—but as his popularity sags, his imprimatur could become a hindrance.

Still, the mayor can help Ms. Quinn behind the scenes. A Democratic insider said that former Bloomberg campaign manager Bradley Tusk, a consultant for Walmart, is telling some clients to get on board with Ms. Quinn. (Mr. Tusk said only that he's setting up meetings for his education reform clients with Ms. Quinn.)

The speaker has been moving to cast herself as independent of Mr. Bloomberg. But even if she bucks her business supporters by opposing Walmart's attempts to open a city store and backing living wage and paid sick days, insiders said, the most crucial labor unions and the Working Families Party would still support Public Advocate Bill de Blasio or Comptroller John Liu for mayor, should either one run.

Instead, campaign experts said, Ms. Quinn must assemble a patchwork of constituencies: small business, gays and lesbians, women, building trades, tenant activists and African-Americans. Smoothing Walmart's arrival would help her with the building trades and some black voters, who want the jobs the retailer would bring.

In other words, she has to tweed.
Posted by Queens Crapper at 12:21 AM

"In other words, she has to tweed."

How is that "tweeding" -
whatever that means.

She will have to build a constituency for her power base. One that is far closer to you and me than the republicans with their oil companies, bankers and landlords.

She is going to pander to certain disenfranchised segments of society and work for the benefit of oligarchs who want to make more money not to make things better for everyone, but only to benefit herself.

"One that is far closer to you and me than the republicans with their oil companies, bankers and landlords."

Developers, bankers and landlords are exactly whom Christine Quinn has dedicated her career as Speaker. In NYC, Democrats = Republicans.

This not the individual who can or will win as Mayor in the greater NYC metropolitan area. Everyone knows her caustic stripes and that does not sit well with even tolerant voters. She is a good if not great political hack able to marshal votes and do good locally, but citywide she will fail miserably and will never be able to effectively connect with constituents.

Christine Quinn made sure that New Yorkers could not have paid sick leave, she has done nothing to save St. Vincent's Hospital, and she did nothing to stand up to the mayor on the disaster that was the Cathie Black appointment. How can the reporter of this article make it sound like there is even a chance that Christine Quinn is going to do the right thing for average working families ? Christine Quinn has a track record that only supports real estate developers. She ain't going to vote for a living wage, she ain't going to stop her use of slush funds, and she ain't going to do anything to bring honesty or integrity to government. The only thing we can count on Christine Quinn for is to do whatever it takes to make more campaign donations from real estate developers, like the Rudin family

She has been sued for back rent 4 times but kids herself she can be responsible handing NYC budget crisis if elected. She sold Mike's and her lie we needed Mike for a third term to help us with the economy. Did Mike and Christine help you? They only helped the Rudin family and other developers, pal who donated big time to Quinn's mayoral run aka kick backs.

I'll bet that "kitty-licker" Quinn switches to caressing Bradley's "tusk" for a spell to gain support in her run for mayor.

Anonymous#4--""This not the individual who can or will win as Mayor in the greater NYC metropolitan area. Everyone knows her caustic stripes and that does not sit well with even tolerant voters.""""


That is where your wrong. This is NYC and Above all NYS. NY'ers are VERY tolerant of the most corrupt public officials. While the rest of the country voted out the most unscrupulous politicians, NY'ers re-elect the same garbage over and over. Such as Bloomberg, Charles Rangel, Andrew Cuomo, Anthony Weiner and et al Christine Quinn. As well as several others. Never underestimate the liberal vote pattern of NYS unfortunately.

- - - - - - - - - - - -
Too late! Liu has already assembled these constituencies, they helped him win the Comptroller's seat. His got them, along with the Working Family party, and now he's after the Jewish votes, quietly making the rounds of temples and synagogues.
Liu is going to be our next mayor.

Quinn will win in the next mayoral election because New Yorkers vote the same shit in over and over again. She's a lesbian and NY loves their gays. She's female. Stupid New Yorkers love to make history. She will be the first female mayor. We'll never get rid of the shit until we wise up and we never will.

the ethnic groups that vote for tyranny government in n.y.c., have to be persuaded to understand that they are destroying freedom for themselves.

"Gangster Government" is in the bookstores now. READ IT!!!

persistent challenges to liberal B/S must be made to the media( the democrat media/complex) and websites that spew leftwing disinformation.

thank you Q.C for enabling us.

you are a real American. enjoy the Easter Holy Days with your family.