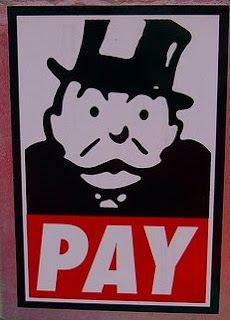 I am 95 years old, have lived through two world wars and economic catastrophes, outlived most of my children and am a widow on a fixed income.

I ask why it is necessary for a billionaire like Mayor Michael Bloomberg to raise every cost in the city. Since Bloomberg took office, my house tax has doubled, my water bill has doubled, my sales tax has gone up and my transportation costs have gone up. I understand tickets have doubled and the police do not take reports anymore of vandalism or break-ins.

Bloomberg does not really know anything about real suffering — otherwise, he would not be so arrogant. I have less to survive on while he has more money than ever. The city does not really do anything better than before, and the response to the Christmas blizzard shows the city does less. There is no more bang for the buck — just a fizzle.

I believe we ought to know as much as possible about a public figure. A public figure makes decisions which affect us all.

I am not pleased with our mayor for the reasons listed. I think he is out of touch.

E. Simanovich
Richmond Hill
Posted by Queens Crapper at 12:25 AM

The great actuarial table is not on Bloomberg's side.

Even with all his quite old and beginning to lose his faculties!

NYC will be rid of him and survive.

It's in our nature as tough New Yorkers to hang in until then.

I hope I outlive hizzoner long enough to see him take his final nap.

Correction to the above:

"Even with all his money, he's quite old and beginning to lose his faculties'.

He got there from city council: ask them.

While you are at it, throw in some more dirty words: Albany and Washington.

Agreed - those retired homeowners on fixed incomes are getting whacked several times over with increasing property taxes and water/sewer taxes. Remember they have gotten little to no SS increase.

I have less to survive on while HE HAS MORE MONEY THAN EVER.


It's no coincidence he became mayor to manipulate the government for his financial gain.

Albany wants to close senior centers but seems to have no problems with funding development.

Republicans in Washington are talking about cutting back on Medicare while the Democrats, instead of fighting that, do useful things like fund a woman's museum to glorify people like Ferraro.

And phony Maloney wants to put up 14 story blockbusting buildings to warehouse seniors so developers can have their rent stabilized apartments.

"Republicans are talking about cutting back on medicare,while Democrats........"

Please show us where you got this "fact" ? in other words ,prove it.

if you read any of the 2700 page Obamacare law,it will state that $500,000,000. Billion in medicare benefits will be cut from senior citizens. the 11,000,000 seniors on medicare/medical advantage plans,(a superb plan that i have ),will also be cut off.

this will take place in 2014,unless the gop/tea party conservatives , manage to defund or repeal the law ,or the citizens remove Obama in 2012.

in addition the seniors who sell their homes ,will pay 4.8% tax on the sale to Obamacare,if their total income earnings are above $200,000. capital gains will also be paid to the government,on the sale.

the law was forced through by the Democrat/liberal party members. no gop members voted for it .

seniors who paid into S.S all their lives did not get Cost Of Living Allowances in two years. the federal government does not include food and fuel price rise into the S.S.,COLA calculation.

if the congress is considering budget cuts on entitlements, it may only affect those under 54 years old.

the U.S can not continue on this spiraling debt increase and
unsustainable spending frenzy.

The problem is that their seniors see only pennies of it!

That's hundreds of thousands of dollars. Do the math!!!