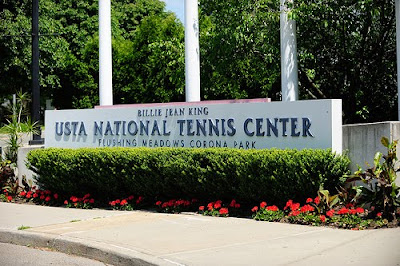 The U.S. Open is poised to expand into an additional stadium at the Billie Jean King National Tennis Center - but not everyone is declaring love for the new court.

The U.S. Tennis Association hopes to break ground on the 3,000-seat stadium this summer at Flushing Meadows-Corona Park, a USTA official said. The association hopes to complete the flashy new court in time for the Open in August so that matches can be televised there.

But the new stadium has raised concerns about increased traffic congestion and parking woes.

"We're not opposed to it," said Pat Dolan, president of the Flushing Meadows-Corona Park Conservancy, a park advocacy group. But "there is a very, very real burden on the people who live and do business around the park."

She is worried that green spaces will be converted to temporary parking lots in the park during the Open to accommodate tennis buffs, she said.

"I would like to see there be a public review of the plan for the stadium," Dolan said.

Photo by By llee_wu on Flickr
Posted by Queens Crapper at 12:20 AM

Shes worried that green spaces will be converted to temporary parking lots ?

This clueless woman should be fired. Its already been going on FOR YEARS.
1000's of cars on the lawns where has she been?

As "president" of the "Flushing Meadows Corona Park Conservancy", Ms. Dolan should be immediately expressing outrage regarding the USTA even thinking about stealing more of our parkland.

The Central Park Conservancy, a real genuinely, powerful advocacy group, would never leave open for discussion any kind of encroachment upon their sacred green space.

By contrast, the FMCP Conservancy which lacks money, must kneel and pray---hoping that the USTA will have mercy upon the park.

Bit by bit, they will eat their fill of our parkland then burp out its "defenders"!

If memory served, it was Dinkins, on his last day as mayor, who signed the document that gave USTA park land for 99 years for $400,000/year, despite the plea by incoming mayor giuliani not to sign to give him time to review the deal. Dinkins was then made Board member of USTA.
Let's also not forget also that CB7 approved the deal.

She's highly intelligent and speaks well. Her intentions are saintly but the results delivered are poor.

Sadly, this is Queens and every politician down the line will rubber stamp the USTA's wishes to expand!

But let's be glad that anyone is left in Queens, a borough of sheep, to speak out.

Jeffrey Chester, of (king maker) Sid Davidoff's law firm first negotiated the sellout of FMCP to the USTA way back when.

The United States Tennis Association will steamroll over any opposition to their expansion.

Not bad for stadiums that get one major use per year. Meanwhile FMCP is a deteriorating mugger's paradise.

Why does this have to be built on the city's greenspace? Why can't USTA just get a lot in private real estate market and build on it?

But let's be glad that anyone is left in Queens, a borough of sheep, to speak out.
----

Well said. You have hit the nail squarely on the head.

Queens is this way because is it a borough of sheep. Those whose foot is on our neck are not all that bright (but have to handled carefully as they are vicious as hell at getting vengeance on those of us who enjoy the delightful sport of poking fun at them)

To throw off their yoke is soooo easy people.

Most hacks are fairly stupid and ignorant in the real world (and you would get that way too with their easy work load, job security, and everyone hanging on every word you say as they fawn over you.)

They are quite clueless when someone stands up to them, especially in those (rare) situations when you can pry them loose from the shields of staff and the press (where the real brains are).

Try it and see what I mean. Go ahead. Its fun once you get the hang of it.

The toughest part is dealing with all the little people who trip you up because the hacks gave them ice cream money to do so.

I thought the city had no money. Bloomberg is closing fire houses, pink slipping teachers and police, yet there is always money for his developer friends. Development should come to a halt until the city gets its finances in order.

There's absolutely nothing wrong with the Flushing Creek. I bathe in it weekly! And the best part? Nobody even notices me.

CB 7 WILL APPROVE: CHUCK AND GENE WILL MAKE MORE MONEY: BITTERMAN AND HER FAT SLOB HUSBAND WILL GO TO EVERY OPEN AS WILL THEIR CHILDREN AND GRANDCHILDEN FOR FREE.

For her admirable role in speaking out, Pat Dolan will get a street named after her. That's all.

it's not an expansion. it's changing two small courts to one larger one. who cares. if it helps improve one of the few positive things queens has to recommend it why all the pissingand moaning.
the central park conservancy has clout because they have members who put $ into getting things done or not done in the park. all we get in queens is bellyaching from blue haired crones. where is the under 60 community leadership in queens?

"where is the under 60 community leadership in queens?"

You know that Flushing and Corona are sanctuary city central and you're seriously asking this?

"2 small courts to one larger one"

The USTA is being allowed to tear apart the original Singer Bowl structure ?

Isn't that original part of the old stadium property of Queens ?

The million dollar question is, would this crap be allowed to occur in Central Park? I think not.

Unfortunately Queens is a borough of sheep, as one commenter has so aptly put it.

Their herders are the machine politicians who promised to represent them but are really sizing them up to be tasty lamb chops for a clubhouse luncheon party.

Did I omit any other political slime?

The root of the problem is that Queens lacks power in both the money and brains departments!

You can always make up for the dollar deficit with some crainial advantage in any battle.

But this borough is totally f----g brain dead!

And the powerful keep on rolling their tanks over our brittle bones!

Lord, have mercy upon our souls!

1000's of cars on the lawns where has she been? Yeah this is all for Citi-field Met games and concerts. When I went to pick up my kid at USTA tennis programs - the police would not allow me access to drive in to pick him up during a Billy Joel concert - I had to park in Flushing Main St and take the train in - walk in to retrieve my young son. ANd to boot the entire green grass areas all around were parked concert goer cars?? Go after the Met's organization - make them build enough parking to house the cars - or NYC Police should enforce the law - no parking in the Park - PERIOD!

USTA - provides free and donation subsidized programing for children through college to promote tennis. There are also programs for adults and they are reasonably priced and welcome everyone to participate. It's a great sport.

Unlike Citi-field which is spectator only and exorbitant - the tennis center is year-round and self-supporting national US non-profit to promote a participatory sport for both sexes. They give access to all of their court regardless - year round and we should thank our lucky stars that they help support $$ and run city wide tennis programs across NYC for the city Parks Dept.

But "there is a very, very real burden on the people who live and do business around the park."

The people who burden those who live in the community are those illegals who flock to the park and set up camp crowding out those nearby resident from using the fields, sitting areas and playgrounds that the illegals monopolize and literaly set up shanty tent cities all summer long.

These folks bath in the bathrooms, undress in public, create environments that promote sexual crimes, theft, robbery and unsanitary conditions for their own children and the general public using the park - enforce the laws NYPD - no one should be parking inside the park yet alone living in the park overnight!

the central park conservancy has clout because they have members who put $ into getting things done or not done in the park. all we get in queens is bellyaching from blue haired crones.
----

True enough. But unlike Manhattan, the developers and hacks that make money off your borough give very little back.

Queens machine politicians just love to laugh at them behind their backs.

But...oh...they think they have real clout...legends in their own minds.

Didn't Pat Dolan get a nice job through Claire Shulman?

Maybe that's why she's soft in her statement regarding the USTA.

Whatever happened to that group that was headed by Joan Firestone which preceded the FMCP Conservancy?

Pat Dolan reminds me of an old parochial school nun I once had at Holy Cross for a religious instruction class.

I keep expecting Bing Crosby to show up at one of her meetings.

If this is the best Queens Civic Congress and the Flush Merde Corona Park Conservancy can do, no wonder Queens is in the shape it's in!

Did you feel an Easter need to be ecumenical? How can you put freshmen Koo and Halloran in the same boat as the Queens Democratic machine?

I really enjoy the flagless poles and burned out lights.........

How can you put freshmen Koo and Halloran in the same boat as the Queens Democratic machine?

Easily! And that boat's capsizing as we speak!