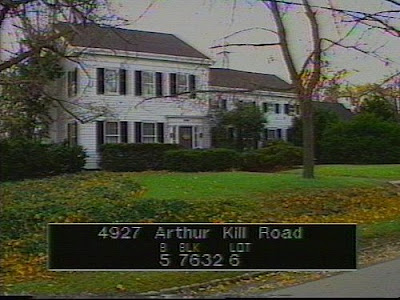 ...the Captain Abram and Ruth Dissosway Cole House, 4927 Arthur Kill Road, Staten Island has been denied further consideration as an individual New York City Landmark by the Landmarks Preservation Commission. Observers report that LPC Chair Robert Tierney stated that the building was too altered and had lost too much of its historic integrity. The building’s owner and local Council member Vincent Ignizio agreed, and both were opposed to the designation. This was reported in amNew York last year as one of NYC’s most endangered.

Why would a councilperson be opposed to a landmark designation in his district?

But yay! a museum building and a high school were designated! Let's keep protecting outer borough buildings that really are not endangered in the first place. (Can't stand in the way of more development.)

Mrs. Ralph Blomeley, great-grand daughter of Captain Cole, said in 1966, “people should be conscious of the heritage this country is built on” and that “through the well preserved, older homes, such an awareness could be gained.” Otherwise, she feared, “what will these new houses be 50 or 100 years from now?”. We are now living on the opposite end of the telescope from Mrs. Blomeley and as one can plainly see from a ride around what is left of Tottenville, if we are to have any sense of where we came from, this house is needed more than ever.
Posted by Queens Crapper at 12:43 AM

sunnyside gardens wasn't threatened by developers but you were behind that.

Spoken like someone who hasn't been to Sunnyside Gardens. There were alterations all over the place.

Take a look at places that are not landmarked: Elmhurst, Old Astoria.

The people were for landmarking in SSG until the polticans, goaded by their real bosses the developers, decided to get involved by sowing seeds of discord and spewing outright lies.

They created divisions that still have not healed.

Well, where is the preservation community on this? HDC? Landmarks Conservency? MAS?

Having a polite tea?

They got theirs. Now get yours sucker!

I am so happy they are subsidized by my taxes.

I look forward to the day when LPC's chairman Tierney is altered beyond recognition...in other words lost his title and out of a job!

And Ms. Mary Beth Betts as not meeting LPC's criteria...in similar words on the unemployment list!

Ugh....
can you imagine Bloomberg's index finger up either one of these dope's ugly asses?

"Just nod NO Bob and Mary to this latest request for evaluation"!

I am outraged that the Four Boroughs, Queens Civic Congress, and the preservationists in Queens remain mute when only safe buildings are landmarked, while historic structures are destroyed.

They have no balls.

Are they not some of the members of that same "PRESERVATION" community you're always referring to.

I thought the plumber capped that waste line.

Did the head of HDC come back from Paris yet?

I hope he will comment on how his borough is getting the short end of the stick, and comment frequently.

who pays for all those downzone studies?

(yes, I always HEAR they are are done for free)


How about yours since you are always criticising the preservation community?

Frankly, some of the stuff you spew seems a little ...

you know very well that sunnyside gardens was, and still is, protected under special district zoning regulations which would have required a ULURP application to add a floor, destroy a building, and technically, even to cut down a tree.

real development pressures are what neighborhoods in forest hills have been facing, not refacing brick to stucco or siding.

in the 30 some odd years since the zoning regulation was enacted, not a single site was ever endanger of being demolished, or expanded without the time consuming, expensive and critical review of city planning, community board, the bp, and the city council. which is why, since the regulation, it never happened.

The vast majority of your neighbors did not agree with you.

Were you at the hearing? I was. It ran 8 in favor to each 1 against.

If you are so knowledgeable, you know this - its a matter of public record.

I have extensively photographed Sunnyside Gardens and can show you exactly which homes were altered (beyond recognition if you trust LPC's usual B.S.) and were still included in the landmarked area. So you're snide "blogger who hears stories in passing" comment was ignorant and uncalled for.

I was at the hearing and i heard all the testimony. someone led the older folks to believe that landmarking would do something to preserve yards, and they ranted about driveways and fences... landmarking does nothing to address these concerns. No one bothered to correct these people at the hearing though, just check them off as being for the landmarking. I admit, I didn't either because it didn't matter to me either way.

i'd like to point out that i never said i was against landmarking, so get off your soap box and pay closer attention to the topic at hand... the LPC in the situation before us, was being criticized for landmarking buildings that were safe from demolition or major alterations. The same was categorically true for sunnyside gardens but the opinions expressed at the time were very different. The community was riled into a frenzy panic that developers were beating on their doors while bulldozers were idling in the streets of Skillman Avenue.

as for your photo essay work, congratulations. i'm sure all 12 - 15 pictures of removed cornices, a scale shingled house, and a half dozen enclosed porches have a special place in your home, but luckily don't take that much room at all. now you devote more room for pictures of the row houses on 72nd ave in kew gardens that were rejected by the LPC while it was designating sunnyside.

I urge you to please go ahead and post some of these altered homes you've photographed on your site. let's see what the worst case scenario was in sunnyside gardens after 30 years of special district zoning regulations. then post a few before and after pictures of homes in the Cord Meyer section of Forest Hills, which has had no protection whatsoever.

lets see if all that effort was put to good use.

Landmarking does protect fences. I have one on my house that I am not allowed to touch without a permit.

And LPC is supposed to designate based on historical and architectural value. But threatened homes seem to have stricter "criteria" placed on them which usually disqualifies them. Sunnyside Gardens AND this SI house should both qualify as landmarks. There have been much worse alterations made to buildings that LPC still managed to find a reason to designate. Queens historical sites meet the bulldozer because of developers with deep pockets so LPC designates firehouses and public schools to make it look like they are "preserving" Queens. It's a joke.

What in the hell or who the hell are
you talking about?

Did you called mamma to complain?

If you can't take it then don't dish it out you phony!

I hate to drag this off topic, but since someone decided to share their own personal story about fences and the LPC, fences were not permitted in the gardens. in fact, hedges weren't even allowed because they would serve to delineate property lines, which is not what the founders wanted.

It wasn't a question about saving fences.

Ant, we always have a standing offer for you 'experts' that disagree with landmarking:

there are dozens of communities that are landmarked. We have offered to set up a meeting (with the press present) for you to rant against landmark designation in a community that has that protection.

To date, not a single person has the balls to stand up to a landmarked community and tell them they made a mistake.

have I seen Ant on astorians.com?


Still trying to figure out who is funding all those (free?) downzoning studies.

"preservationists" argued about the brick and mortar and forgot why Clarence Stein and Henry Wright trekked out into the middle of nowhere to build a community.

In another 30 years people will be reminded of the homes, but not the gardens.

landmarking was a settlement, not a victory in this case.

On a separate note, if you think astorians.com is a forum for political discourse, you are an idiot.

Nobody knows WTF you're talking about except you!

That fella's either senile, off his meds or in Paris too...ha, ha...after smokin' some nasty stuff!