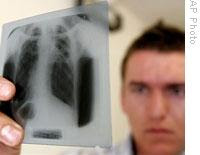 TUBERCULOSIS CASES in Queens rose a staggering 12% last year - the city's only borough where instances of the deadly disease rose even as citywide figures fell to an all-time low, officials said yesterday.

"When you move a population to Queens, essentially you have a microcosm of that country here," Dr. Chrispin Kambili, the city's assistant commissioner for tuberculosis control, said at a forum in Corona.

What makes it especially dangerous is that germs can stay in the lungs for months or years without making a person sick - before suddenly kicking in and spreading the pathogens.
Posted by Queens Crapper at 12:10 AM

Sanctuary cities do not acknowledge the presence and/or existence of third world diseases.

We are prepared for TB - we closed 2 hospitals in Queens to fight the good fight against TB.

Which diseases, formerly eradicated within New York City, are we waiting for to re-appear? Malaria, smallpox, typhoid, cholera?

Maybe they should have retained the old TB hospital at old Queens General.

"Why spend hundreds of dollars to travel to a far away 3rd world country when you can pick up the same virulent strain of TB right here at home
in our bustling vibrant 4th rate outer borough.

And, as an added bonus...The first to respond to our offer get a special guided tour of Queens' bed bug infested neighborhoods".

We are in desperate need of some kind of tourism hook.

Ha, ha, ha...
and what about all those new exotic STD's one can pick up in the Asian whore houses that are abundant in the Flushing area?

Once again Commissar Death and Taxes proudly live up to his title.

Keep inviting those illegal aliens to work in hospitals, kitchens, child care, and let's see what the results of spreading infection will be.

Germ warfare warriors could never have dreamed of having someone like the Commissar be in charge of infecting the population of large cities.

Wait. All those illegal aliens hired as nannies, cooks, maids for the wealthy cronies of the Commissar - how will the commissar explain to them that he brought death and destruction to THEIR families?

He will explain to nobody. When the pandemic strikes, he will be in Bermuda. But, where will all his servants be? Will he trust anyone to cook for him?

What is to happen to all the landlords and fellow tenants of all those crowded illegal rentals?

Nowhere to go for them; nobody to care for them. The hospitals have been closed. The nurses, doctors, technicians, gone elsewhere.

Well, one good result: no more overcrowded emergency rooms filled with illegal aliens spreading their infections to all in the vicinity.

Oops. The commissar and his preferred elites never though the sanctuary city idea through at all.

I can't wait until Ebola makes it's way to our shores!

War is peace,
Freedom is slavery,
Ignorance is strength,
Tuberculosis is strength!

HEY, HOW ABOUT ANOTHER SERVING AT THAT ROVING TACO TRUCK IN ASTORIA?

If you read the article, our wonderful city council member Julissa Ferreras practically does so, by blaming the city for building the Mets a new stadium, instead of giving illegals free health clinics, free condoms, and a $50 voucher to a dollar dance bar.

First of all why doesn't the government make strick laws, to have all tests and shots before allowing anyone to come into our country. So they can get on a plane or a boat and come here to infect our children in the free schools which we provide and when they do get sick they get the free medical, while us tax paying people pay out of our asses. yes queens in the most over populated because we have the damn airports.

A major cause for the rise in TB is partially-treated cases in the homeless population. They begin taking medicine, stop before the infection is cured and then create numerous strains of multi-antibiotic resistant bacteria.

This is the reason it is so dangerous to deny proper medical care to the poor. Diseases spread into the greater population.

This is the reason it is so dangerous to deny proper medical care to the poor.
---------

Making a big assumption that they will make the smart choices if they have care.

1. segregate the population (and yes, making them work so society is not stuck with that bill, too).

Segregation didn't work in the 19th Century and it is not enough now. Typhoid Mary was put on Blackwell's Island yet still managed to get off and infect others.

Quaranteen is better than nothing, but in this day of air travel it is not sufficient.

Whatever happened to enforcing laws such as "no spitting." You can't walk through Flushing without hearing the sounds of people hocking up spit!

Anonymous said...
Ha, ha, ha...
and what about all those new exotic STD's one can pick up in the Asian whore houses that are abundant in the Flushing area?

Amen!!! when I see their disgusting mattresses thrown out on the street I stay far away:(