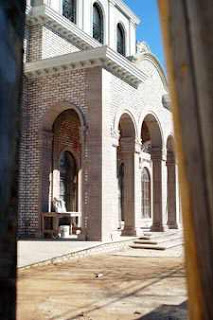 If the new zoning is approved, it wouldn’t undo any of the current structures. However, Dayan said it would have a dramatic affect on the Bukharian community, which has always lived close together. If the rezoning passes, he suspects many homeowners would move to Long Island, where they can buy larger lots.

And, if the problem does not get resolved, the Bukharian Jews are willing to take it to court, he said.
Posted by Queens Crapper at 12:06 AM

Why stop at Long Island ?
let the the lawless savages go back to Russia.

Besides Glen Cove (AKA Suozzi ville)
They cant build those pieces of sh*t on Long Island and nobody wants them. Not even the Jews in Great Neck & Dix Hills.
Those people are horrible !

"..would move to Long Island, where they can buy larger lots."

-And pay -much- higher taxes..which is why they settled on Queens to begin with.

Why is that Bayside can pass very strict zoning rules..and enforce them, while F.H. is threatened w/suits.

Could it be that N.E. Queens has residents that are better educated, have a degree of aesthetic sense and are not trying to bulldoze their way to power?

Got to Long Island. GO!

I seriously doubt that Bukharian Jews would flee Forest Hills. They invested too much in the neighborhood, with synagogues, businesses, and yeshivas.

Maybe a few Bukharians would flee, but not the entire community.

So this is an idle threat and should be ignored.

"Could it be that N.E. Queens has residents that are better educated, have a degree of aesthetic sense and are not trying to bulldoze their way to power?"

Actually, no. We have our share of creeps who don't give a damn about zoning laws. And look at the Broadway/Flushing area. They are having a HUGE problem there with the Asians moving in that are ignoring the covenant that covers the area.
The problem is usually with recent immigrants whether it's Asian, Italian, Greek or whatever. They want to impose their wacky taste in our communities and have no clue(or don't care) that it doesn't fit.
And if you say anything, you're just jealous.
I know for a fact that in Italy, a builder, if he pays off the right city official, can pretty much build what he wants. As a result many of the newer communities are poorly planned, congested and look just atrocious.
I'll bet our new immigrant neighbors bring that mentality here.

And Italian Girl, they know that campaign donations to the klubhouse will make them immune to laws.

The klubhouse knows their horrid taste will drive out the Middle Class whiners.

Its a win win situation.

Let them leave! the russian jews are robbing america and banking on it. right away they say they will sue, well let them try and everyone should back up the system and the law to protect your community from such ugly structers. I think that has to be the ugliest thing I've ever seen.

Don't tell us you need a 3 storey house to fit in 3 generations of family. We all know the real reason behind this scheme. Sounds more like you need a dormitory instead. Follow the rules and regulations and have respect for your neighbors-- if you don't know what respect means, look it up in an American distionary.

On one hand, I am hopeful that these individuals will pack up and head off to greener pastures. The damage done to Forest Hills and most of Rego Park is simply unforgivable. However, there is also the cold reality a previous poster mentioned that these Buk Jews have already spent a considerable of capital in altering Forest Hills. Large scale movements of people tend to take time and considerable energy. They would have to sell these properties. The obvious problem is to whom? I cannot believe that too many people would be interested in purchasing these unique custom built homes. And, of course, what about the less fortunate members of the Buk community--the ones who buy the 20 x 100 townhouses and entomb themselves behind five foot brick walls? There is no way they are going anywhere with the way they destroyed those properties . . . . A curious question: Assuming that these Buk Jews leave, who replaces them? Imagine the Buk Jews serving as a bulwark against other, more destructive groups . . . .

They would have to sell these properties. The obvious problem is to whom?

If they moved from Russia, they can move from a community.

Why sell? They just make them into guest worker dorms and get even with their neighbors.

Please take the houses with you when you go.

I can’t imagine anything more (that’s not felony) these hacks can do to torture their neighbors.

---greener pastures ?
NO Way !
To these people green space is wasted space and maintanience. Rake leaves, or pay a gardener...nope not happening

They should all move out to California, I have the perfect place !
Its about 10 miles just west of Yucca Valley.
Lovley strip of vacant strip of valley land about 3 miles wide by 200 miles long North to South.
The Buks can build all the "monuments" they want and nobody will care.

I personally been down there during the Yucca Grub Steak fest's.
Its like another planet or Egypts vally of the Kings.
Its PERFECT for Bukharian's


You can see it from atop Joshua tree monument-
--Look down and West.

Tend your goat herds and live in ignorant tribal bliss.

A lot of Asians are selling out
(after approximately being 3 years in).

The Asian population of the area does not exceed about 12% (And that includes south Asians).

Their homes are beginning to turn over at as fast a rate as their businesses on Northern Boulevard.

I guess they misjudged the area as
being predominantly Asian.

I was in Forest Hills Gardens yesterday.

Imagine what these Buko-barbarians would do there if they had free zoning reign as the have in the Cord Meyer district?

You can transplant a peasant but you can never take the hill-billy out of him until, perhaps, the next generation!

Low class is low class and these tribal throwbacks are the lowest wrung on the socio-educational ladder.

"A lot of Asians are selling out
(after approximately being 3 years in)."

But isn't that happening all over? Even in my neck of the woods people build their dream houses only to sell in like two or three years. That's where I'm seeing the most "for sale" signs - on the McMansions. What's up with that?
My brother is looking into foreclosures and there's a number of them in Broadway/Flushing. In fact, many of the foreclosed homes have Asian names with MASSIVE mortgages.

True...
most of the foreclosures in Broadway/Flushing are, in fact,
predominantly Asian.

" The proposal is now undergoing review by the Queens Borough President’s Office. From there it will move to the City Planning Commission, then on to the full City Council for approval."


Fuck. In other words, there is still plenty of time for the remaining home to be put under the Russian Jew Bulldozer and flattened before this even gets on the books.

"Why is that Bayside can pass very strict zoning rules..and enforce them, while F.H. is threatened w/suits."

These areas in Northeastern Queens never had a large Buk Jew population, so never needed to build 3 stories lot line to lot line. The people in these neighborhoods WANTED the zoning changes to prevent the Forest Hills buildups from happening. And I am glad of it. I guess you can say the people are smarter. Not all, but most.

Bukharans,we would be pleased to chip in for a charter flight on Air Uzbekistan if you don't want to assimilate and be good neighbors. Whatever capital they've contributed has caused more deterioration in the quality of life in FH than good.

As for our other immigrant denizens of Queens, they have no intention of staying here. They're only looking to maximize the amount of money they can grasp in their greedy hands and then go back to wherever. It's interesting that they don't act like slobs in their land of origin. They spit, litter, flaut our laws, impose their most noxious customs on the rest of us, freeload on the taxpayers by demanding free everything, and show contempt for those of us who were born here. Then they scream prejudice if we react to them in a negative manner.

HELLLOOOO!!! Melinda, where are you?