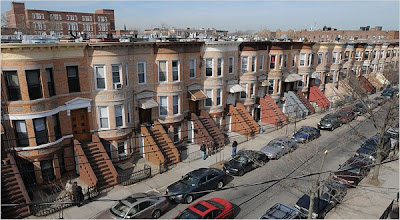 From the New York Times:

Many of Ridgewood’s streets are lined with nearly identical rows of bay-front town houses and six-family apartment buildings — most built of warm-yellow bricks and decorated with diamond brick patterns or pressed-metal cornices — that give the neighborhood a sense of place as cohesive as any brownstone block in the Manhattan and Brooklyn areas that more typically attract preservationists’ attention.

But unlike the brownstones built for New York’s gentry, Ridgewood’s historic buildings were made for laborers — mainly for brewery workers — and the neighborhood, on the Brooklyn border, adjacent to Bushwick, has remained largely working- and middle-class.

In September, the city’s Landmarks Preservation Commission is expected to approve landmark status for both the theater and for several blocks of ornate six-family brick houses.

Here's a line that threw me for a loop:

Queens has fewer official landmarks than any other borough, partly because its buildings are relatively new — much of it was farmland until well into the 20th century...
Posted by Queens Crapper at 12:36 AM

That was part of a larger problem, residents say: Queens has fewer official landmarks than any other borough, partly because its buildings are relatively new — much of it was farmland until well into the 20th century — and partly because its history was long ignored by a Manhattan-centric landmark-designation process
-----------

Yet another example that the preservation community (read Manhattan and downtown Brooklyn) and the Four Boroughs (who knows except its local) have their collective heads up their ass.

EACH YEAR, from Waldheim to Old Astoria, 100, 150, 200 year old buildings are torn down without a wimper from the mainline groups.

Garbage like this is written because there is no effort at making the public aware of either the heritage, or the benefits to preservation.

Perhaps if they could tear themselves away from the wine and cheese displays, or trips to Paris, they just might have to get to work and address these festering ills.

It not only 'a Manhattan-centric landmark-designation process,' its a Manhattan-centric preservation community (that writes grants for the five boroughs, takes the money starving local grassroots groups that actually could do something and spend it all on their backyards).

So very ignorant. Queens, as well as Long Island has had settlement from the days of the Dutch--just as long as Manhattan has.

I live in Old Astoria and have seen 150 years worth of history disappear within the last 5 years.

Perhaps these "preservationists" could read some New York history for a change. In the last few years books such as, "Gotham," "Native Americans", and several historical novels and histories by Pete Hamil, have all topped bestseller lists and been available in every library in the city for those who care to know.

Since when has newbie Michael Perlman been elevated to the heights of a grand guru possessing an "encyclopedic knowledge" of theaters?

I thought that distinction was reserved for the Theater Historical Society"!

So the "diner king" now seeks a new title of theater nabob?

Losing ALMOST ALL of its most important features it was tortured into a state of architectural banality.

Better for it to have been demolished outright
than to suffer such prolonged humility ...then eventually its death.

Yawn...with preservationists like these self appointees popping up each year, Queens can continue to look forward to its loss of landmark worthy sites.

Do you really think that the owner of the Ridgewood Theater will honor his "promise" to keep all the interior architectural deatails intact?

He plans on converting the space into 3 screens!

Oh...maybe he means to give you some of the elements he tears out as a souvenir for your "efforts".

Give that boy a double ice cream soda on us.....he'll be needing it.

Excuse me while I down another glass of Cabernet!

The more that pseudo preservationists like the two Jeffs & the one Michael gain headlines but without any real successes to back them up....the more and more that the people of Queens will continue to be lulled into believing that our historic sites are in capable hands.

These mamby-pambies are among the most dangerous foes to real preservation out there today!

They are mere placebos in place of effective prescription medication.

The chronic disease of demolition WILL NOT be cured by these weak-kneed publicity seekers!

The more that pseudo preservationists like the two Jeffs & the one Michael gain headlines but without any real successes to back them up....the more and more that the people of Queens will continue to be lulled into believing that our historic sites are in capable hands
------------------

These fellows mentioned are perfect to represent Queens as far as THEY are concerned.

Perhaps if you spent more time sweating at your job than you do stroking your....uh....er...keyboard,
you too might be able to save up enough pennies to book a trip to Paris proper...in France!

In Queens the clubhouse rules and THEY LOVE preservationist newbies like Perlman and your two Jeffs whom they can steamroll over with little effort.

These pen wavers like Jeff & Mike ought best to take up the sword instead.

Nah....they're just bloodless wannabees themselves
who faint at the sight of gore!

Barry is not free. In true Terrible Terri clubhouse fashion its paid with borough hall funds, I mean taxpayers dollars. And most of the money is not going to Barry ... more on this later (wink) right Terri?

That is why Jeff had to charge.

You are right! Wrong focus. We should look at who is funding the Paris trips.

I tell you what Mr. B.S. Artist
you sound like you're in need of a good vacation yourself.

Once again... nobody knows WTF you're talking about...dig?

So in a spirit of generosity I'll agree to buy you a round trip bus ticket to Paris, New York if you'll reveal who you are and explain in a logical manner WTF you
mean by "who's funding the Paris trips".

And do get a good night's sleep.

Sent via Blackberry on my way to work...so pardon any errors in advance:

You keep up your off the issue cryptic posts and
I'll keep on returning the favor.

Not mine...
but perhaps your nerves "B"?

A little advice:
Don't continue to sling it,
if you cant take it.

And NO this is not "P" who's posting
just a friend of his!

Free? Really? Maybe I can tell my neighbor who is footing the bill.

We can get a refund, right?

Paul does community studies without charging?

That is great news. I want to pass this on to my civic and perhaps we can retain him.

I would suggest the other posters of the blog to do the same. He did a study for my co-worker's neighborhood and everyone is pleased.

He does great work.

I would find the “late-ditch” involvements of Mr. Kerzner in any preservation movement to be quite amusing, if they were not so self-serving. Years ago he decried the “quiche crowd” moving in to his Ridgewood neighborhood, and now, 30+ years later, when property values have stagnated in comparison to other similarly developed sections of the city, he has discovered “preservation.”

A cursory Google search of the gentleman provides a fascinating array of information –from his own home ownership, his personal real estate business, his dealings as a real estate (and estates) attorney, his management position in Con Ed’s Renaissance Housing Program (when will someone investigate this one?) – to his assorted past and present positions in the Ridgewood Home Owners’ Association, Community Board 5, Queens Civic Congress, Greater Ridgewood Restoration Corp., and even recently, as a director of the Polish and Slavic Center. It would seem that he, and the small band of regulars whose names are habitually listed alongside his, are more concerned with capturing and keeping the European spillover from Williamsburg and Greenpoint now gentrifying Bushwick, rather than its now pushed-out Bushwick exiles.

He blew it with the “quiche crowd” and is trying to make it up with the “kishka crowd” to serve his own interests and investments.

I wish the Anonymouse bloggers would at least come up with occasional pseudonym...

To the individual citing the lacking instances of Queens press in the NY Times: try using its search engine to look up "Queens politician under investigation" or "Queens politician indicted." Peruse the results for the last 12 months -- that is if you have time to surf the thousands of articles that result.

Perhaps its time to look inward.

Oh really?
The battlefield is no place for such "idealists".

Safer for them to sit at home with mommy pounding out words online!

Except for "Don Quixote" I have no use for hapless dreamers who con the public into believing they're a force to contend with in the field of preservation.

Give me 300 Spartans
rather than two full armies composed of jerk offs!

Neither the young man nor Don Quijote strike me as “hapless” – continued progress requires the occasional idealist or visionary to motivate a populace to think, see (in the philosophical sense) and engage.

It is odd that a self-described laconophile would show an interest in preservation, given his/her own “battlefield” analogy and its consequent destructive aspects – unless it is reflecting some flavor of self-preservation. The small band of regulars that continue to “battle” and deal in this real estate arena are indeed, as Herodatus described the Spartans, “rustic, hesitant, uncooperative, corrupt, and naïve.”

Considering the ultimate failures of Sparta, perhaps Anonymous might do well to tilt less at windmills, and at minimum, consider a more cogent argument or metaphor.

Whoops, that should have been "Herodotus."